Building a Boss 302 for Street Use

Reviving the Boss: KT Engine Development gets its hands on an original Boss 302 and brings it back to life 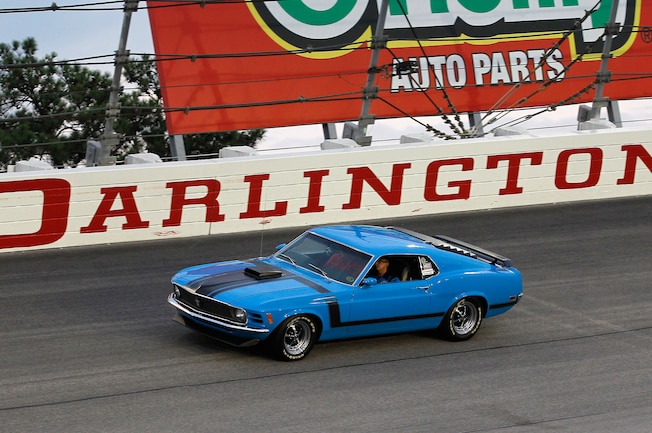 Ford's original Boss 302 engine was only produced for two years (1969 and 1970), but it was so cool it’s understandable why the little V-8 has gained such an elevated position in Ford mythology. Plus, these days a true Boss 302 engine is about as common as a supermodel who sits down to eat a dozen Krispy Kremes, so that probably has something to do with it too.

When we heard that KT Engine Development in Concord, North Carolina, was rebuilding a real-deal Boss 302, we headed over in a hurry to get a look. Unfortunately, the shop was on a tight deadline (the Mustang this engine came out of was going to be an honorary pace car for a NASCAR Cup race) and we missed out on much of the build, but owner Ken Troutman was willing to share some of the photos he took from the documentation he does for practically every project.

Many think that the Boss 302 was simply a Windsor block fitted with Cleveland heads for Trans-Am racing. Actually, the Boss preceded the 351 Cleveland by a year. The Boss cylinder head is practically the same as the Cleveland cylinder head—including valve angles and head-bolt pattern—but the Boss heads route water to the same locations in the block as a typical Windsor head. Besides the cylinder heads, the block has greater strength despite its lighter weight and thin-wall design thanks to a high nickel content. It also came with four-bolt mains and screw-in core plugs. There were other small changes, such as the number of valve cover bolts (eight on the Boss, six on the Windsor), but the last big difference is that the Boss had its very own taller aluminum intake manifold to help feed the engine with plenty of air and fuel at racing rpm where the standard Windsor 302 would have been wheezing and sputtering.

Of course, the Boss was purpose-built for racing. Ford did put it into street cars in order to comply with homologation rules, but anyone being honest will admit that it doesn't make the best street engine ever. The big cam, combined with lots of cylinder compression, meant the engine wasn't happy until it was high in the rpm range, and that typically doesn't make for a fun drive to your local cars-and-coffee meet-up.

So when the engine in Tom Hennig’s 1970 Boss Mustang flattened a couple of cam lobes, he and Troutman decided that a slight update was in order for the Boss engine as part of a rebuild. The plan they put together was to keep everything that makes the Boss 302 unique while also adding a few modern upgrades to make the engine more enjoyable on the street while still maintaining (or even improving) power and durability.

Overall, the final product turned out very well. Troutman knocked the compression down from the factory 10.5:1 down to 9.5:1 and reduced the camshaft duration to make the engine easier to drive at lower rpm’s, and still managed to bump the power from Ford's factory ratings of 290 hp and 290 lb-ft of torque all the way up to 370 hp and 350 lb-ft. Now that he has it back in his Mustang, Hennig says the car is more fun to drive than ever. We're just glad to hear an original Boss is still on the street doing its thing.

01. Tom Hennig's beautiful 1970 Boss 302 Mustang was chosen to be an honorary pace car for the NASCAR Bojangles Southern 500 race at Darlington last year—and then the engine killed a cam lobe slightly over a month before the event. KT Engine Development got the Boss rebuilt in time with a few modern touches to make it more street friendly.

02. Engine builder Ken Troutman of KT Engine Development said this engine had obviously been apart a few times. The cylinder bores were already at 4.040 inches, but Troutman says he was able to get the cylinders to clean up removing only a minimal amount of metal in the cylinder hone.

03. One critical difference between the Boss 302 block and a regular Windsor block is that the Bosses all came with four-bolt mains from the factory.

04. If you are looking for a way to visually identify a true Boss block quickly, just check the core plugs. Real Boss blocks have screw-in plugs.

05. The original Boss crank is forged steel and not cast like a standard Windsor, so it was kept. Over the years it has likely seen some abuse, and the journals have already been turned down 0.010 inch on the mains and rods. Thankfully, however, all Troutman needed to do for this rebuild was to polish the journals and rebalance the crank for the new pistons and everything was good to go.

06. Troutman kept the factory high-strength Boss connecting rods, but mated them with custom pistons from JE. The original rods require a press-fit pin, so there are no wire locks on the pistons.

07. Here the rings have been gapped and are sitting in the correct cylinder bores ready to be placed on the pistons. Troutman chose a 1.5/1.5/3mm package with a moly top ring and a Napier second ring for good cylinder sealing.

08. After checking that he has main bearing clearance between 0.002 and 0.0021 inch, the crank is laid in place and the main cap fasteners are torqued down.

09. Here, the custom JE pistons are in place. You can see the dish in the pistons Troutman used to get the compression down to 9.5:1 from the factory 10.5:1. That should make the engine much less finicky when it comes to carburetor tuning, and easier to drive in general.

11. The lifters chosen are linked solid rollers from Crower, a major improvement over the flat tappet lifters from the factory. It is also cool that Crower's link-bar design is tall enough to clear the lifter bosses so that clunky dog bones and a spider bar aren't required.

12. The cam was ground four degrees advanced with a 108-degree lobe centerline, so Troutman degreed it into the engine straight up.

14. Lots of effort was made to keep everything on the outside original, so the factory pan was cleaned up and reused.

15. The externally balanced setup was retained, so a specific harmonic damper and flywheel must be used to keep the engine in balance.

16. The original iron heads are reused, but the valve springs have been greatly upgraded. These are Comp Cams’ PN 26926 springs designed for LS engines. Comp also manufacturers the lightweight steel retainers mated to the springs. A cool feature is that the Boss heads came with screw-in rocker studs from the factory.

17. With the heads on the block, the stainless 1.8:1 ratio roller rockers are bolted up and lashed. Since these heads share major dimensions with Ford's Cleveland heads, Troutman chose these rockers from the Cleveland section of the PRW catalog.

18. Once it was cleaned up, the factory aluminum intake looked great. The taller intake requires a slightly shorter carb spacer to keep everything underneath the hood.

19. One of the few exterior details not original is the Pro Billet MSD distributor that provides the spark. But this is one of those times that modern technology just beats the pants off of an old points distributor, so it's definitely worth it.

20. On the dyno this little engine produced 368 hp at 6,500 rpm on pump gas. Actually, that may not even be peak power. The horsepower numbers were still climbing when Troutman pulled back the throttle at 6,500 rpm, but since this is a piece of history and not an all-out race engine, neither he nor Hennig wanted to push the engine too hard and risk carnage.