Few of us in the hobby can remember a time when the FE series big-block wasn't around. That's because this brute performer was introduced way back in 1958 in the Ford, Mercury, and Edsel. Back then, the FE was only a fraction of what it would eventually become. In the beginning, there were but three versions of the FE displacing 332, 352, and 361 cubic inches. The 332 and 352 were Ford and Mercury mills, and the 361 was Edsel only. The all-new FE offered a wealth of potential because there was room to grow. It was a huge, mighty Y-block design with room for bore and stroke growth, and so it went. Those hefty block skirts offered abundant bolstering for the crankshaft main bearing journals, which would become a significant feature later on when the 406 and 427ci engines became cross-bolted main bearing affairs.

The FE engine story isn't as complex as you might imagine. There were only nine displacements--332, 352, 360, 361, 390, 406, 410, 427, and 428 cubic inches. There was also a family of medium- and heavy-duty truck engines based on the FE series of engines called "FT," which stands for (you guessed it) Ford Truck. The FT engine family included the 330ci HD and MD, 359, 361, 389, and 391ci. There is some interchangeability between the FE and FT, but one has to be careful in a quest for parts because the FT looks virtually identical to the FE externally. Though a lot of internal parts look the same, there are important differences we will get into later.

FE (which means "Ford Engine," not Ford-Edsel, nor Ford Engineering) variety comes from a broad selection of bore and stroke sizes to achieve cubic-inch displacements. The 332 and 352 are fraternal twins, virtually identical engines with 4.00-inch bores. Where they differ is stroke--3.30 inches for the 332 and 3.50 inches for the 352. Those first '58 FE engines sported mechanical lifters, not hydraulic, which meant their blocks weren't set up for hydraulic lifters.

As FE production got underway, Ford quickly learned that mechanical lifters were not the ticket for luxury cars, especially in light of the fact that the competition had hydraulics, which required less maintenance. Mid-year 1958 FE blocks were drilled for hydraulic lifters and equipped accordingly.

Cross-bolted main caps became a necessity due to catastrophic failures in NASCAR competition. Intense vibration at high revs worked the main cap bolts loose on the track. You can well imagine the result. Cross-bolting the main caps vastly improved the reliability of the 406 and 427.

Though mid-year 406s and all 427s were cross-bolted main blocks, both were different castings entirely. In fact, the 427 block is a completely different animal because it sports huge 4.23-inch bores, unlike any of its FE siblings, using the 390 and 406's 3.78-inch stroke. This factor makes the 427 a deep-breathing, big-bore, short-stroke, high-rpm screamer. What may surprise you is the 427 block is iffy about being bored oversize because these huge bores push the design limits of the FE block. When it's time for a bore resizing on a 427 block you should be able to go .020-.030-inches on the overbore, but you must sonic check the wall thickness and if need be, sleeve the thin cylinders.

We often hear about 427 "Side Oilers" in Ford performance circles, but the lion's share of 427s were top-oilers, meaning the oil galleries ran down the center of the block, parallel to the crank and cam. The Side Oiler was a completely redesigned 427 cross-bolted block introduced in 1965, sporting a generous oil gallery down the left-hand side of the block to keep the main bearings amply supplied with oil at high revs. These blocks are easy to identify. Note however that early '65 castings look like a side-oiler, but were not drilled out, making them a top-oiler block.

We suggest avoiding the 427 for reasons of cost more than anything else. These blocks are very expensive when they surface at a swap meet, which means your project will likely be centered around the 360/390 block.

Another block choice for FE fans is the 428. The 428 sports 4.13-inch bores (like the 406) and a long 3.98-inch stroke. Translated, that means torque. Your 428 project doesn't have to be expensive. Quite a few '66-'70 Fords and Mercs were fitted with the 428-4V, which leaves affordable cores out there. There is a difference between the standard 428 and the 428 Cobra Jet block. Differences lie mostly in the main bearing webbing, which is something you must be mindful of, depending upon how you will use your engine.

Rotating/Reciprocating Mass
Now that we understand FE blocks, what will we fill ours with? The only FE engine ever fitted with a steel crank was the 427. But not all 427s were fitted with a steel crank. How you intend to use your FE mill dictates whether you're going to need a cast-iron or steel crank. Most street applications will perform fine with a cast crank. We suggest the use of a nodular iron 390 or 406 High Performance crankshaft. These can be identified by their casting numbers (C1AE-A, C1AE-D, C1AE-H, C2AE-B, C3AE-B, C3AE-E, C4AE-C, C4AE-D, C5AE-C, C6AE-A, and C6AE-C). There are also two 406 numbers to watch for--C2AE-D and C3AE-D. These cranks will net you the 3.78-inch stroke common to the 390, 406, and 427.

There are two other basic crankshaft choices for FE buffs. The 3.50-inch stroke crank common to the 352 and 360 is one choice if you're seeking a high-rev, short-stroke big-block. Fit this crank in a 390 block and achieve 360 cubic inches from your destroker. The other crank is the 3.98-inch stroke crank, which will pump a 406 up to 428 cubic inches or a 390 up to 410 cubic inches. The choice is yours.

If you must have a steel crank and cannot find (or afford) a 427 piece, there are alternatives from the FT camp. The FT crank differs from the FE because it has a larger diameter snout and thicker flywheel flange. One other thing. The FT is an externally balanced engine, like the 410 and 428, requiring the proper flywheel or flexplate. Keep this in mind during your build. The FE crankshaft front snout is 1.38 inches. The FT snout is 1.76 inches, which creates accessory compatibility problems. The best advice we can offer is to have the FT crank snout cut down to 1.38 inches by a reputable machine shop. Ditto for the flywheel flange. The 330ci Heavy Duty FT had a forged steel crankshaft with a 3.50-inch stroke.

Connecting rod choices are more involved for those building FE engines. The most important thing to remember about FE connecting rods is there were only two lengths--long (6.540 inches) and short (6.488 inches). Long rods were used in the 332, 352, 360, and 361 engines only. The FT 330ci truck engines also had the long rods. Short rods were used in everything else in the FE and FT lineups.

In the early years, the 352 and 390 Police Interceptor short rod was the way to go before the first LeMans rods surfaced in 1965. The Police Interceptor rod had 13/32-inch bolts until 1963 when Ford stepped up to a 3/8-inch bolt. The High Performance and Police Interceptor rods are easily identified by their wide beams, which are wider than the standard FE short rod. The LeMans rod is clearly different than the Police Interceptor rod because it has cap screw bolts that screw into the rod instead of a bolt-and-nut affair. The LeMans rod evolved with the needs and demands of Ford's racing effort. There are three basic types: C5AE-C, C5AE-D, and C6AE-E. The C5AE-D and C6AE-E rods are the best LeMans rods to use, although previous versions will suffice. In 1967, Ford conceived the C7OE-A NASCAR rod for the 427, which is 0.080 inch wider and mandates use of a compatible 427 NASCAR crankshaft. If you're going to use this rod on anything but the NASCAR crank, you will have to cut the journals 0.080-inch to make room for the NASCAR rod. The 428 Cobra Jet uses LeMans rods.

However, bolts with shorter heads must be used to clear the 428 block. The 428's added stroke brings the bolt heads too close to the block wall.

On Top...
Another issue facing the FE builder is cylinder heads and induction. The FE engine family yields a wealth of options. The most important thing to remember is compatibility. For example, 427 heads offer great breathing potential, but they struggle with fit on a 390 block because larger valves will not clear the 390's cylinder bores, though you can have the bores notched for valve clearance. A good compromise is the 390 High Performance or GT head, or the 428 Cobra Jet head.

One of the most important things to remember about FE heads is exhaust manifold bolt patterns, especially if you're running a Fairlane, Comet, Mustang, or Cougar. The Fairlane/ Mustang/Comet/Cougar GT head had diagonal bolt patterns due to tight clearances. This is important to remember when you're shopping for heads for these compacts and intermediates.

If you're fortunate enough to be building a 427, you have several cylinder head choices--Low Riser, Medium Riser, High Riser, Tunnel Port, and SOHC variants. The Low Riser isn't a very popular head-and-intake package, although it will perform well for street use. The most popular induction/head package is the Medium Riser. The Medium Riser gives a good balance of mid-range and high-rpm torque. It's good for the street and excellent for the racetrack. The High Riser package looks terrific, and it's quite at home at 7,800 rpm. This manifold and head combination are married. They must be used together in order to have a proper port match. We do not suggest this combination for the street. The Tunnel Port and SOHC heads are like hens teeth and are priced out of most build budgets, but if you want people to talk when the hood is raised, they are viable build options. 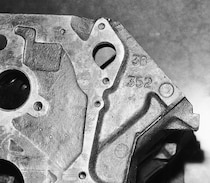 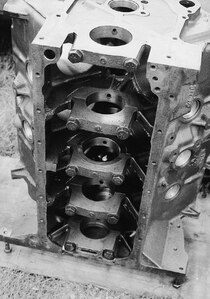 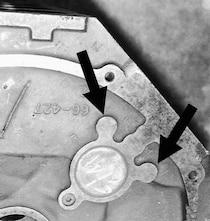 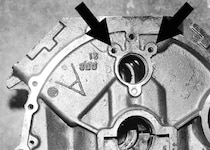 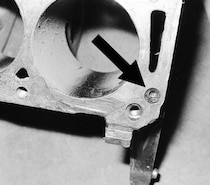 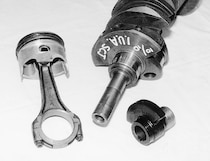 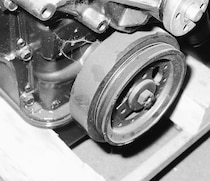 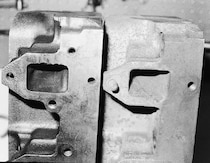 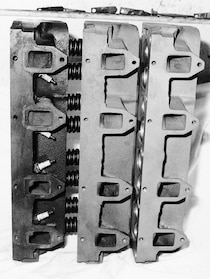 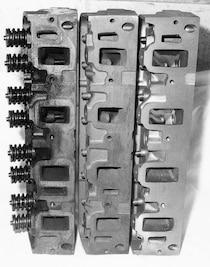 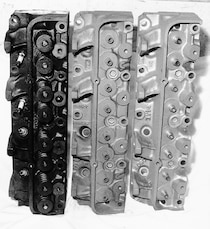 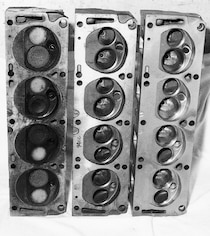 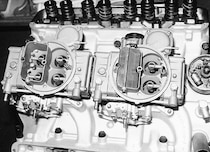