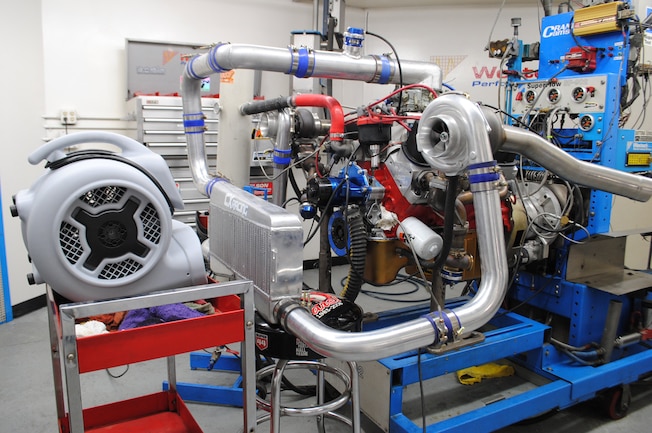 Math makes everything seem easy. If we add 7, 2, and 1, we obviously get 10. But there is a difference between getting 10 and getting the perfect 10; The perfect 10 for us was a motor that produced an honest 1,000 hp.

Obviously there were a number of possible routes to achieve this goal, but for this buildup we chose math. We selected a starting displacement of no less than 7 liters. To this 7 we added a pair (2) of turbos then tossed in a single (1) carburetor. Mathematically this combination put us squarely at 10, but that was only part of the goal. Having the combination exceed 1,000 hp required perfection from each portion of the formula. Just any 7.0L motor wasn’t going to get the job done, nor would just any turbos or carburetor. The success of the buildup required building a serious stroker, then topping it with efficient turbos and finishing it all off with a badass blow-through carb.

Though boost can be used as a bandage for a botched build, the best boosted motors always start out as healthy normally aspirated motors. The more powerful the starting point before boost, the less boost required to reach a given goal. Less boost means lower charge temps, more power, and reduced likelihood of detonation—all good things.

With this in mind, we decided to go big on the displacement then feed the stroker motor with plenty of efficiency. Starting with a Speedmaster four-bolt block, we machined the 4.125-inch bores to accept forged (dished) pistons from Probe Industries. The pistons were hung on a set of Speedmaster forged rods and 4.0-inch stroker crank. The resulting displacement checked in at 427 ci.

With displacement checked off the list, it was time for some efficiency upgrades. The short-block was augmented with a Comp XFI cam. The dedicated stroker grind offered 0.579 lift, a 236/248-degree duration split, and a 114-degree lsa. The cam was combined with a set of Crane hydraulic roller lifters and Comp hardened pushrods.

What do you get when you combine 7 liters of stroker with two turbos and one carburetor? The perfect 10.

The short-block was eventually buttoned up before the factory front cover and Speedmaster neutral damper were added. What the 427ci stroker short-block needed now was some airflow. Who better to talk to about airflow for our stroker than Airflow Research (AFR)? AFR supplied a set of CNC-ported 205 heads that flowed over 330 cfm. Loyal readers might recall that these heads were used on the Big Bang 351W test. The AFR heads featured a lightweight 2.08/1.60 stainless steel valve package, 70cc (CNC-ported) exhaust ports, and 58cc combustion chambers. AFR also offers a 72cc chamber volume, but we already had these heads and decide to make them work. Combined with the 29cc dish pistons, the static compression worked out to 10.3:1. The heads were fed by an Edelbrock Super Victor intake and a Holley 950 Ultra HP carb on the normally aspirated motor. We then switched over to a CSU-modified 850 Holley for the turbo motor. Run on the dyno with 1 3/4-inch Hooker headers and Lucas synthetic oil, the normally aspirated 427ci stroker produced 582 hp and 536 lb-ft of torque.

What Mustang owner wouldn’t love to have a 580hp stroker under the hood? But we were just getting started. After confirming the power output, off came the Hooker headers and 950 Ultra HP carb and on went the turbo manifolds and CSU carb. CX Racing supplied the twin-turbo kit, which we modified slightly to achieve our goal. The tubular manifolds were designed to feed T3 turbos, but we stepped this up to T4 76mm turbos using a set of custom T3-T4 adapters. Capable of supporting over 700 hp, the 76mm turbos from CX Racing were more than adequate for our power needs. Boost was fed through an air-to-air intercooler to the CSU carb bonnet. We modified the wastegate flanges to accept a pair of 45mm Hypergates from Turbo Smart (set for 7 psi). After dialing in the air/fuel ratio with jetting and adjustments to the boost-referenced power valves, we were eventually rewarded with 1,006 hp and 842 lb-ft of torque at 10.3 psi of boost.

Having reached our goal of 1,000 hp, we can officially say this 7.0L stroker with two turbos and one carb adds up to the perfect 10.

1. Getting things started was the Speedmaster, 4.125-inch bore, four-bolt block stuffed with a 4.0-inch, forged steel crank and rods.

2. Probe Industries supplied a set of forged (dished) pistons to help keep our static compression ratio to a realistic 10.3:1.

4. We relied on a set of Crane retrofit hydraulic roller lifters. Slightly clearancing the block was necessary to fit the link bar lifters.

5. Oiling is critical on a stroker motor, so we added a windage tray, a kick-out pan, and a pickup.

7. Looking to maximize airflow to the 7-liter stroker, we installed a set of CNC-ported AFR 205 Renegade heads. The intake ports of the Competition version flowed an amazing 331 cfm.

8. Ensuring plenty of rpm potential was a spring package designed for our hydraulic roller application that included titanium retainers.

9. In addition to the XFI cam, Comp Cams supplied a set of 1.6-ratio, Gold roller rockers, and hardened pushrods.

10. The normally aspirated 427ci was run first with a Holley 950 Ultra HP carburetor feeding the Edelbrock Super Victor intake before being subjected to boost.

12. Off came the Hooker headers and on went the turbo manifolds from CX Racing.

13. The turbo manifolds were used to feed a pair of 76mm turbos, also from CX Racing.

14. The twin turbo kit was originally designed to run the smaller T3 turbos, but these T3-T4 adapters allowed us to step up to the larger T4 76mm turbos.

16. Boost control for the twin turbo stroker was provided by a pair of 45mm Hypergate wastegates from Turbo Smart. The gates were initially set with 7-psi springs.

18. The twin turbos fed boost to a single air-to-air intercooler. Note the large fan used to keep airflow to the intercooler when testing.

21. Even without boost, the AFR-headed 427ci stroker offered impressive power. The trio of AFR heads, Comp XFI cam, and Edelbrock/Holley induction system combined with the sizable displacement to produce 582 hp and 536 lb-ft of torque. This got us more than halfway to our goal of 1,000 hp. Adding 10.3 psi to the mix from a pair of 76mm turbo pushed the power peak to 1,006 hp and 842 lb-ft of torque.