How to Fix Oil Drain-Back And Windage Problems 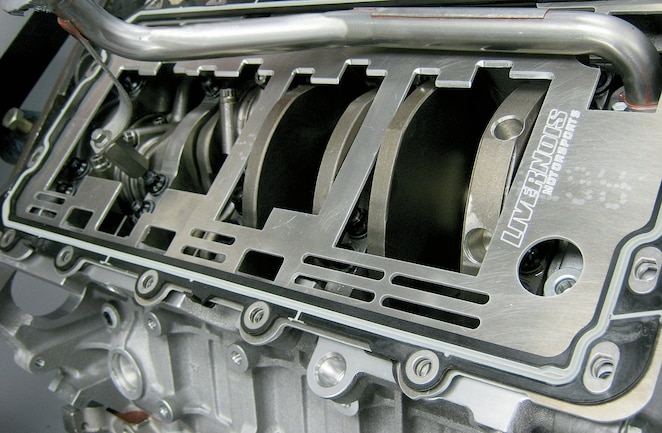 It's no secret that the modular line of Ford motors is nothing short of legendary. Sure, the first two-valve examples weren't well received, but in time enthusiasts grew to appreciate the "cammer" motors as FoMoCo continued to develop the platform. The big break came in 1996 when the 4.6L DOHC 32-valve mod motor landed between the rails of the SN95 Cobra. It rewrote the books. The aluminum block, high-flowing four-valve cylinder heads and 7,000-plus rpm capabilities more than made up for its small 281ci displacement. In lieu of stump-pulling torque and massive cubic inches, the little mod motors spun to the moon and, when paired with forced induction, gave their bigger pushrod brethren a run for their money.

But like everything in the industry, the gearheads inevitably pushed the envelope until even FoMoCo's finest failed. This isn't to say the factory Ford stuff is weak—it's beyond impressive considering modified examples make more than double the power of a stock motor and modular blocks have been proven above 1,000 hp. But let's face it. Ford fans are a crazy bunch, and we're going to push it until it breaks. Some call it real-world R&D, while others call it the price of being the best.

The Problem and the Fix

"Certain 4.6 modular applications that see high rpm can fall victim to oil control and windage issues because of the direction of the crank rotation and the imbalanced air control within the motor," said Mike Schropp, Engine Development Supervisor, Livernois Motorsports.

Schropp went on to explain the perplexing problem as to why many 4.6 motors collect oil inside the passenger-side valve cover. He said, "The four-valve oil drain-back system on the 4.6 motors is insufficient on modified engines because of the airflow in the crankcase simultaneously working against the drain-back holes on the cylinder heads that are spaced in such a way that the valve covers can fill with oil under high-G situations like braking or accelerating, ultimately causing oil to enter the PCV system or submerge the valve seats and slip past the guides into the combustion chamber, hurting emissions and performance. The oil that does make it back down the drain-backs tends to get pulled into the rotating assembly, roping around the crankshaft and components as they spin, causing parasitic drag and power loss."

The modular motors from Ford are a legend in their own right, and thanks to companies like Livernois Motorsports, we’re making this iron block 4.6 that much better with affordable oiling system upgrades. Here Drew Wallace from AED shows us how to perform the install.

But that's not all, Schropp also expanded on the imbalance of air control inside the lower-end of the motor. "The overworked OEM oil drain-back system is further hampered by the air movement in the crankcase created by the spinning crankshaft and components at high speed," said Schropp. "This causes the passenger side drain-backs to fight to return oil to the pan, while the driver side drain-backs have the return oil pulled directly into the crankshaft, causing parasitic drag and power loss."

The result is not only insufficient oil control in the bottom end but also a ton of oil collecting inside the passenger valve cover because the overworked stock drain-back holes can't keep up with the demands of the application. This is not to say the 4.6 modular motors are flawed; they're just an older design that needs to be tweaked when pumped up to make lots of power and turn high rpm.

The fix? Livernois Motorsports spent a lot of time studying the internal workings of the 4.6 modular motors and realized that if the oil were drained directly into the pan, not only would this help prevent windage problems but the extended tubes would also help balance the uncontrolled air inside the motor. And so, Livernois designed a high-quality oil drain-back kit for the iron- and aluminum-block mod motors that comes with everything needed to solve the oiling issues, including 6061 aluminum drain tubes and reducer bushings along with thread locker and high-quality taps, a smaller one for the Teksid blocks, and a larger unit for the iron examples. The kit uses extended tubes that drain the oil directly into the pan rather than on top of the rotating assembly—it installs with basic handtools and retails for a mere $149.99.

Beyond remedying the oil and air control problems so that 4.6 mod motors lives a long and happy life, Schropp said that on high-revving applications they've seen a 4-8hp bump due to the decreased parasitic drag—in other words, cut the amount of extra friction (read: oil) that the crank has to fight against and the horsepower increases. For those wanting to maximize their mod motor, pairing the oil drain-back tubes with a matching Livernois crank scraper that prevents oil roping and shears the excess oil away from the rotating assembly has resulted in 10-14hp increases at 8,000 rpm. I don't know about you, but those types of gains can only come from cutting a significant amount of friction.

While these mods are aimed at highly tuned 4.6 modular motors, this isn't to say that even street/strip examples won't benefit from the same modifications. Better air and oil control inside any motor is always a welcomed addition. Will these modifications prompt you to remove your motor and install them this weekend, we doubt it, but if you're building a new mod motor, consider these must-do mods cheap insurance no matter if you're doing an OEM rebuild or a big power build.

Follow along as AED shows us how to install this affordable mod motor oiling fix.

01. The Livernois Modular Engine Oil Drainback Kit comes with everything needed to make your 4.6 modular’s oil return system more efficient. This includes the 6061 aluminum drain tubes and reducer bushings, two taps (one for iron blocks and one for aluminum ones) and even a bottle of thread locker. Note that only the iron block tap is pictured here.

02. Here’s a closer look at the Livernois drain-back tubes and bushing spacer. They’re made from quality 6061-aluminum and are precisely sized to clear the block edges and maximize oil flow back to the pan.

03. Here’s another look at the oil drain-back tubes. There are three per side, and the shorter units are the forward-most examples.

04. The Livernois oil drain-back kit comes with two high-quality taps to simplify the modification process. Here’s a closer look at the tap designed for the iron block motors.

05. This is how the oil drain-back looks on a factory stock modular iron block. The oil simply falls from the ceiling back into the oil pan—but not before getting caught in the whirling crank and rods and being flung about, robbing horsepower. In fact, Livernois has seen a 4-8hp increase with the oil drain-back modification on high-revving mod motors.

06. Easy does it: Use plenty of cutting oil and equal doses of patience as you cut the new threads. You wouldn’t want to cut them crooked now, would you?

08. Next up, the drain-back tubes are threaded into the reducer washers after adding thread locker. Again, we don’t want these puppies coming loose in the heat of battle.

09. After all of the drain-back tubes have been mounted, it is time to bask in the fruits of your labor. Again, note that the shortest tubes are mounted toward the front of the engine.

10. Here’s a closer look at a Teksid aluminum block with the drain-back tubes mounted—these blocks don’t require the reducer bushings. You’ll still need to tap the holes, but thankfully Livernois included a smaller tap as well. Don’t forget the thread locker or you’ll be sorry.

For the ultimate in oil control, the Livernois oil drain-back tubes can be paired with a matching crankshaft scraper that helps to further cut down on oil windage and parasitic drag. In fact, when used with the oil drain-back tubes on a high-revving mod motor, Livernois has seen power gains of 10-14 hp at 8,000 rpm.

How does it work? Simple. The scraper mounts within 80 to 100 thousands of an inch from the rotating assembly to shear excess oil away from the components and direct it back toward the oil pan and sump. The less oil the crank has to fight through the better, as it cuts parasitic drag and increases power. The high-quality unit is made from 6061 aluminum, is designed to work with a 3.750-inch stroke, installs without modifications, mounts between two stock oil pan gaskets for a secure fit, and retails for an affordable $99.99.