Will our 289 fire and run after 11 years of hibernation? 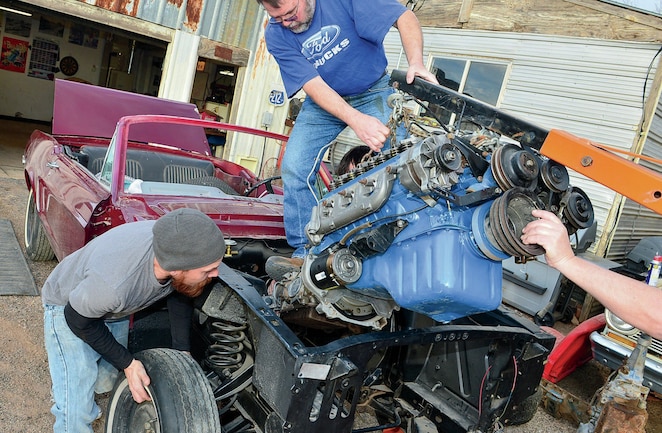 At the end of our first installment (Buying the Project Mustang, June '14 issue), Troy Anderson had hauled our Royal Maroon convertible—a shell plus parts—to his shop, Auto Stitch, in Amarillo, Texas. I was anxious to get this car up and running ASAP. Too many restorations consume two and three years, sometimes 10. This build would be a driver, but a very nice one. The project '68 included a 289 with C4 transmission, both found sleeping (under a tarp) on the garage floor. TJ said his father, the late Speck Winborne, had rebuilt the 289 and gone through the automatic. Speck had painted the engine bay, so we were ready to drop in the 289. However, after 11 years in hibernation would the vintage 289 small-block fire up and run? We hoped so, check out the photos to see for yourself.

Changing oil is SOP for engines sitting long term. Since our 289 turned freely, there was no need to remove the spark plugs and squirt oil into the cylinders and wait for days. Instead, Bob primed the 289 with oil; same as engine builders do with newly rebuilt engines. The technique is very easy to do in your home garage. Bob removed the distributor for access to the oil pump driveshaft. He inserted a homemade oil pump tool—basically, a hollow hex shaft off of an old distributor and mounted to the end of an electric drill. The drill spins the oil pump, which pushes oil up through the lifters and push rods to the rocker arms, as well as to the crank and rod bearings and other parts of the engine.

Since our '68 would be a driver, I chose "radial redline" tires from Coker. Had I been building more of a show car, I would have gone with a bias-play tire, also in Coker's inventory. The radial gives modern handling with a vintage look. Another plus is the sizing. Stock tires were 6.95-14. Coker's BFGoodrich Silvertown radial redline is a P205/70R14—a little wider tread than stock for a better grip of the road, but overall virtually the same height as the original to keep the speedometer reading dead-on. And while the dual redline tire was a specific option for early Mustangs, Coker also offers many other tire styles, including raised white letter, whitewall and blackwall tires in authentic brands, such as Firestone, U.S. Royal, and BFGoodrich. These BFG radial tires give a vintage look with a modern ride, just right to drive to a car show, which is my plan.

01. Using a cherry picker, Bob Becker lifted the engine/transmission off of the trailer with help from Troy’s dad, Tom.

02. Tom pushed while Troy steered our project ’68 Mustang into the shop.

03. Bob (left) and his father-in-law, David, sifted through buckets of supplied parts to find all of the engine brackets, mounts, and bolts to finish off the engine.

04. David installed the brackets for the motor mounts. These attach to the shock towers with bolts and accept the mount insulators for the engine to sit on. It is recommended to leave these bolts a bit loose to aid in engine/mount/bracket alignment as the engine is lowered.

05. Surprise number one: Under the passenger-side valve cover we discovered a missing pushrod on the number one cylinder.

06. Matt McNatt, Bob’s boss at Carter Engine & Machine in Amarillo, Texas, arrived to offer his expertise. He saw two good signs of a rebuild—grease under the bolt heads and a block that had been hot tanked.

07. Surprise number two: Bob tried to turn the engine over with a big wrench. He felt the crank bump up against something. Bob had already peered down the intake to spot clean metal, free of rust. So, what was the problem?

08. Bob and Matt traced the problem to a misalignment of the flexplate with the starter. Oddly, three spacer plates—instead of one—separated the bellhousing from the transmission.

09. We removed the starter and Matt pointed out a possible problem with the mounting surface of the starter.

11. Bob replaced the flexplate and starter with stock parts to function as the factory intended. Now, the engine turned freely and we all heaved a sigh of relief.

12. Dropping the 289 into the engine bay is a dramatic event that grabbed everybody’s attention.

13. Bob and Matt (left) bolted on the hood and front fenders to make the ’68 look more like a car.

15. Bob rebuilt and installed a stock Autolite two-barrel carburetor for the engine project.

16. Since we had not connected the fuel tank and lines yet, Bob rigged a fuel can for the mechanical fuel pump to pull gasoline from. We were anxious to see if the engine would start and run.

17. Surprise number three: The engine bay half of the engine gauge feed harness was just plain missing. Three wires are for the water temp and oil pressure gauge senders, and the coil. Bob rigged up a temporary wire (seen here) leading to the coil to transmit spark to the 289.

18. Bob turned the ignition key to “on” and using a test light verified we had power to the hot wire for the coil.

19. On the third spin of the starter the 289 fired and ran smoothly. Best of all it did not smoke or make any strange noises. Needless to say, everybody was elated.

20. Bob drove the car around the backyard and noted the C4 seemed to be working fine. The ’68 Mustang had no brakes, of course. Bob drove the convertible very slowly back into the shop. Now, Bob could start hooking up the power steering, brakes, and other mechanical parts under the hood. Troy could finish the trim work, including installing a new top. We’ll have to see what we will cover in part three, but stay tuned.