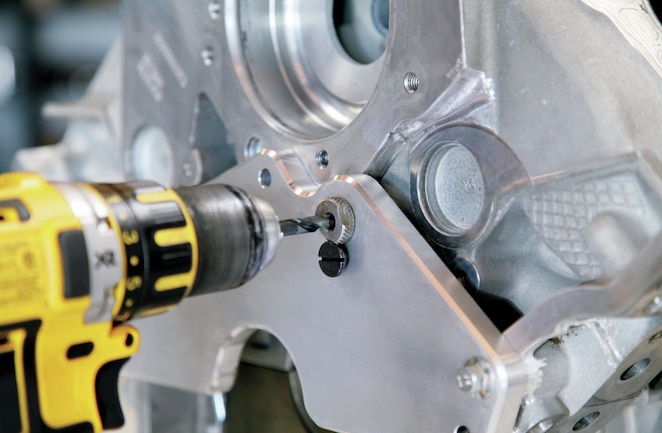 Over two decades after the first modular motor rolled off the assembly plant at FoMoCo, we're still discovering ways to improve "cammer" engines. Two-thousand eleven was a big year for the Blue Oval—it marked both the sunrise of the almighty Coyote and the sunset for the earlier modular motor. Bob Dylan said it best: The times they are a changing'.

But the fact that mod motors were produced for so many years, means quality examples and a solid aftermarket aren't going anywhere. As such, we thought it was time to pay a little attention to improving these legendary motors.

If you have a pumped up Four-Valve aluminum-block modular motor and haven’t upgraded your weak OEM cam-chain-guide pivot bolts, you’re going to want to read this.

"The high-performance community might not have received the mod motors with open arms when they were introduce in the SN-95, but in time we figured out what really made them work, despite the displacement constraints of their tight bore spacing," said Drew Wallace, co-owner of AED.

In lieu of big cubes, tuners soon discovered high rpm, big boost, and efficient combustion were the keys to a powerful mod motor—but these discoveries didn't come without their tragedies either.

"As with many speed parts, lots of the R&D comes from studying everything before it breaks. The rest comes from people breaking parts, dissecting the damage, and identifying the cause," said John Mihovetz, legendary mod motor guru and owner of Accufab Racing.

High rpm and big power don't come without sacrifices, and as many an aluminum-block Four-Valve 4.6 owner has discovered, pumped-up examples can cause their cam chain tensioner systems to quickly fail at the pivots.

"The iron-blocks use an 8mm hardened-steel dowel pin that is pressed into the block, but the aluminum blocks—both the earlier Teskid blocks (cast in Italy) and the later, lighter weight WAP (Windsor Aluminum Plant) blocks—have a smaller threaded 6mm pin that is much weaker," Wallace explained.

According to the experts, when these aluminum-block Four-Valve mod motors are juiced up with high compression and big cams, and are used with two-step rev limiters, they can wreck havoc on these guidepins. When they fail, you're either lucky or you're not. The lucky owners end up with additional valvetrain noise, but the unlucky ones can have the cams jump teeth, severely changing cam timing and grenading the entire motor with wicked piston-to-valve interference.

To really understand the problem, you have to get to the root, and that starts with its original design. "The passenger-side cam chain tensioner was designed backwards. It actually tensions on the wrong side of the chain; the intake cam compresses on the cam chain, reducing cam timing on that side by as much as 9 degrees," Mihovetz said.

Accufab racing has created a high-performance chain-and-tensior kit that improves strength by 50- percent and prevents the cams from moving quite as much. How? By tensioning the chain on the correct side.

Mihovetz also explained that while the tensioner is a known problem, it's one of the weakest links. It shows its face when paired with a mismatch of components or the engine is misused by the operator.

"Low-rpm, two-step rev-limiters are really hard on the car, say around 3,200 rpm, because the interruptions in ignition cuts are far greater than if you use a two-step over 5,000 rpm, where the cuts are less and there's far more mass inertia. The low-rpm stuff is really hard on the cam chain components," he said.

As Mihovetz explained, problems happen when enthusiasts build miss-matched combos. "You didn't see a lot of failures in the early days because manufacturers didn't make cams with lift over 0.475 inch. Now there are cams with 0.625 lift, and people are installing them without looking at the rest of the components," he said.

He said people are failing to realize that the 4.6 and 5.4 mod motors will not tolerate 0.625-inch-lift cams without coil bind, and too aggressive of a combination is often the cause for failure. Even on mild setups, Mihovetz said there can be a mismatch.

"Comp Cams makes really great products, and its cams call for a seat pressure of 100 pounds with an over-the-nose pressure of 275. This is a 40-percent increase over stock. If the timing gears, pivot pins, or any of the associated components haven't been upgraded, you're going to have problems—and that's with a mild cam, not something with 0.625-inch lift."

Balance, or lack thereof, is another aspect Mihovetz attributes to many of the failures. "The bigger the lobe, the bigger the imbalance, which requires more spring pressure to control. A stock cam can have 40 grams of imbalance, whereas a big aftermarket unit can have nearly 70 grams. This imbalance is sent directly through the chain and the associated components," he added.

For the pushrod folks in the room, you wouldn't upgrade your cam without stronger pushrods, would you? So why should the mod-motor folk throw in some big cams without taking the proper precautions? We'll save the details for another rainy day.

Mihovetz noted that the 5.4 mod motors have it worse yet due to the longer chains. However, because they don't spin as high as the 4.6s, they tend to stay together. Accufab sells billet chain guides to help save the 5.4s and 4.6s from catastrophic failure.

If you're in the early stages of building your aluminum-block mod motor, or already installed it and neglected this mod, listen up—this is something you're going to want to perform. Assuming that you're properly prepared if you're running big cams and high compression, you also should address the weak cam chain tensioner pivot with an upgrade from a company like AED, Accufab, or Cobra Engineering.

"We sell a kit with the guideplate necessary to drill out the factory holes, the appropriate drill bit, and the oversized 17-4 hardened stainless steel guidepins. You will also need the right tap," Wallace said.

These oversized pins allow aluminum Four-Valve mod motor folks to upgrade to the larger 8mm units found in their iron-block brethren, for added piece of mind and a more stable pivot point for the cam chain guide to anchor around.

Trust us—if you're building an aluminum mod motor, do not forget this "mod." In fact, we consider it cheap insurance. Even if you already installed your motor, pull it next winter and perform this mod—you won't be sorry. After all, how much is a new motor?

Follow along as we show you how to install this cheap and easy mod motor valvetrain upgrade.

The Accufab Racing heavy-duty chain on the left is much stronger than the OEM FoMoCo unit, so it can withstand the rigors of high-rpm track abuse.

For those that want to take their 4.6 and 5.4 mod motors to another level, John Mihovetz at Accufab Racing has designed a complete timing chain tensioner and chain replacement that's ready for anything you can throw at it, no matter the rpm or the power level. The tensioners are made from quality billet-aluminum, and unlike the factory pieces, the Accufab unit tensions from the correct side of the chain for fewer cam-timing changes and more power. The heavy-duty secondary chains also offer 50-percent more tensile strength than the stock units. If building the ultimate mod motor is your only priority, the high-performance cam-chain tensioner and chain kit from Accufab is the way to fly.

The billet cam-chain tensioner from Accufab Racing on the right is stronger than the factory unit, and actually tensions on the correct side of the chain. This stabilizes cam timing, unlike the factory setup, which is known to retard cam timing.

01. For those who don’t want the drill plate, AED also sells the upgraded pivot bolts separately. Here’s a closer look at their flawless construction.

02. Look at the stock pivot bolt compared to the larger 8mm AED unit that’s made from burly 17-4 stainless steel.

03. Look at one of the wimpy stock 6mm cam-chain pivot bolts that come on the aluminum 4.6 modular blocks. Both the earlier Teskid (cast in Italy) and the later Windsor Aluminum Plant (WAP) blocks come with these weak links. Thankfully we’ve got just the fix.

04. The cast-iron modular blocks not only have bigger 8mm pivots, but they’re also pressed in, unlike the smaller threaded units on the aluminum blocks.

05. Here’s how the drill plate mounts to the front of the block. This task is best done with the motor out of the car, but if you’re clever enough, you could likely do it with the motor in place.

06. Don’t forget to tighten the drill-plate bolts since any movement during the drilling process could be detrimental.

08. The drill plate makes it easy to accurately drill the holes. Here Drew hand-models for us.

09. Here’s a closer look at the drill plate and guides.

10. We also measured the passenger-side hole for the appropriate depth and it spec’d out at roughly one and a half inches.

11. Here Drew carefully drills out the passenger side.

12. Be careful when you’re cutting the new threads. Cutting oil can help expedite the process and prevent galling.

13. Here’s a look at both of the AED 8mm cam-chain-tensioner-guide pivots installed.

14. Here’s a closer look at the pins. They’re high quality and look like they came from FoMoCo.

15. There you have it—an aluminum-block mod motor with beefed-up guidepins that’s ready for high rpm and big boost.