How to Install the CXRacing Twin Turbo - Wild Deuces 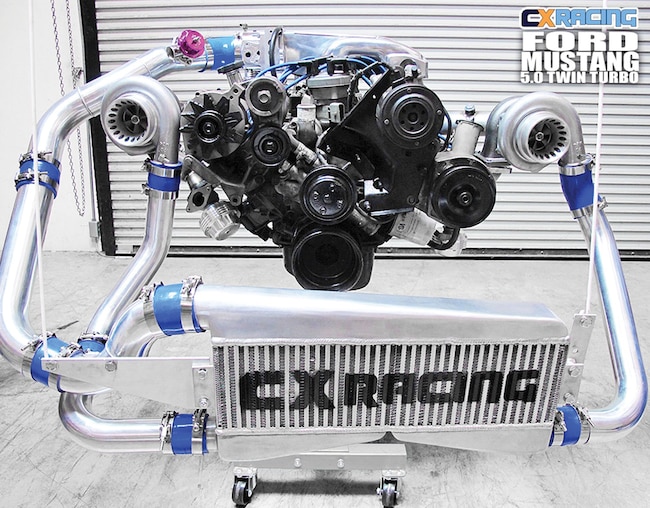 Horse Sense: Most discussions about turbochargers indubitably include some reference to a turbo's size— in millimeters. For those who have always wondered exactly what area of the turbocharger this metric measurement refers to, it's actually the inducer diameter of the unit's compressor wheel. That's the diameter of the point where air actually enters the wheel.

This question is for all of our die-hard Fox fans. How many of you occasionally find yourselves mulling over the idea of parting ways with your beloved '86-'93 GT or LX, simply because the lure of newer models is so strong?

Let's be real about this. While there are all sorts of upgrades that help make them more comfortable as they go on in years, the early cars will never match the tightness and plushness of later Ponies. And, with the Coyote, Roadrunner, and Trinity engines nestled under the hoods of the coveted '11-'14 'Stangs, the choice between keeping your 20-something-year-old friend or opting for a younger thoroughbred can be a bit intimidating.

However, despite the performance-and-aesthetic plusses of the newer rides, at the end of the day, cost is often the critical factor in electing to either step up or stay put. The latest Mustangs deservedly garner a pretty handsome sum. When you factor in the tab for modifying a later-model Pony, you're looking at potentially handing over a lot of bread.

Of course, such investments certainly are worth it in most cases. But, when your budget won't support making such moves, there still are a lot of cool options for making a Fox worth keeping. One option that hit our radar is a twin-turbocharger setup from CXRacing. This SoCal-based company recently starting making moves in the Mustang game after many years of forced-air-inducting sport compacts and intercooling anything on wheels that's fitted with forced induction.

Of course, the concept of adding a pair of turbos to a pushrod-5.0 'Stang's engine is nothing new. However, until now, we haven't seen a complete intercooled turbo system for as low a price as the kit we're working with in this report.

When considering turbos, the bigger-is-better adage doesn't completely apply for the street 5.0s. Even with 331ci and 347ci engines that can support huge 88mm, 94mm, or 101mm turbochargers, bolting those behemoths on daily driven Mustangs doesn't accomplish much. The amount of time it takes for sufficient exhaust pressure to build up in bigger turbos results in turbo lag. Subsequently, boost, rear-wheel horsepower, and torque don't truly come into play until you're going well over any legal speed limit, making the big-single setup much more appealing for 'Stangs that are purpose-built for quarter-mile action.

While a matched pair of smaller turbos (65mm to 76mm) may not produce as much boost as their giant single counterparts, they might sacrifice some top-end power, but they definitely will spool much quicker and still can provide the engine with a sufficient amount of air. This actually makes going with two small hair dryers a much-better option for a street-centered '86-'93 'Stang that no doubt would be a lot of fun to drive when boost and peaking well before 6,000 rpm.

Before your Melvin instincts get the best of you, no, the turbo set isn't designed for carbureted 'Stangs. Despite its pre-EFI build date, Greg's sleeper is retrofitted with a 306ci short-block and a complete replica '93 Cobra EFI setup (mass-air, GT-40 heads, Cobra intake, and so on), a big reason why we selected the Pony for this upgrade. The new-tech-for-old-'Stang concept is taken another step further with the removal of the coupe's engine-management and replacement of the EEC-IV hardware with Holley's Dominator EFI system.

Keep reading to see the install performed by CXRacing's Ascension Sanchez and Rene Franco, and learn the details on tuning the turbocharged 306 using Dominator EFI (and the all-important dyno results, of course), all of which can revitalize an old Fox with cool technology for modest cost.

Nothing beats doubling a Fox ‘Stang's 200 baseline horsepower, especially with a power-adder that looks as sexy as CXRacing's twin-turbo package!

Greg Montoya's EFI'd '84 coupe came to us with a fairly fresh 306 that put out 215 horses in its baseline evaluation on the chassis dyno. After installing CX's twin turbos, peak power climbed to more than 402 horsepower, with just as much torque (in lb-ft) at the rear wheels, with boost limited to only 8 psi.

"This combination can definitely make 30-40 more horsepower with a lock-up torque converter and bigger fuel injectors," said Addiction Motorsports tuner Eddie Rios. "We would see even more if the kit was installed on a Mustang with a manual transmission. So much more, we would have to consider where to limit power because the engine is based on a stock block. I like the way this turbo system is made, its price is perfect, and it definitely makes good boost."

We agree with Eddie's sentiments, especially when the overall price is taken into account. The total for a CXRacing twin-turbo kit and Holley's Dominator EFI is roughly the same price as many other Fox turbo systems—single or twins—by themselves. However, we must note, using Dominator actually is a bit of overkill—Holley's HP EFI is a perfect alternative to the big ECU, as it has many of the same features and capabilities [datalogger, boost controller], yet is priced approximately $750 cheaper because it does not control electronic transmissions and only has one wideband O2 input.

Our friend Eddie Rios of Addiction Motorsports is well-versed in tuning blown and turbocharged Mustangs with stand-alone engine-management systems. In a short time, Eddie has become quite proficient with Holley’s new Dominator EFI. After strapping Greg’s ’84 coupe on the Dynojet chassis dyno, Eddie took a moment to survey CXRacing’s twin-turbo layout.
Greg installed the Dominator ECU (PN 554-114; $1,744), as well as its associated harnesses (main power, universal main MPFI, V-8 injector and Ford TFI ignition), sensors, and such right in his driveway. Using the system’s pre-programmed calibration for a 5.0/turbo combination as a baseline, Greg had the engine fired and running well enough for moderate-throttle and light-boost drives around his neighborhood shortly after wiring the ECU, programming target air/fuel parameters, and allowing Dominator’s self-learning function to do its thing.
Fine-tuning the 306 involved Eddie shutting off the self-learn function, transferring its calibration data to the main fuel table, and then modifying fuel settings in stages, to eventually achieve a safe air/fuel ratio at WOT. The program’s base timing advance is 20 degrees, which actually proved to be a bit too much for our setup. By taking 4 degrees of timing out of the low range and 2 at the top of the rpm window, Eddie was able to achieve air/fuel ratios of 13.5 at idle, 12.0 at 2 psi, and the desired 11.5-11.7 from 4-to-8 psi of boost.
“The Dominator EFI’s self-learning actually does a great job,” Eddie says. “I really like the system’s 3D function, which allows fuel-table changes to be made directly from the grid and on the fly. I didn’t really have to do a lot of building off of the baseline for the WOT tune, but the system is really intuitive and does cover every area associated with tuning a boosted application and making it run well.”
With engine temps anticipated to be higher than normal with the turbos, Greg added a Flex-a-lite 180 Black Magic Xtreme Series electric fan that blows at a rate of 3,300 cfm.
The fan proved to be a perfect upgrade, as the Pony’s coolant remained at a steady 190 degrees throughout the dyno session.
And here is the fully completed turbo project, with the EFI system’s harnesses and sensors installed, and completed with Kevlar covers for the turbochargers’ turbine housings and K&N filters to protect the compressor wheels.
We really like the stealthiness of this setup, which only emits a low murmur when the engine is at idle or low, street-cruising rpm.
The fuel-injector dilemma answered our question as to why we did not see more power from, and a higher rpm plateau for the twin-turbocharged engine. A fix is in the works; exchanging the 42-pounders for 60-lb/hr squirters, which we’re sure will then make being mindful of the stock block a bigger concern.
You can’t beat a dyno graph that looks like this, with rear-wheel horsepower and torque practically mirroring each other throughout the entire run. We attribute the breakup at the top of the run to two things—the coupe’s loose, non-lock-up torque converter, and also the fact that the engine is equipped with only 42-lb/hr fuel injectors. While we don’t have the graph, the 400 horsepower and 403 lb-ft of torque are considerably more than the engine pumped out in its naturally aspirated form (215.6 hp at 5,500/227.9 lb-ft at 4,300).

Take a look at this Readers' Album for April 2014. A duo of Mustangs, a 1966 Ford Mustang Hardtop and just a few more 'Stangs to catch your eye.

Check out Mark and Jackie Cuomo's coyote swapped 1984 Ford Mustang T-top coupe! Both of them fell in love with the T-top, and Mark wanted to build his wife a reliable Fox. It's a swap that's taken over like wild fire, and Ford enthusiasts have taken to it like Camaro owners to mullets.

The AmericanMuscle car show never disappoints. Set in the rolling hills of the countryside near Malvern, Pennsylvania, the show provides Ford and Mustang enthusiasts with a chance to see over 1,000 Mustangs in one day, but also to meet industry icons and find some great deals on parts for your fast Ford.