Admittedly, many 5.0 Mustang & Super Fords readers rate emissions compliance up there with flossing every night. It's the right thing to do, but no one really seems to care if you don't.

We can assure you that while our California readers don't floss any more than anyone else, they do stick much closer to emissions compliance. While we'd like to think the oppressive brown pall hanging over the Los Angeles basin has jump-started Californios civic sense, in reality it's the specter of governmental coercion that has turned opinion from evasion to compliance with the smog laws. Having to chassis dyno your Mustang for the state with a sniffer up its tailpipe every other year is a great motivator, after all.

Frankly, most longtime residents of the Golden State are, in the final reckoning, happy enough to have emissions testing. It's a pain, it's expensive, it's a definite crimp on automotive enthusiasm, but being able to breathe and seeing trees with leaves on them is nice too.

And it can also be good for business. Mark O'Neil, the big piston at Coast High Performance, has long offered a CARB-exempted 347 Street Fighter 347-E short-block for those wanting to do things the right way. Unremarkable from other 347s in most respects, the 347-E's big emissions' stick is its camshaft--it's key to making the -E engine both powerful and emissions legal.

Horse Sense: Combine California's strict emissions testing on newer carsand its benign, nearly rust-free climate, and you end up with a healthypopulation of nearly 40-year-old hot rods. In the Golden State,deep-breathing '60s Mustangs are not uncommon, and old Foxes never die.

As with all EFI camshafts, the Pro Mustang 4018 hydraulic roller Coast uses employs a 112-lobe separation angle to ensure adequate manifold vacuum. That's also a sign that driveability ought to be reasonable, and it is. The valve lift is 0.510/0.534 inch, while duration is a reasonable 222/232 degrees at 0.050 inch valve lift. Such specifications may not raise a drag racer's pulse, but they are definitely healthy for something you want to drive onto the emission inspector's dyno. We've made 425 hp with less cam and Z304 cylinder heads on our 347 Street Fighter dyno mule, so this bumpstick is clearly way out in front of an E303. And if you want just the cam, Pro Mustang has it for $189.99.

The pistons are also important to the 347-E meeting its emission goals. Coast uses its in-house Probe pistons--naturally--this time with a slight dish for compression compliance and a smooth flame front. 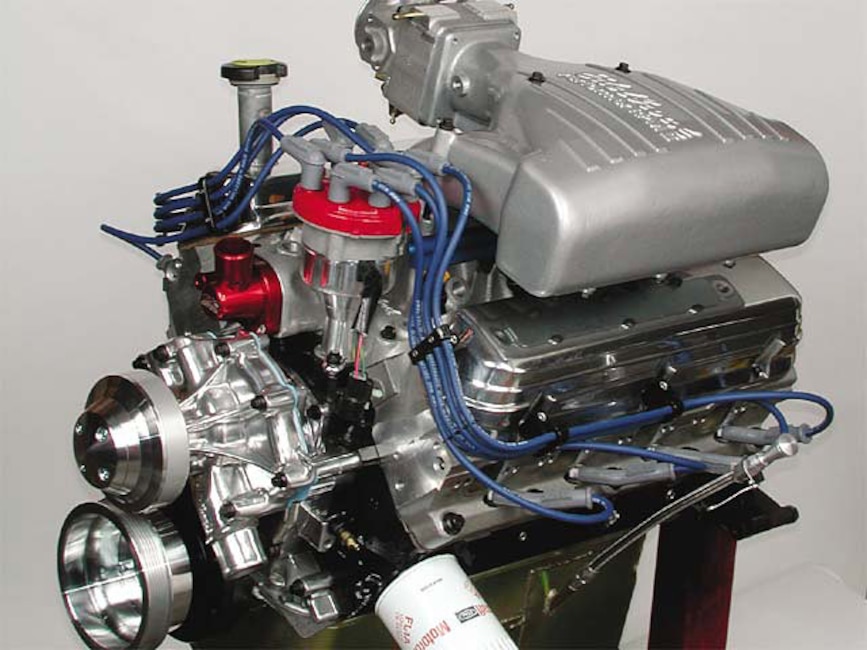 There's no law against dressing up emissions-legal engines, and CoastHigh Performance didn't spare the eye-candy when dolling up its project347-E. With a guesstimated 400 hp (we hope to have dyno numbers later),it's definitely a good-looking engine. The polishing is a $799.99 optionfrom Coast when applied to the heads, intake, water pump, andalternator. 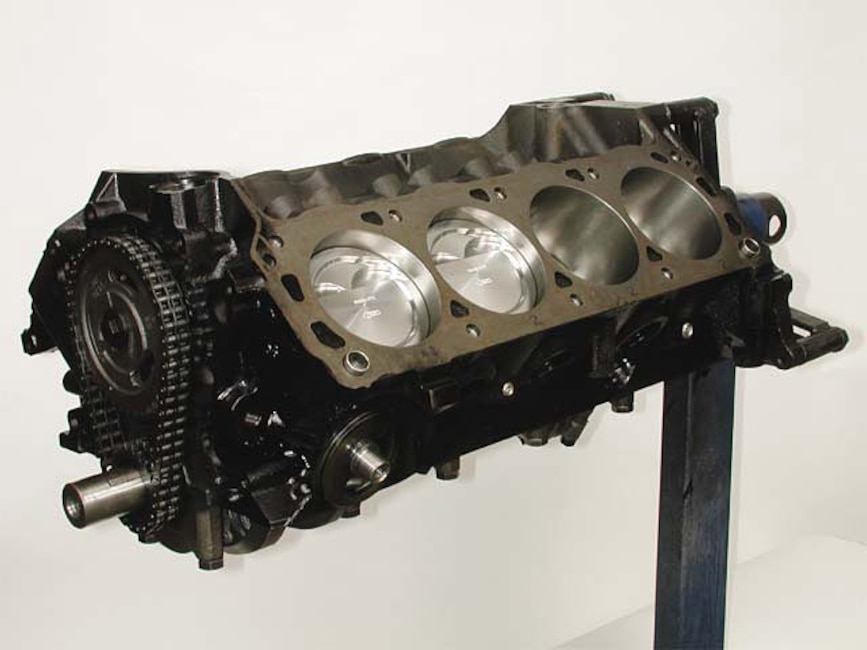 At the heart of the CARB-exempted engine package is this Coast HighPerformance 347-E Street Fighter short-block. While looking a bit barecompared to the complete engine, the 347-E retails for $2,899, whichallows financial wiggle room for a front cover, a harmonic damper, andso on. Coast can supply all such parts if a single bill and reducedshopping time are desirable. 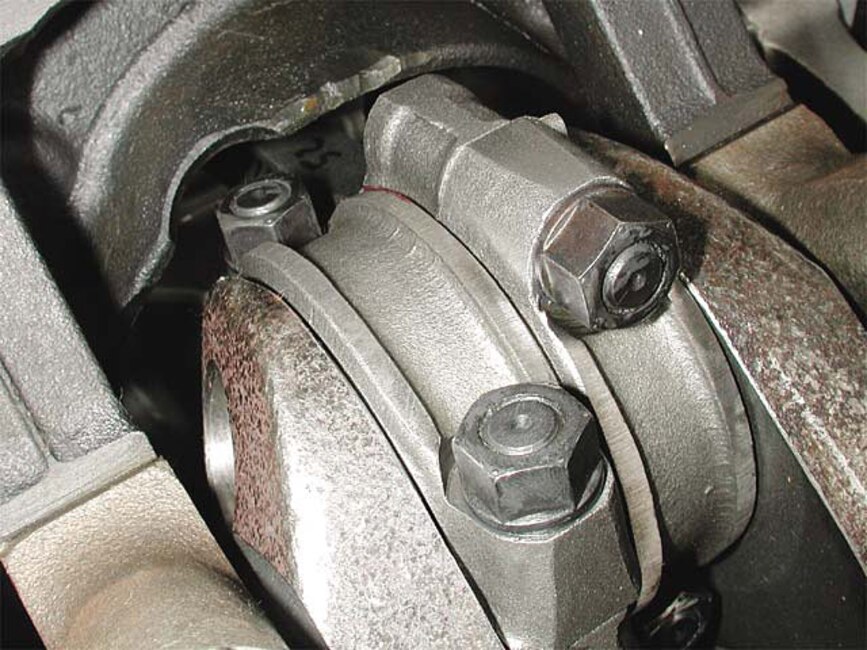 Coast uses all-new parts in its short-blocks and engines, includingstock replacement blocks in the 347-E. The minute clearancing requiredfor the 347 stroke at the bottom on the cylinder bores and around theoil-pump boss are done on CNC machines, along with the rest of the blockmachining steps. 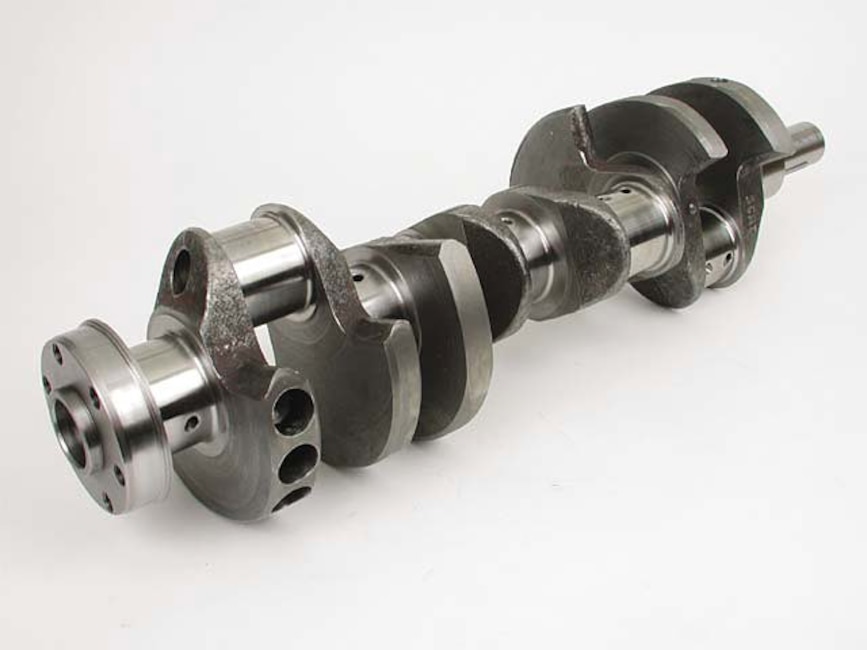 These days, maximum displacement in a small-block is as easy as reachingfor a 3.400-inch stroker crank. Coast uses a variety of these--this oneis from SCAT and will easily support 500 hp.

Otherwise, the 347-E swings the same cast-steel crankshaft and forged connecting rods in a factory new block as other Coast High Performance 347s. This gives the 347-E the same durability and muscle as Coast's other stroker-replacement short-blocks.

Of course, a short-block is just that--it's not a complete engine. What we're detailing here is Mark's idea of how a 347-E could be dressed with emissions-legal cylinder heads and induction to produce a completely emissions-legal engine. Think of it as a pile of CARB Exemption Orders stacked atop each other. Specifically, Mark is using a set of World Products Windsor Jr. castings he had on hand to top his short-block. Wanting to build as powerful an emissions-legal engine as is reasonably possible, any of the higher-achieving street-legal cylinder heads (Edelbrock Performer RPM, AFR 185s, and so on) would have worked. The World Products castings are certainly capable of supporting all the power the E-legal camshaft can dish out.

In an interesting twist, this engine will also wear the new Edelbrock Performer RPM II intake manifold (see "Biting Back," May '03, p. 52). Again, this top-end happy EFI intake ought to support all the power the cam can make.

The other point is cost. While engine building is never inexpensive, today's replacement short-blocks, with their high offshore parts content and bene- fiting from many automated machining steps, offer impressive power and durability for their price. Mark was aiming roughly in the $6,000 ballpark for this engine in its completed state (the 347-E short-block is $2,899.99, leaving $3,100.01 for the rest), and it is an entirely obtainable goal. Installing such an engine in an older Fox Mustang, and applying some wheels, tires, and sup-porting exhaust and replacement parts such as engine mounts, could get a guy into definitely entertaining V-8 power on a budget and timeline. It might require you getting a second job or other effort, but it is actually obtainable. That's a sight better than pining away for an '03 Cobra with a killer stereo that never materializes.

This month we're showing what goes into the 347-E, and how Mark dressed his example. In a future issue, we'll show you the finished car (we'll warn you now that Mark spent considerably more than moonlighting money on making the paint and other cosmetics magazine- presentable) and how the power and emission outputs turned out. Stay tuned.

Coast has crankshafts in either 28- or 50-ounce balances. That allowsthem to match varying parts availability, early and late Mustangdampers, and the resulting three- or four-bolt patterns for the pulleys.Drilled like Texas oil country, the project engine's crank is a 50-ounceunit.

Coast's -E engines use the company's CNC beam-forged steel connectingrods. They measure 5.315 inches center-to- center and use athrough-style rod bolt. This helps hold down the cost compared tounnecessarily stronger H-beam rods. These rods have a slightly offsetpin bore to maintain rod angularity too.

Coast High Performance's associated parts manufacturing business isProbe, and Probe's major work is pistons. Sophisticated CNC-machiningcenters are key to all this. They allow light, strong, tight-fitting,quiet slugs in any size or dome shape. The 347-E is built around this14.2cc dish design. Combined with the Windsor Jr. heads on the projectengine, this dome delivered exactly 9.5:1 compression. This isdefinitely pump-gas compatible.