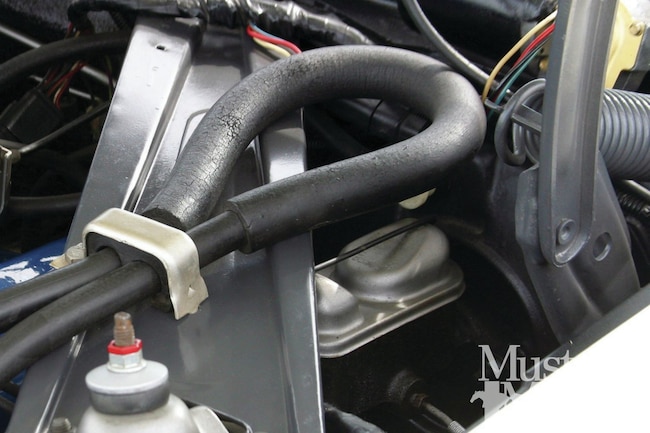 Almost all vehicles manufactured before 1967 had braking systems with a single reservoir master cylinder, including ’64½-’66 Mustangs. This created a safety concern because if you lost brake fluid at one wheel and the master cylinder drained, you would lose braking capability on all four brakes. As a response to this general safety issue, for the ’67 model year, all U.S. auto manufacturers, including Ford, were mandated by the National Highway and Transportation Safety Administration (NHTSA) to supply braking systems that included a dual reservoir master cylinder. This split the braking system equally between the front and rear (or in some vehicles diagonally), so that if you lost pressure or fluid in one section you would not lose control of all brakes. This dual reservoir system was the same regardless if the car was equipped with four wheel drum brakes or a disc/drum configuration. In a disc/drum setup, the reservoir for the disc brake portion was larger, for more fluid, since the calipers hold more fluid than a wheel cylinder.

This decal, with a Ford part number for the brake fluid, was utilized in early ’67.

Brake fluid is a type of hydraulic fluid, which means it is used to transfer force into pressure and to amplify braking force. In other words, it moves the components in your braking system. The main difference in different rated brake fluids is the boiling point. This is the most critical specification because brake fluid is subjected to very high temperatures, especially in the brake calipers. It must have a high boiling point to avoid vaporizing in the lines.

In the 1960s, the primary organization that established a uniform quality standard for brake fluid was the Society of Automotive Engineers (SAE). They released a standard called SAE 70R3 that was referenced by Bendix/Ford/Mopar in the mid 1960s. Around 1969, the updated standard SAE J1703 became widely used. The reference to these specs can be seen debossed (gives the appearance of stamped or sunken letters) on most master cylinder caps during that time.

In 1966, Ford decided to start referencing its own brake fluid part number (C6AZ-19542-A) on master cylinder caps due to concern about the higher temperatures created by front disc brakes. Sometime in 1967, Ford started putting a sticker over the master cylinder caps that called for their own Ford brake fluid specification (ESA-M6C25-A). This continued until early in the ’69 production year when Ford switched to a master cylinder cap that had the ESA specification embossed (gives the appearance of raised letters) in the cap, eliminating the need for a sticker.

Finally, as Department of Transportation (DOT) specifications became universally accepted and used in the 1970s, Ford adopted the DOT 3 specific mention of brake fluid on their master cylinder caps.

For early ’69 production through late ’72 production, the zinc-finish C9AZ-2162-A cap was introduced with the ESA specification embossed, eliminating the need for a decal. There were two versions: one with a pair of breather vents in the cap lip and another, possibly from very late ’71 production, with a single breather vent.

The last generation cap, D3ZZ-2162-A with a zinc finish, was used for ’73 and was later sold as a service part into the 1990s. The breather vent, previously located on the lip, moved to the top, likely as a fix to prevent brake fluid from leaking out the sides. Early versions of this cap have the ESA specification embossed on the top, but it was eventually replaced with DOT 3 brake fluid information. The later DOT3 cap has debossed lettering. Because the drum brake Mustang used master cylinders with a pair of equal size reservoirs, they utilized a completely different cap, C7AZ-2162-A, was used by all Ford drum brake cars from ’67 to ’73, not just Mustangs. The cap was stamped with SAE 70R3 on early cars and SAE J1703 on later cars and had two breather vents on the lip of the cap. These drum brake master cylinder caps never referred to Ford specific brake fluid or Ford specifications.