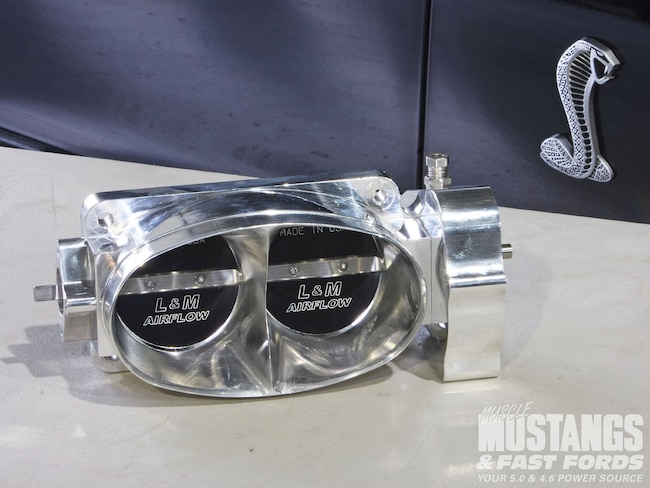 In 2005, Ford released an entirely new Mustang from its chassis to the drivetrain, and its popularity is amazing. Under the hood, most people focus on the improved modular motor with its three-valves-per-cylinder and variable camshaft timing. As you move to the Shelby GT500, the attention turns to its supercharged 5.4L and four valves per cylinder.

The combination of those powerful engines with the stellar retro-looks provided a combination that has been a huge success for Ford Motor Company. Once you get past the hype of the new engine configurations, you notice a system that is a huge departure from the norm-the drive-by-wire throttle body.

Another benefit of the new throttle body is a healthy sized dual-bore inlet. The Three-Valve mod motor throttle body has two 55mm bores, while the Shelby GT500 comes with a twin-60mm setup. Both are far more generous than the old-school 5.0L pushrod engine, which used an anemic single-bore 55 or 60mm throttle body.

The large twin-bore throttle body on Three-Valves has proven to be quite reliable and sufficient in naturally aspirated, centrifugal supercharged, and turbocharged applications. We have seen little gains in those combinations by adding a larger throttle body, but that story changes when moving to Roots- and twin-screw-style superchargers. It's been proven time and time again that an increase in throttle body size can make a major difference in power with positive-displacement-style superchargers. According to longtime Mustang expert, legendary Pro 5.0 racer, and owner of L&M Airflow Systems Jim LaRocca, "The less pressure drop you can put in front of the blower, the more power you can gain."

As the popularity of Roots- and twin-screw superchargers increased, so has the need for bigger throttle bodies. It's not uncommon to see single-bore units that are well in excess of 120 mm and upwards of 160 mm. Those sizes certainly offer very little restriction on today's massive twin-screw blowers, but there are some drawbacks to the single-bore units and other aftermarket throttle bodies. 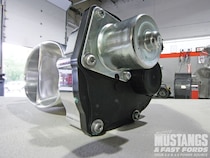 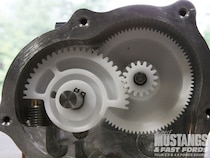 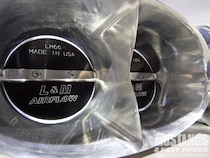 Due to the drive-by-wire technology, swapping a throttle body usually requires re-tuning the ECU. Tuning is necessary to calibrate the driver/computer demands to the amount of airflow needed or required by a throttle body that is different from stock. For example, if the computer doesn't know a larger-than-stock TB is installed, it will simply open the TB based on the driver's throttle position. In reality, the throttle body will now be flowing more air, and greater acceleration than is desired can occur.

Of course, re-tuning adds more cost and increases the time needed to modify your Mustang. However, L&M Airflow Systems, a new company formed by Jim LaRocca and Herman Minkin, has released a new line of dual-bore throttle bodies that require no additional tuning, and each offers significant airflow for better performance. "We didn't originally design the throttle body to start selling it-my partner, Herman Minkin, and I made a couple for ourselves," said LaRocca. This "fun" project turned into L&M Airflow Systems. "People started asking if we could make these new throttle bodies available to those that need a high-flow throttle body without the additional cost of a tune. It was then that we decided to go into the business of manufacturing them."

If you're scratching your head and wondering why swapping a throttle body requires retuning, the answer is simple. Since the computer controls the electric motor, it's calibrated for the stock throttle body blades, gears, airflow over the blades (open and closed), and airflow through the bores. It knows how much force to exert on the throttle blade to achieve a certain pitch. All those variables are changed when swapping to a new throttle body.

Larger throttle bodies allow greater airflow through the bores, as well as at idle, and even the gear characteristics are different (weight/material, lubrication, mesh, and smoothness) of different throttle bodies. The throttle body motor control can be corrected in the ECU tune, but it requires you take your car to the local chassis dyno and pay to have the re-flash. The L&M throttle bodies don't require the re-tune since they address those points of throttle blade movement, and most importantly, airflow.

LaRocca was the horsepower and tuning expert in the design phase, while Minkin brought his 35 years of aerospace experience to the table. They also brought in an engineer, Mike Long of G-Force Racing Transmissions/Long Machine and Tool, to streamline the manufacturing side of the equation.

Laminar airflow and velocity is critical in the aerospace industry, and the L&M team applied some simple techniques to create smooth, non-turbulent flow. To achieve the proper airflow, a vortex generator, more commonly known as a splitter, is added. "The vortex generator excites the air," said Minkin. "It's used on some airplanes to straighten and speed up the airflow forward of the control surfaces (ailerons, elevators, and rudder). We've performed airflow testing of the single-blade throttle bodies and found they experience dead airflow in the middle of the opening off idle, and then around 2,500 rpm. The airflow suddenly picks up speed and causes an rpm surge, which accounts for the off and on feeling that so many experience with this type of throttle body, as well as other driveability problems."

The airflow is also enhanced as it goes over the throttle blades due to the front of the L&M blade being chamfered. This technique was derived from airflow going into a jet engine. "It's about enhancing airflow and reducing/removing turbulence," Minkin explained. That was the first step in correcting the problems associated with using the factory throttle body motor controls with an aftermarket throttle body. The next was precision-cut Delrin plastic gears, similar to the factory gears, allowing a smooth control of the throttle blades that reduces the effort on the motor.

We tested two different sized L&M throttle bodies on a modified Shelby GT500-the twin-bore 66mm (LM66) and the twin-bore 72mm unit (LM72). Our test car appeared a few issues ago when Downs Ford Motorsport's technicians installed a Ford Racing 2.9L supercharger on Shay Varrone's '10 Shelby GT500. Out of the box, the blower helped bring output to a stout 675 rwhp with the Ford Racing tune, which left some power on the table due to its safe nature.

The car was tested on a DynoJet chassis dyno at Big Daddy Performance (Lakewood, New Jersey). Since that article, Varrone had Downs add American Racing Headers long-tube headers and H-pipe (with catalytic converters), larger injectors, and a custom SCT tune from Big Daddy Performance. In this trim, the GT500 blistered the chassis dyno with a stout 703 hp and 659 lb-ft torque at the wheels, which is our new baseline.

The car was equipped with a FRPP Cobra Jet twin-bore 65mm throttle body, which comes standard in the 2.9L twin-screw blower kit. Mike Rozman of Big Daddy Performance did a few back-up runs to ensure our baseline of 703 rwhp was consistent and within 2 rwhp each time.

The LM66 was bolted on and it laid down 726 rwhp and 671 rwtq, gains of 23 hp and 12 lb-ft. of torque. We also tested the LM72. According to LaRocca, it's for the guy who wants "a no-compromise throttle body as it flows more airflow than anything else on the market," stated LaRocca. The LM72 swelled output to 729 rwhp and 669 rwtq, but there is more to the story than those numbers.

The chassis dyno pulls were done on a hot and humid June day. Big Daddy Performance utilizes huge fans that blow on the engine and through the grill, but time was working against us for the LM72 runs. We let the car sit, but didn't use any ice in the cool-down process.

While the heat soak certainly hurt power, the amount gained with the L&M 72 managed to raise the horsepower and torque levels to a point past the Ford parameters, which caused the Mustang to throw a code. "Although the L&M throttle body by itself doesn't require any tuning changes," said Minkin, "the additional horsepower and torque might take the engine components or tune torque limit past their respective parameters, as was the situation in this case. A word of caution-you must be careful to know the power limits of all the components in your particular combination." But we are happy to report that both throttle bodies picked up power over the Cobra Jet throttle body, and driveability was smooth with a nice reaction to pedal movement and part-throttle cruising.

Those who are switching from an aftermarket throttle body to an L&M unit are required to have the ECU throttle controls returned to stock. All L&M twin-bore throttle bodies require the factory settings since it's designed as a no-tune stock replacement (with the exception of the torque limit in the tune, which must be modified for those wishing to exceed the factory rating). According to LaRocca, the LM66 will pick up anywhere from 30 to 50 rwhp on TVS-equipped GT500s, depending on the boost level. Cars with lower boost pick up in the 30-rwhp range, while higher boost combinations are closer to 50 rwhp.

A twin-bore 78mm (LM78) is also in the catalog and is designed specifically for Kenne Bell 2.8H and 3.6L superchargers. For those who still wish to add a single-blade throttle body, L&M will have released two single-bore units, the Super Single (147mm x 66mm) and the Ultimate Super Single (152mm x 72mm), by the time you read this.

Technology might be advancing, but the same basic principle of getting air into an engine remains consistent. The L&M throttle bodies offer high-flow, which translates into more power and no tune required.