How To Rebuild A Top Loader Four-Speed

Ford's Top Loader four-speed transmission got its reputation for solid reliability from time-proven performance under some of the most grueling conditions imaginable. Born in Detroit and groomed in racing venues worldwide, the Top Loader continues to witness widespread use 45 years after its introduction with virtually no end in sight. NASCAR racers like the Top Loader for its rugged demeanor. When you combine the Top Loader with Ford's indestructible 9-inch removable carrier rearend, it's an unbeatable driveline in anyone's league. Our focus here is the Top Loader and how you can make it better.

Ford debuted the Top Loader four-speed in 1964 as a replacement for the Borg-Warner T-10. The Top Loader was designed by Ford as a fully synchronized four-speed conceived to stand up to just about anything racers could throw at it. It didn't become a Mustang mainstay until the latter part of 1965 behind the 289 High Performance V-8. The T-10 was phased out during 1966.

Ford's Top Loader four-speed transmission gets its name from its "top-loading" design where parts go in through the top instead of the side like we see with the Borg-Warner T-10, Muncie M21/M22 (used by GM), and Chrysler four-speed. Ford's four-speed is the most rugged gearbox in the world thanks to this top-loading design. By the way, the 3.03 three-speed is nothing more than a three-speed Top Loader, with the same rugged architecture and dependable operation.

Although the Top Loader was used in a variety of Fords and Mercurys, Mustangs employed an easy-to-understand lineup. Mustangs were equipped with the 26-inch-long Top Loader with a shifter boss located at the end of a 14-inch tailshaft housing. The most common Mustang Top Loader has a 10-spline, 1 1/16-inch input shaft, as used in small-block and 390ci FE big-block Mustangs. It was available with both wide- and close-ratios. More powerful big-block applications, such as the 428, got wide-ratio Top Loaders with a 10-spline, 1 3/8-inch input shaft. The size of the input shaft is one of the quickest ways to identify a Top Loader before getting down to more specific identification.

Mustangs Etc. provided us with a '65-vintage small-block Mustang Top Loader with the 1 1/16-inch input shaft with wide-ratio gearing. Marvin McAfee of MCE Engines wanted a close ratio with bulletproof internals needed to stand up to 600 hp. That's when we turned to Anaheim Gear for solutions.

Although you can rebuild a Top Loader in your home garage, we suggest letting a professional shop, such as Anaheim Gear, do it for you to ensure best results. The main purpose of this article is to show you what's needed make a Top Loader four-speed perform better as well as be durable for thousands of miles of trouble-free service. 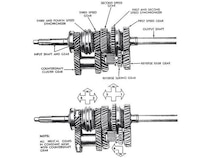 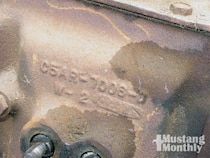 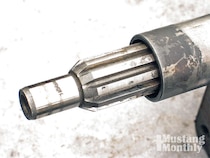 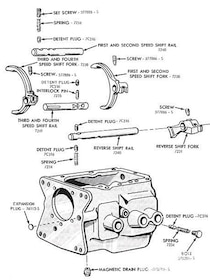 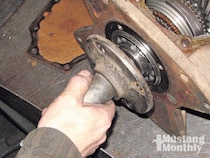 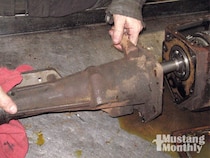 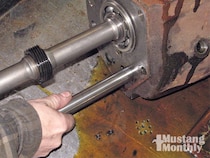 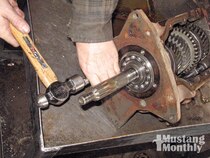 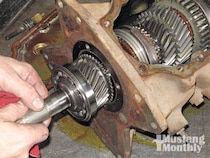 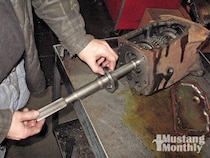 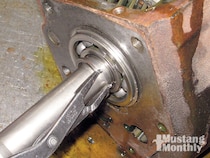 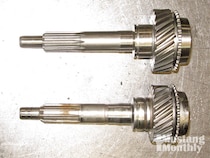 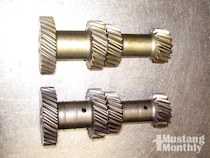 Here, we have four gears. On top is Second gear in 28-tooth (left) and 31-tooth (right), the latter being wide-ratio. On the bottom is a pair of Third gears, both 25-tooth, which applies to close- and wide-ratio.

Close vs. Wide Ratio
Which Top Loader transmission should you chose, close or wide ratio, and why? Close-ratio is centered mostly around quick acceleration, which is why you'll find them in the Boss 302, Shelbys, and other high-performance applications. Wide-ratio makes more sense for open-road driving.

How do you identify close- or wide-ratio? Although we want to trust the identification tag, that's not always possible because many of these older transmissions have been rebuilt in the past. In some cases, close-ratio transmissions have been converted to wide-ratio and vice versa. In fact, we're taking a wide-ratio box and turning it into close-ratio for racing purposes. When you want to be certain, pop the top cover and count the gear teeth.

Blueprint a Top Loader
According to Marvin McAfee, you can blueprint your four-speed. Blueprinting is a fancy word for sweating the details. It's the tiny imperfections that can bite you. High spots and score marks in an input shaft will cause clutch disc hang up. Ditto for the clutch hub, which can have the same kind of flaws. Never install anything right out of the box because new doesn't mean flawless. Marvin has dressed the input shaft splines as well as output splines for smooth operation. He also dressed the McLeod clutch hub. His crowning touch is the use of a real clutch pilot bearing, not a bushing. A clutch pilot bearing will yield smoother, more reliable clutch operation, even on a stocker.