Take The Mystery Out Of Getting A Smooth Upshift

It's safe to say that the biggest vintage Mustang sore spot-outside of leaking cowl vents and failed window mechanisms-is unreliable clutch operation. It can be said that '65-'73 Mustang clutches are among the worst to come out of Detroit. From the factory, they had stiff pedals, erratic operation, and frustration unequalled as they began to wear. If you were hell-bent to go fast in a classic four-speed, you learned the task would never be easy.

To improve clutch engagement in old Mustangs, we opted for high-performance clutches. These made the factory clutch linkages fail, sending us to the Ford dealer for a new equalizer shaft-also called a Z-bar-which promptly broke under the strain of the high-performance clutch. To solve that problem, we welded on more steel to make them stronger. Ultimately, our performance improvements did little to fix the problem. So what can be done about chronic Mustang clutch operation?

Under the dash, the pedal support assembly isn't up to the job, either. The pivot pin rides on plastic bushings that don't hold up under the strain. When the plastic bushings wear out, metal-to-metal contact causes severe wear.

Success comes from having good, serviceable parts. To achieve smooth operation, replace worn-out pedal supports, equalizer shafts, and other parts with new components. Service the new parts with plenty of white grease and use the felt seals provided with the kit. Make sure your clutch is properly adjusted, and periodically check it when you do a tune-up or brake job. Then enjoy the drive.

Clutch Troubleshooter
Clutch problems are easy to solve when you are armed with information. Why do clutches chatter and slip? What's that strange noise? Why does the clutch disengage only when the pedal reaches the floor? Why won't the clutch disengage? Why is there gear clash when I upshift? Here are potential problems and solutions.

Clutch performance issues are rooted mostly in wear and a bad design. When pressure plate springs grow weak through time and use, they don't hold the disc as firmly as they once did. Clutch friction discs wear out, similar to brake shoes and pads. When they become glazed, they become ineffective. Mustang clutch problems are mostly due to Ford engineers specifying a heavy-duty clutch for a light-duty linkage. Three-finger clutches create a lot of pedal pressure and are stiff because they're designed for a heavy-duty release mechanism. Not even high-performance Mustang applications had that kind of clutch-release mechanism.

The complaint we hear most is clutch chatter, which generally indicates improper adjustment. It could also come from a binding linkage. If you still have chatter once proper adjustment is accomplished, the clutch pilot bushing and transmission input-shaft bearing are the final suspects. 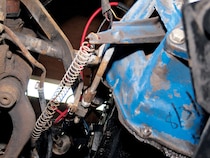 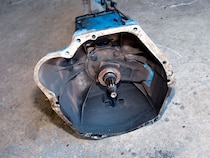 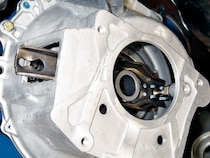 Stop The Chatter
Whenever you have clutch chatter, check adjustment first. Also check the integrity of the clutch linkage. A binding linkage can cause chatter. After these items, look at the clutch pilot bearing and transmission input-shaft bearing. Sideplay in the input shaft will cause chatter, as will a glazed clutch disc and pressure plate. Also, any lubrication that gets on the clutch disc and pressure plate will cause slippage and chatter. Smooth engagement comes from smooth operation.

Clutch Adjustment
Proper clutch adjustment is the key to clutch survival and proper operation. As clutches wear or are replaced, they require adjustment.

Adjustment begins with what you feel and hear. With the engine running, slowly step on the clutch pedal. Take note of when you can feel the vibration of the engine's rotation through the pedal. The point between touching the pedal and feeling engine rpm is called free travel. That's the time when nothing happens, right before clutch release-bearing contact. When there is a problem with free travel, the adjustment rod needs to be changed to get it within specs.

Although Ford has an involved approach to clutch adjustment, we're more seat-of-the-pants about it. There's an easier way. Clutch adjustment boils down to feel and preference. It should never be adjusted where the release bearing-also called a throwout bearing-is constantly touching the clutch fingers or diaphragm. This will cause premature wear and failure. Turn the clutch-rod adjustment to where pedal free travel is a minimum of 7/8 inch for the '65, or 1/2 inch for model years '66-'73. You want a maximum of 1 1/8-inches of free travel. The amount you come up with depends on what's comfortable to you.

For '65 and early '66 models, clutch adjustment is at the pushrod coming through the firewall. Adjust the equalizer bar fore or aft to get 7/8- to 1 1/8-inches of free travel. With each adjustment, raise engine speed to 2,000 rpm. If you can feel the engine just touching the pedal, free travel isn't enough. That's when you must back the adjustment off to get the release bearing out of the clutch fingers/diaphragm.

Beginning in the '66 model year, Ford revised the clutch release linkage, moving adjustment to the clutch fork, where it stayed through 1973. The same situation applies here: adjust the rod tighter to reduce, or looser to increase free travel.

Once the adjustment is made, work the clutch several times with the engine running, then see how much free travel you have. Remember, the amount you have is a personal preference. Some don't like much, while others like it sloppy. Ford's limits apply in all cases.

Quick Clutch Tech
There are three basic kinds of clutches: Borg & Beck, long, and diaphragm. We're inclined to add a fourth: Centerforce, a diaphragm-style clutch that grips better with rpm. Flyweights tied to the diaphragm increase grip with engine rpm and is a great innovation in clutch design. This is basically the only clutch we ever use.

Three-finger Borg & Beck and long-style clutches are more traditional designs. They work well, but are hard on clutch-release linkage. Although they were original equipment, they aren't the best for a classic Mustang.

Clutch Linkage Identification
When we headed to Mustangs, Etc. to learn all we could about clutch release mechanisms, we thought it would be a simple task. It wasn't. Not only was there an equalizer shaft for each type of engine, but also engineering changes from year to year. Ford struggled with warranty issues and customer criticisms regarding clutches. With each crop of complaints, the company went back to the drawing board and made changes in design.