The Correct Parts And Routing Are Important For Eliminating Leaks 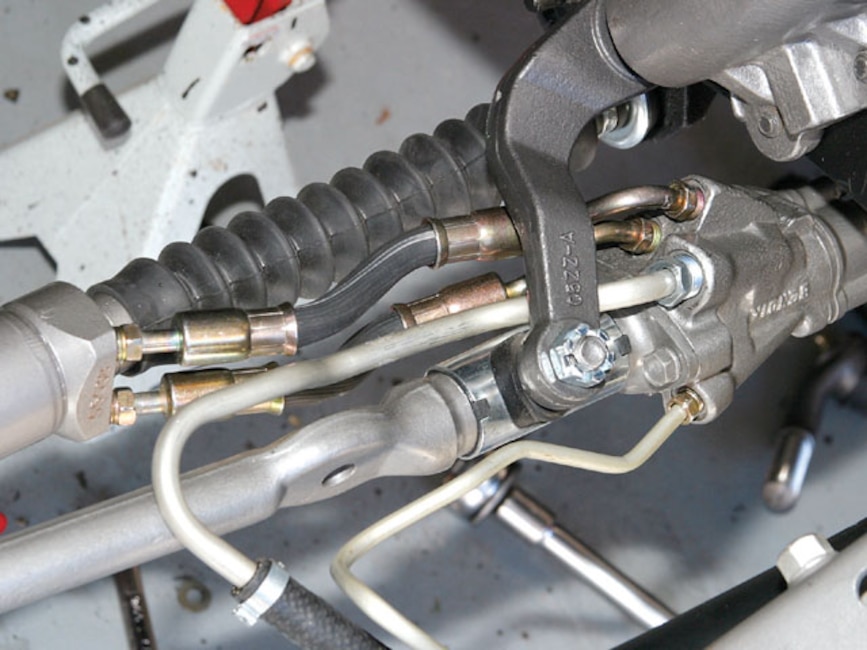 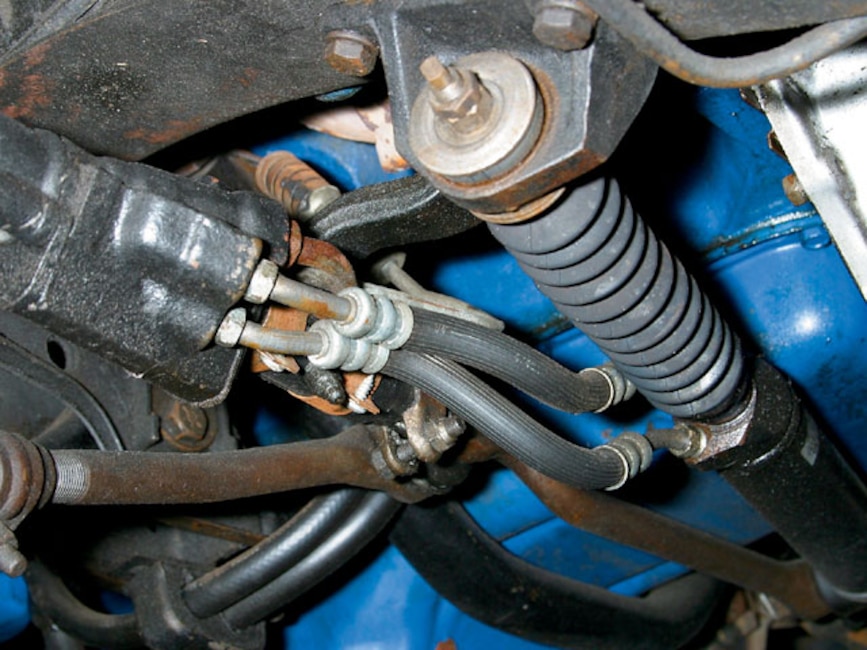 This is Ford's Bendix power-assist steering found on '65-'70 Mustangs. It consists of a control valve, power ram, pump, three pressure hoses, and one low-pressure return hose. Steering input at the control valve directs pressure to one side of the power ram or the other. 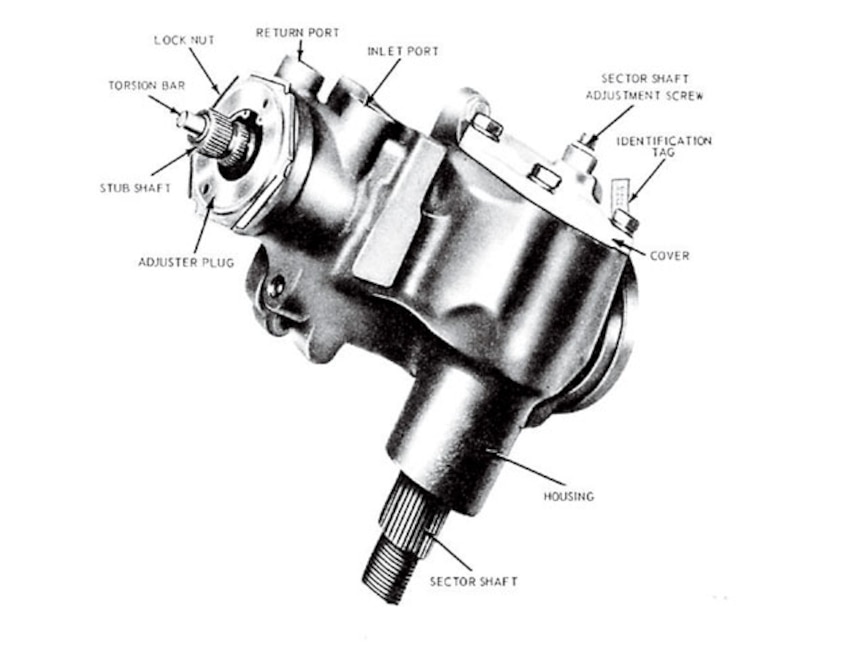 For '71-'73, Ford used a Saginaw integral power-steering gear on the Mustang, as well as other compacts and intermediates. It's less complex than the Bendix system and more reliable. It won't fit a '65-'70 Mustang, so forget about it as an easy way to replace the Bendix system. 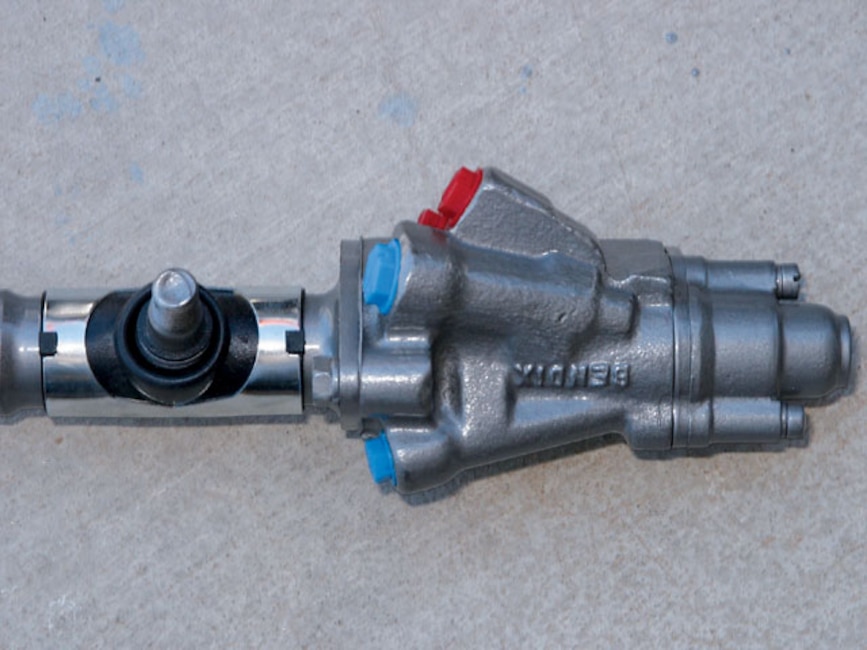 This is a remanufactured Bendix power-steering control valve from Mustangs Plus. As you can see, the control valve is tied to the steering-gear Pitman arm. Steering left or right moves the control valve, directing pressure to either side of the power ram (also known as a steering actuator). Control valves can be sent out for rebuilding or you can rebuild them yourself. 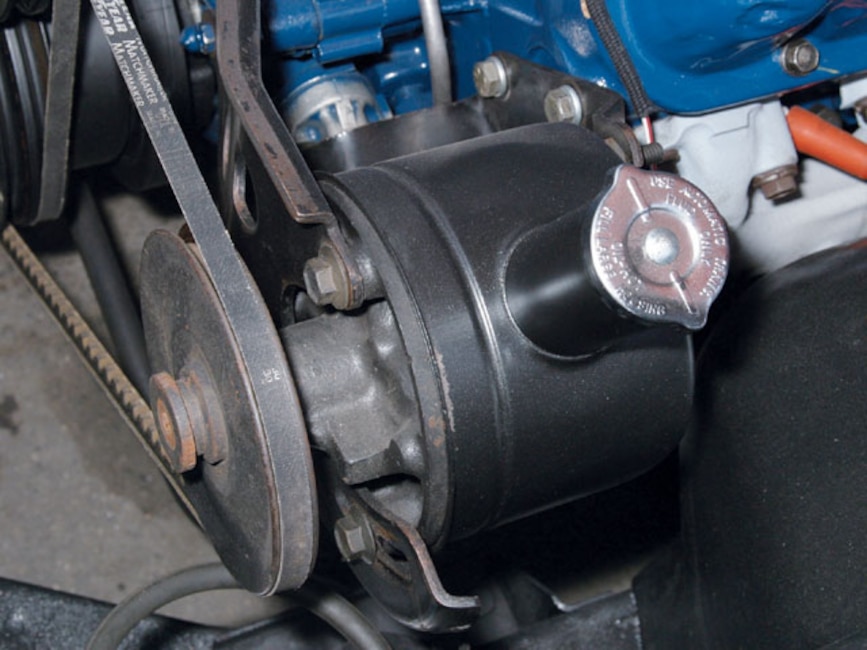 The Ford/Thompson pump was phased into production in Fall 1964. It is an entirely different pump than the earlier Eaton, with different brackets and hoses. The Eaton pump can be swapped out for a Thompson unit, but be prepared to change everything, including pump, brackets, pulleys, and both the pressure and return hoses. 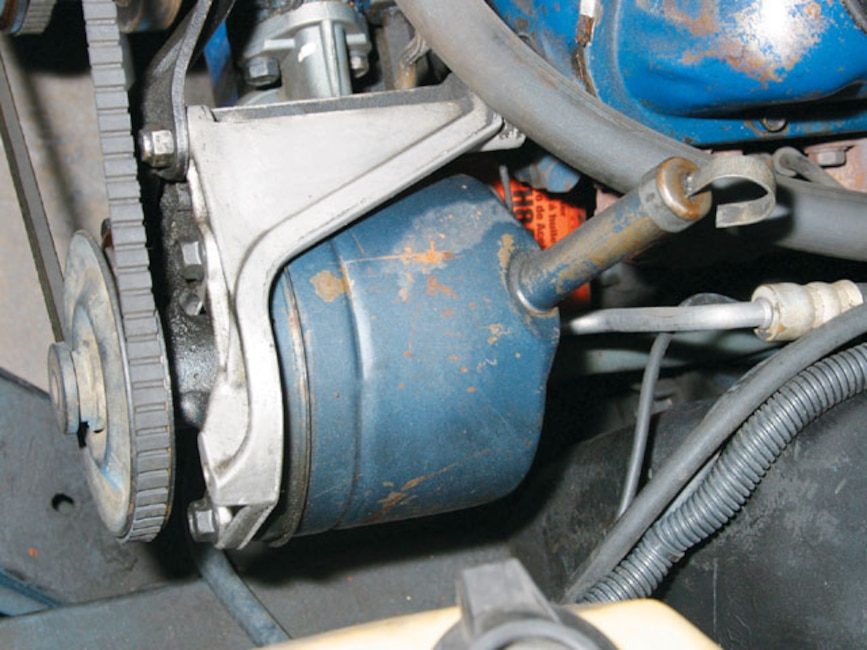 For '67s, the Ford/Thompson pump housing changed to a small dipstick tube at the back of the pump on air-conditioned models and midpump for those without A/C. The small-tube Thompson pump remained virtually the same through '78 except for fitting changes. 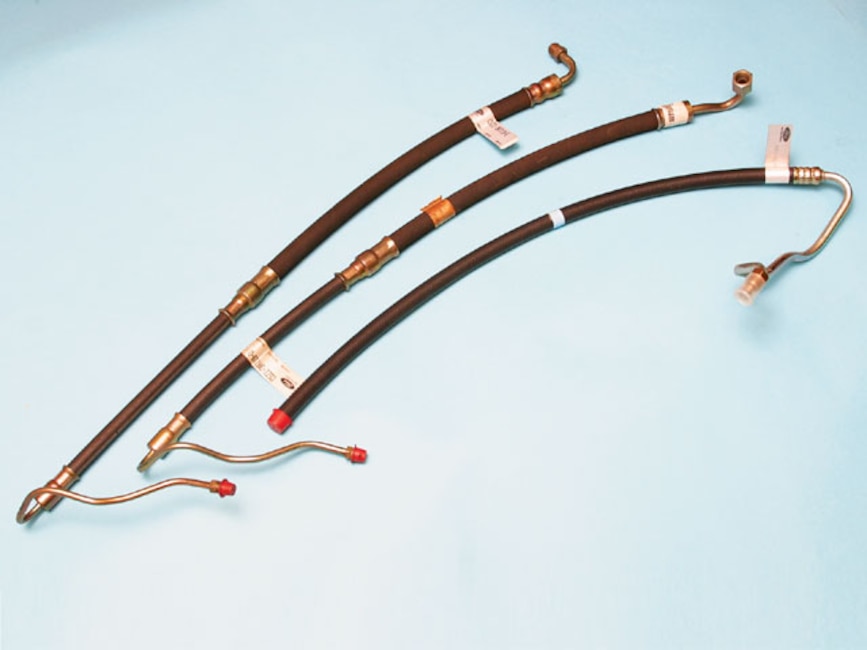 Garrett Marks of Mustangs Etc. shared his inventory of N.O.S. Ford power-steering hoses with us. These are '65-'66 hoses for a 260/289 V-8 Mustang. Both the Eaton and Thompson hoses are shown here. 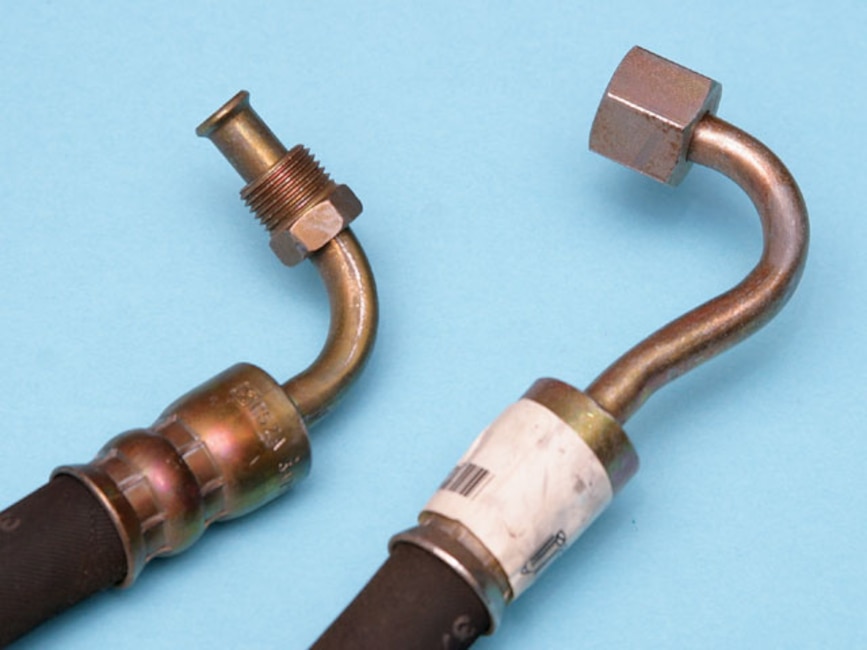 The Eaton pump takes a pressure hose with a male fitting; Thompson gets the female fitting. Otherwise, both hoses are virtually the same.

We publish dozens of car features every year in Mustang Monthly, but many times we get cheated out of the cool down-low shots because of unsightly power-steering hoses hanging in the slipstream. So Editor Donald Farr gave me this assignment to educate readers.

Proper installation and routing of power-steering hoses is necessary for safety as well as aesthetic reasons. Nothing gives you perspective quicker than a failed power-steering hose at highway speed when steering becomes rock hard. Also, the hot hydraulic fluid hitting the exhaust manifold often starts a fire.

Power steering is hydraulic-pressure-assisted steering, utilizing fluid under pressure to do the work. Power steering gets its pressure from an engine-driven hydraulic pump, which makes approximately 1,800 pounds per square inch (psi) of hydraulic pressure. Pressure created in the pump cavity travels to the control valve, which directs pressure to an actuator (power ram) based on which way the steering wheel is turned.

Bendix Power-Assist Steering
Bendix power-assist steering, used in the '65-'70 Mustang as well as other Ford compacts and intermediates, is a rather crude arrangement by today's standards. It tends to leak and requires a lot of fine-tuning. Hose configuration is very important.

For '64, Ford fitted the Mustang with an Eaton cast-iron power-steering pump with a stamped-steel reservoir that could be integral or remote, depending on application. Late in '64, Ford went to the Ford/Thompson power-steering pump, an entirely different package used on '65-'78s. For '65-'66s, the Thompson pump has a large filler tube and dipstick. Beginning with '67, the dipstick tube got smaller and was located toward the back of the pump. What makes the Thompson pump different is its stamped-steel housing with the pump located inside. Through all its many variations between '65-'78, the Ford/Thompson pump didn't change internally, but fitting and hose configurations did change from year to year. This makes it challenging to swap pumps from one year to another-but that's another story.

Although the Eaton and Thompson pumps do the same thing, they're not interchangeable. They don't use the same brackets and pulleys, nor do they employ the same hoses. The Eaton pump is an older design, whereas the Ford/Thompson unit is more contemporary.

During the '70s, Ford made significant improvements to the Bendix system. Although the basic Bendix power system didn't change, hose design and routing did. The pressure line became male-ended at the pump on '70s and stayed that way through '78. Ford routed the pressure hose away from the hot exhaust manifold and underneath the vehicle for improved cooling and a cleaner installation.

When replacing Bendix power-steering hoses, proper routing and installation is important to function, safety, and appearance. If using all genuine Ford parts, installation is easier than with aftermarket parts. It's a challenge for the aftermarket to make Bendix power-steering hoses that are dimensionally correct, so they suffer from improper bends and radiuses, length, and fitting sizes. This is why we stress using original-equipment Ford hoses and hardware whenever possible. Unfortunately, Ford hasn't made power-steering hoses for classic Mustangs in at least 10 years, which leaves us at the mercy of supply and demand.

For '71-'72s, the Thompson pump and hoses are the same. Late in the '72 model year into '73, Ford shortened the hoses and simplified routing for ease of maintenance and improved reliability.

Tips to Stop Leaks
Mustang power-steering systems are well-known for leaking all over the place-in garages, on the driveway, and all over parking lots. First, determine the leak source. Most Bendix power-steering leakage comes from line fittings. When line flairs and inverted flairs don't mate properly, they leak. It isn't just about tightening a fitting firmly, it's about having a smooth marriage between flair and inverted flair. Without a clean fit, all the tightening in the world won't stop leakage.

Other leakage points include ram and control-valve seals. Seal leakage calls for control-valve or power-ram rebuilding, but determine why seal failure occurred. Examine seal-mating surfaces closely for scoring (scratches and nicks), which can damage seals.