Jim Smart
August 13, 2007
B&M Racing & Performance provides just about everything you need to perform a complete C4 build, including the Holeshot 2400 torque converter. The Holeshot torque converter has a stall speed of 2,400 rpm, perfect for getting a small-block Ford into its power band before things begin to hook up.

In the beginning, the C4 was a dual-range automatic transmission, meaning you could drive it in two individual ranges depending on driving conditions. For most of us with '65-'66 Mustangs, that means driving on the little dot or the big dot on the transmission selector-big dot for normal driving and small dot for Second gear only in ice and snow. It didn't take Ford long to figure out this idea didn't work well because not enough people understood it. Some chose to drive on the small dot in error, never leaving Second gear and burning up the transmission.

Beginning in 1967, Ford made the C4 more like other automatics of the period, with a more traditional P-R-N-D-2-1 shifter pattern, ditching the dual-range idea altogether. This made the C4 more user-friendly. From then, the C4 experienced a lot of refinements that made it durable, and it remains the simplest, most reliable Ford automatic ever. Many late-model Mustang racers have come to know the C4 as a terrific automatic transmission for racing, even choosing it over GM's two-speed Power Glide automatic for some racing applications.

In its more than 20-year production life, the C4 was first known as the Cruise-O-Matic and then the Select Shift. In fact, the C4 became the C5 in 1984, sporting a locking torque converter for improved efficiency. It is a hardy, rugged, reliable automatic you can do just about anything with. 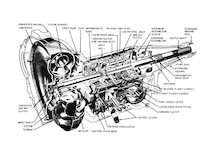 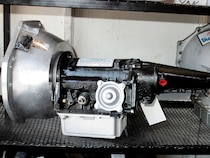 C4 - The Differences
As you might expect, the C4 evolved throughout its production life. The first significant change was the valvebody when the dual-range feature was eliminated for 1967. You can install a '67-and-later valvebody in a '64-'66 C4 because the valvebody is the only change. With the valvebody change also came changes (detent positions) in the shifter linkage. These should be addressed when swapping by using the proper indicator.

It really becomes tricky with '71-and-later because the input shaft and forward clutch hub became both 24- and 26-spline. From '71-and-later, the torque-converter end of the shaft is 26-spline and the forward-clutch end is 24-spline. Adding to the confusion, there are a variety of different cases that include case-fill dipstick tubes or pan-fill dipstick tubes. Ideally, you should find a complete '71-and-later C4 transmission with all of the improved components so you won't have to hunt down compatible parts.

There are many C4 and C5 bellhousing types for a variety of applications. Don't make the mistake of picking up a pump-mount bellhousing for a case-mount C4 and vice-versa. It's easy to make that mistake as these bellhousings look so much alike at first glance. The most obvious difference is 157-tooth versus 164-tooth flexplates. Check depth first, then casting number.

Because there are endless variables in C4 bellhousings, not all of them are mentioned here, and not all this information is complete. Ford has a time-proven reputation for engineering changes and plucking old part numbers off the shelf in mass production. Expect anything when you go shopping for a bellhousing, including part and casting numbers not mentioned here. And remember, the C4 was used behind fours and sixes as well as V-8s. 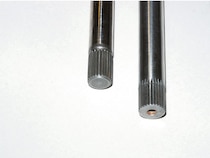 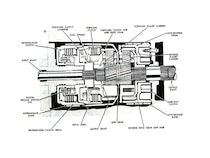 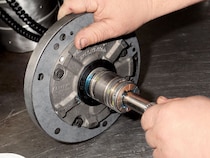 C4 Performance Basics
The best C4 to build is '70 or newer with the larger input shaft. Both the 26/26- and the 26/24-spline, .839-inch shafts, and forward clutch hubs can take more punishment than the smaller .788-inch, 24/24-spline shaft. Professional builders tell us the 26/26-spline shaft will withstand up to 600 hp. Of course, this doesn't always guarantee your C4 will survive 600 hp and the corresponding torque. A good rule of thumb is to go with a hardened aftermarket .839-inch, 26-spline input shaft (both ends). Some factory 26/26- and 26/24-spline shafts were hardened, but apparently these are few and far between. Your best choice is an aftermarket shaft.

Another important point with C4 performance is case selection. The '70-and-later case is considered stronger than '69-and-earlier because the bellhousing bolts to the case instead of the front pump. Transmission professionals also tell us the '82-'86 C5 case is better still thanks to oiling-system circuit improvements.

You can net the same oiling-circuit improvements in an older C4 by doing some of them yourself. Because the No. 9 thrust bearing in back of the C4 tends to be oil-starved and prone to failure, transmission professionals like to modify the case whenever possible to improve oil flow back there. As we understand it, the solution is to drill a 1/8-inch hole into the case that ties this thrust bearing to the oil-cooler return galley. Ford did this with the C5, along with an additional lubrication hole in the thrust bearing. Mention this to your transmission builder and get their take on this modification. Every builder is of a different opinion.

Another suggested modification is to smooth the oil passages by chamfering each of them to reduce fluid-flow resistance and turbulence. According to a few builders we've spoken with, this improves line pressure and fluid flow.

Flexplate Facts
There are two basic flexplate sizes for the C4: a 157-tooth (left) like we find in most compact and intermediate Ford applications and a 164-tooth (right) more common with heavy-duty truck and full-size Ford applications.

Also remember offset balance. If you're building an early small-block Ford (before '82), expect a 28-ounce offset (smaller counterweight). After '82, expect to see a 50-ounce offset with the large counterweight. This is common with '82-and-later 5.0L High-Output V-8s.

When shopping for C4 cores and parts, be mindful of the following differences: