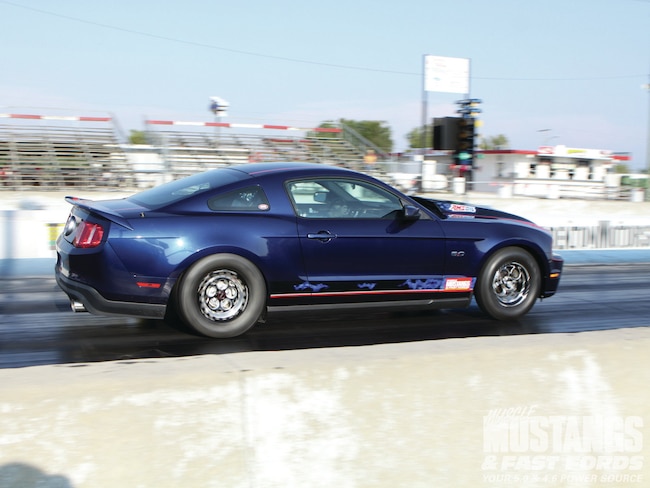 Low 11-second quarter-mile times are pretty impressive for the first outing with any carùespecially if the only serious power mods are an exhaust system and a supercharger kit. The maiden dragstrip voyage of our AMSOIL Mustang GT was a huge success. The car went a best e.t. of 11.22 at 124 mph from A to B with no drama. Considering the GT is equipped with a 3.15 rear gear and stock converter, breaking into the 10s should be a breeze, right?

With any performance-based, automatic-equipped vehicle, performance gains can be found with replacing the stock torque converter with an aftermarket unit. After our first trip to the track, we knew the stock converter was leaving a lot of e.t. on the table. Stock converters are tight, meaning they don't let the engine rev up quickly to maximize acceleration. With the stock converter, it was nearly impossible to powerbrake above 1,500 rpm, which made for less than desirable 60-foot times. Blend that with some less-than-aggressive transmission tuning, and performance for us was not optimized--especially considering the power level of the engine.

In this installment of our AMSOIL GT buildup, we turn to Performance Automatic (PA) of Gaithersburg, Maryland, to enhance performance. The stock torque converter, flexplate, and two-piece driveshaft are being put aside in favor of stronger, lighter components, which are designed to perform on the street and track. At the same time, we are ditching the stock 3.15 gears in favor of a 3.73 ring and pinion from Ford Racing Performance Parts. We also hit up BMR Suspension for one of its driveshaft safety loops.

The installation of these components, although fairly straightforward, is time consuming. We turned to AntiVenom EFI of Seffner, Florida, to turn the wrenches, and before we knew it, Greg Lovell and Kyle Miller had the 6R80 six-speed transmission out of the car for the swap.

The stock torque converter measures about 11 inches, which is based on the diameter of the internal turbine. The stocker flash-stalls at about 1,900 rpm, but when you break-torque (powerbrake) the car on the starting line, you begin to overpower the brakes just above idle. This results in the car pushing forward, reducing rollout or causing a redlight.

The new converter is built by Circle D Specialties for PA, and is constructed from billet aluminum with a 9.75-inch turbine wheel, and is designed to flash-stall at about 3,200 rpm. The smaller design means less rotating weight, which will allow it to spin up quicker, and the higher stall of will let the engine get into the meat of the torque curve quicker.

"A stock torque converter is designed for fuel efficiency, and not for max performance," explains Harvey Baker of PA. "It doesn't allow the engine to get into its optimal rpm range quickly. A higher stall speed lets the engine reach it's peak torque faster, which is more efficient and gives you better performance.

"Another benefit of a higher stall speed is during shifts. With a stock converter, the rpm will drop significantly with each shift. A higher stall will keep the revs higher so the engine stays in its power band."

Moving down the driveline, Performance Automatic also sent us an aluminum one-piece driveshaft to replace the stock steel shaft. The stock shaft has a joint in the center with a casing and mount that bolts in the trans tunnel, which could potentially be a weak link when big power is being transferred.

The stock two-piece driveshaft weighs in at a hefty 41 pounds. PA's new aluminum shaft checks in at a much lighter 22 pounds, which gives us a 19-pound weight reduction. In addition, the weight we lost is all rotational weight, which will help in the performance department. 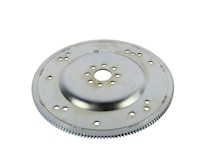 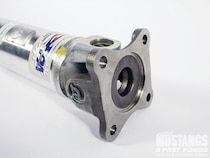 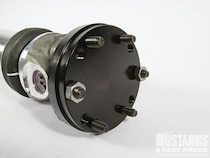 The rear gears were next on our agenda. Bruce Ponti of AntiVenom went to work removing the stock ring and pinion, and made quick work of the 8.8 internals. With the FRPP gears, the swap was relatively quick and easy, and we were ready to hit the track. Both the transmission and the rear were then filled with Amsoil Severe Gear 75W-140 synthetic rearend fluid and Dominator 5W-20 synthetic racing oil respectively.

With everything loaded up, we headed to Bradenton Motorsports Park for a few more passes down the 1,320. Due to time restraints, we didn't have the opportunity to change the transmission calibration.

After filling the tank with VP Race Fuels' VP100 (StreetBlaze) 100- octane unleaded fuel, we headed into the burnout box. The first pass was made with some caution in case the 1-2 shift didn't occur. We were pleased when the first shift was significantly quicker and harder than in previous attempts.

The Nitto drag radial barked as the 6R80 shifted into Second, but unfortunately, that was the best shift of each run. As our AMSOIL GT scooted down the quarter-mile, each subsequent shift became lazier. It launched much better, but the engine was over-revving and the shifts were very lazy, killing any gains off the line.

Nevertheless, we were pleased with the new higher-stall converter that allowed the engine to zip into the higher rpm range with ease. With the shifts happening a solid 800-rpm higher than programmed, the engine was out of its power band. Couple this with slow shifts and the soupy, 90-degree, humid Florida air, and you have less than favorable conditions.

Our best attempt netted us an 11.27 at 122 mph, and although this was about 0.05 seconds slower than our previous best, we were very pleased to see a strong improvement in the 60-foot. Previously, our blown Coyote got through the short section in 1.71 seconds. The addition of the PA/Circle D torque converter and FRPP gears dropped the short time to 1.58 seconds, and all this with no change to the transmission tuning.

Even though we didn't find the big performance gains we were hoping to see, the groundwork is laid for some seriously quick e.t.'s once we spend more time altering the parameters in the Copperhead ECM.

Check www.musclemustangfastfords.com for exclusive videos and photography of all of our product and track testing. 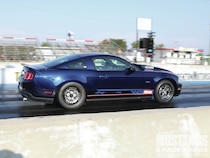