Improving The Drivetrain Efficiency Is As Good As Adding More Horsepower And Torque. 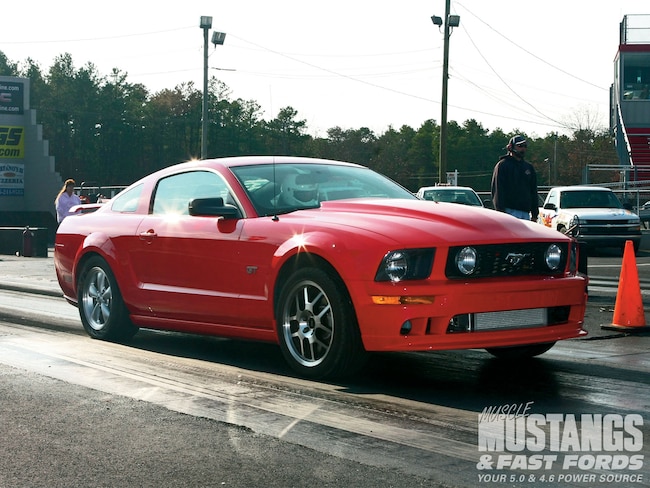 Speed is addictive, and we're always striving to go quicker and faster, and it seems to be getting easier in the modern world. Take, for example, the '07 Mustang GT featured on these pages. Last year, we added a Ford Racing Performance Parts supercharger kit, Steeda 10-rib pulley upgrade, custom tuning (Diablo-Sport), and a set of drag radials. That led us down a path of mid-11s with a best of 11.49 at 119 mph (with 479 rwhp through the stock automatic).

This year, the question was: What are we going to do in order to run quicker? Right off the bat, I conjured up a half a dozen ideas to increase power as a means to run quicker down the ol' 1,320. More power equals quicker times, right? In today's world of chassis-dyno racing, that seems to be true. There are, however, other ways to run quicker, and it doesn't involve adding horsepower.

Ultimately, we picked up nearly 0.3 second and we didn't add one horsepower. In fact, all of our testing was done with less horsepower than what was originally thrown down on the dyno-more on that later. Our focus for this story is improving acceleration, and we turned to the drivetrain for some time-honored modifications, namely an aluminum driveshaft, a steeper set of gears, and a looser torque converter. The purpose for the mods was to increase efficiency by utilizing the powerband of our twin-screw-blown, Three-Valve modular engine.

The rear gears are simple-the more gear multiplication, the quicker the car accelerates (to a point). We settled on Ford Racing 4.10 gears as a suitable replacement for the 3.31 factory cogs. Most will scratch their heads and wonder, Why such a steep ratio (numerically higher number) with a twin-screw combo? The goal was to optimize track performance, but not at the cost of the car's street manners.

"A higher numeric gear ratio will allow the engine to accelerate the car more efficiently and keep the car in it's powerband throughout the entire run down the track," said Justin Burcham of JPC Racing. "The optimum scenario for determining your gear ratio is to have your car cross the finish line with the engine just above your shift point. That way, you're using the entire powerband of the engine and crossing the line in the final 1:1 transmission gear at peak rpm."

The lowest gear ratio (though numerically high) we were willing to go with was a 4.10 since we drive the car everywhere. The 4.10s would put our trap speed in the 6,300-rpm range based on the car's previous quarter-mile speed (119 mph) and the Mickey Thompson's 26-inch-tall tire size. The highway rpm range is acceptable as well, as the math shows the engine will run at 2,643 rpm in Overdrive at 70 mph. The 4.10 gear offers the best of both worlds for track and street for this combo. If we add more power, thus increasing trap speed, then we could turn to a taller tire to knock down the finish-line rpm.

The next part on our list of modifications was to dump the heavyweight stock driveshaft for an aluminum one. The factory driveshaft in '05-present Mustangs is a two-piece unit that measures a robust 38 pounds. We picked up an Axle Exchange one-piece aluminum driveshaft that weighs half as much (19 pounds total). That saves 19 pounds from the overall weight, but more importantly its rotating weight. "The lighter driveshaft, like any lightweight drivetrain component, will allow the car to accelerate quicker because the engine doesn't have to waste power to accelerate the extra mass," commented Burcham.

The Axle Exchange one-piece driveshaft for '05-'10 Mustang comes with a price tag of $699. It's made from one-piece Alcoa 6061 T-6 aluminum and has a 4-inch diameter. The one-piece design eliminates the center CV joint, which has been a source of failure as power and traction are increased. 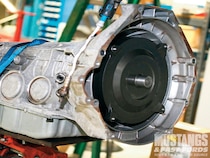 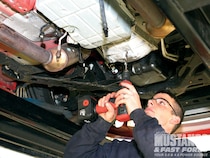 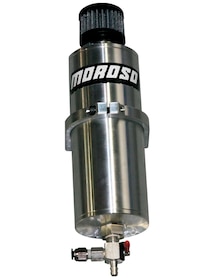 According to Kevin Winstead of TCI Transmissions, the general rule of thumb is that every inch of diameter change in the torque converter works out to be roughly a 500-rpm change in stall speed. The most common diameters range from 7 to 13 inches. More slip equals more heat, which limits how loose you can go in a street application. Of course, there is more to it, such as the angle of the fins inside the converter, but we'll leave that for another day. Note that the smaller the diameter, the higher the stall speed (looser converter).

Broken down, the common spec when selecting a torque converter is stall speed, a term that is often misunderstood. "Stall speed is the maximum rpm that the engine flashes to as soon as the throttle reaches WOT at the starting line. A high-stall converter allows the engine to flash to a higher rpm than the stock torque converter, both at the starting line and on the gear changes as well. The stall speed should be optimized to allow the engine to reach the rpm range where it makes the most power. This allows the vehicle to accelerate much quicker than with the factory low-stall torque converter," said Winstead. He continued to dispel some other misconceptions with stall speed. "Many people think that a 3,500-stall torque converter means that the car will not move until the engine reaches 3,500 rpm. That isn't correct. The car will still begin moving just above an idle." When you jump on the loud pedal and go WOT, the converter will flash to the stall speed and get you rolling quicker-provided the proper stall speed was matched to your combination.

The dyno sheet for our test car shows some serious low-end grunt, as the torque is over 460 lb-ft at around 3,400 rpm and remains above that mark until about 5,000 rpm. We want to exploit the long torque curve to help the car get moving quickly.

The most power our car made was 479 rwhp, but that was with 19 degrees of timing and 93 octane pump gas. That's what it made when we ran our best of 11.49 at 119 mph. After that test, we backed the timing down for everyday use. It was set at 16 degrees peak at 6,500 rpm (shift point). We wouldn't have to worry about getting some bad gas while tooling around town. The safer tune slowed the car down, and a month earlier it went 11.58 at 119.78 mph with the 4.10 gears. That was with peak timing of 16 degrees and Mickey Thompson ET-Street bias-ply tires.

To keep it all honest, we kept the street tune in the PCM for the after-testing with the TCI torque converter and Axle Exchange driveshaft. We ventured to Atco Raceway to get some on-track results. The gains were instantly realized as our GT ran 11.31 at 120.04 mph. That was a 0.27-second improvement over our previous best of 11.58 with reduced timing. The mph was similar, but the time was quicker thanks to a better 60-foot. The 11.58 came by way of a 1.71, and the 11.31 featured a 1.57 short time.

The 11.31 wasn't enough, so we plugged in the DiabloSport Trinity hand-held tuner and added a degree of timing through the entire curve, bringing it to 17 degrees at 6,500 rpm. Our car dug in, rocketed through the 60-foot clocks with the same 1.57, and made it to the finish line with a new best of 11.24 at 120.62 mph. Not bad for a car we drove to the track, swapped the tires, and only cooled down by opening the hood. On the street, the car is an animal, and the only difference is that the torque converter feels slightly looser.

Now we're thinking-with low 11s so easy, what would it take to run 10s?

On track and at 119 mph, the rpm will be screaming at 6,305 since we run on 26-inch-tall ET Street DOT tires. Given tire growth, the rpm will probably be a little lower, but we don't have an accurate way of accounting for it. Radials won't grow like bias-ply meats, so that factors into finish-line rpm as well. According to Burcham, ideally you want to select a gear ratio that will rev the engine no more than 500 rpm past your peak horsepower. If the finish-line rpm is above 500 rpm, then a numerically lower rear gear is needed or a switch to taller tires, which effectively changes the gear ratio. Burcham also suggested that if you are crossing the stripe and the engine is below peak hp rpm, then its time to add a more rear gear.

To calculate highway cruising speeds in Overdrive, simply take the trans Overdrive ratio and multiply it by the formula's result. In our case, a 70-mph cruising speed combined with the street-tire height of 25.9 inches gives us an engine speed of 3,723 rpm. The 5R55S has a 0.71:1 Overdrive gear, so it would knock the cruising rpm down to 2,643 rpm (3,723 x 0.71).