First Look: We Swap In An S197-Spec Tremec T56 Magnum And JPC Racing Conversion Kit For The 2011 Ford Mustang GT 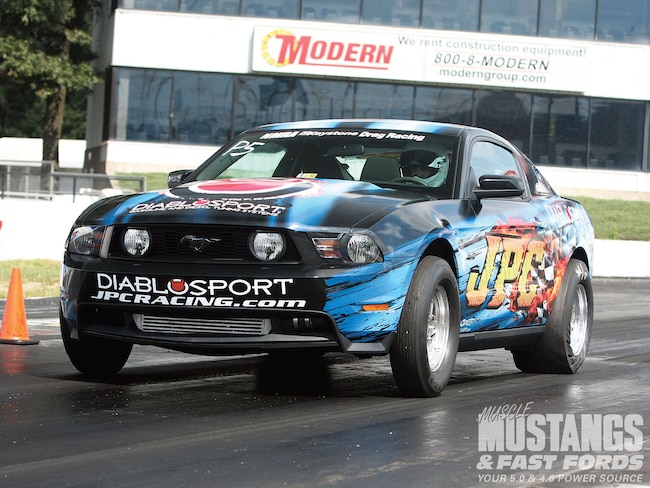 "I consider myself a pretty good stick-shift driver, and I have problems banging gears in the 2011 5.0L Mustang," was the comment Justin Burcham of JPC Racing said after a few months of dragstrip action in the JPC shop car and several customer rides. Ford utilizes a Getrag MT82 six-speed transmission for the manual-gearbox-equipped '11 Mustangs, and according to Burcham, it works well in the beginning, but as time wears on, shifting troubles arise.

"The transmission was great when I first got the car, but as we added power and there was more wear on it, then the shifting troubles began."

It wasn't just in his new '11 either. A few customers have had similar problems. It was an issue that Burcham needed to address if he wanted to keep pushing the envelope with his Paxton-supercharged 5.0L, so he decided to build a solution.

The Getrag also seems prone to breakage, even in some of the mildest combinations. Burcham explained, "At one point, when we were making just 430 rwhp with the typical bolt-ons, all of a sudden the transmission got stuck in Third gear. I haven't had a stock transmission stick in a gear since the old days of the T5." For those who don't remember, the Borg-Warner T5 transmission was offered in Mustang V-8 models from '85-'95. The transmission broke rather easily once you added a few parts and performed some spirited driving. Breakage aside, Burcham was more concerned with the problematic shifting. Anyone who witnessed the MM&FF 5.0L shootout saw the issues that a few of the stick-shift entries had in terms of consistency.

The JPC solution was to turn to a familiar company for a six-speed box that was up to the task of holding big power and offering more accurate shifting. Tremec is set to release (spring 2011) a T56 Magnum that's designed specifically for S197 Mustang applications, and it applies perfectly to the '11-newer Mustang. Tremec offered the transmission to Burcham, a longtime-sponsored racer with the company when it heard of his issues with the stock MT82.

Once available, the S197-spec T56 will be offered in a package to make purchasing and installing it in a 2011-newer Mustang an easy task. The kit includes a Tremec T56 Magnum S197 transmission, McLeod clutch (RST or RXT) and aluminum flywheel, choice of short-throw shifter (Tremec Adjustable Bias, Steeda Tri-Ax, or Pro 5.0), aluminum driveshaft, crossmember, and sensor hook-ups. 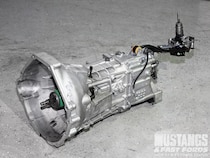 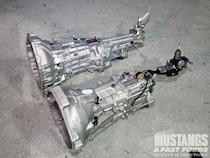 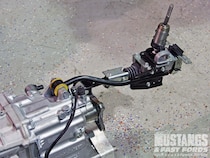 The S197-spec T56 Magnum offers several unique features; the first highlight that Burcham noted was the shifter arrangement. "The Magnum has a direct-shift setup rather than the semi-remote-mounted style that comes from the factory. The factory shifter is attached to both the body and the transmission, which causes issues when the power goes up.

"When you increase horsepower and torque, the unibody reacts more-now the shifter base is moving one way, while the transmission is moving another way, and that causes inconsistent shifting." The Magnum's direct-shift-style setup is far better for performance driving, both road race and drag race.

Direct-shift isn't the only benefit when converting to the new gearbox-the Magnum comes standard with a slip-yoke interface that lends itself nicely to use with a one-piece driveshaft. One major difference the driver will notice, aside from the shifting, is the gear ratios between the Getrag and T56 Magnum. The Magnum offers four forward gears, plus two Overdrive gears, while the Getrag has five regular gears and a single Overdrive gear. 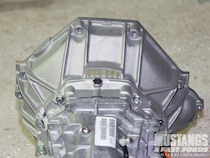 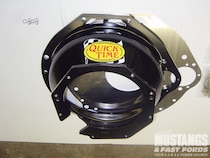 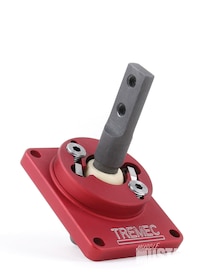 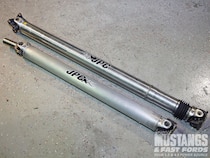 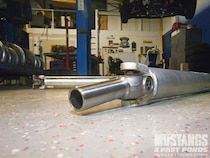 "I ran a pro-shifted Tremec TKO 600 in my '11 Mustang for the MM&FF 5.0L Shootout because we didn't have the T56 Magnum yet. We offer that conversion as well for the real hardcore racers out there," said Burcham. "Now that Tremec sent us a S197 Magnum, it's the transmission that will be in my car full-time. It might be hard to believe, but I do drive the car nearly everyday, and I need a reliable transmission that I can drive on the street. The pro-shifted box was a little too much, even for me," laughed Burcham.

Final pricing for the kit hadn't been set when we went to press as JPC Racing was waiting for the production release of the transmission from Tremec. The S197-spec T56 Magnum should be available shortly after the release of this issue.

"The T56 Magnum is essentially an aftermarket version of the TR-6060, which was first introduced in the Shelby GT500," said Nate Tovey of Tremec. The upgraded transmission had enough aftermarket-specific changes that the company felt it needed a new name, so it adopted the T56 Magnum moniker-a nod to its original T56 six-speed roots. Some of the major differences between the Magnum and TR-6060 include bearing upgrades, friction materials (carbon content) on the synchronizer blocker rings, dual speedometer pick-ups (electronic only for the S197-spec), dual cross-member mount threads, longer input shaft splines for multi-disc clutches, and hydraulic and mechanical release support systems.

A switch to this transmission does require a 26-spline clutch disc, two-bolt crossmember, and a one-piece driveshaft. This article outlines the '11 spec kit from JPC Racing but the company will also offer all the parts and pieces required for a '05-'10 conversion to the T56 Magnum.

Swapping to the Tremec T56 Magnum probably means that your Mustang is producing a good amount of power thanks to forced induction, nitrous, and/or serious engine modifications. That means you are going to need a good clutch between the engine and T56 Magnum to endure the abuse. The JPC Racing kit is offered with two clutch options, the McLeod Racing RST or RXT. Both feature twin-disc setups and offer a reasonable clutch pedal feel-meaning you don't have to take steroids in order to push down the clutch pedal.

Lee Kilcoyne of McLeod Racing offered this explanation, "The RST has organic discs rated to 800 flywheel horsepower, and the RXT has metallic discs rated to 1,000 flywheel horsepower." Essentially you have to figure out which clutch applies to your application and make the choice. As far as driveability, Burcham told us he has driven both styles and there isn't much of a difference on the street. He reported no chatter with either clutch, which is present in some other twin-disc setups, and pedal feel was great.

Kilcoyne did offer this advice when choosing between the RST and RXT: "It matters how much time the car will spend on the track, and the individual's driving skill at the track and racing. If they only need a RST but they're going to the track often, then they might want to upgrade to the RXT. If they have an oops at the track and glaze the discs due to poor burnout and such, then the unit has to be pulled to be fixed. If they have the RXT discs then the unit will recover and continue to function as designed."

If you are asking about it, why not just get the RXT? The answer is simple. The RXT retails for more money than RST. JPC offers the RST at $659; the RXT comes in at $859.