Hanlon Motorsports Prepares A Tremec TKO-600 Transmission For Abuse On The Street And Strip. 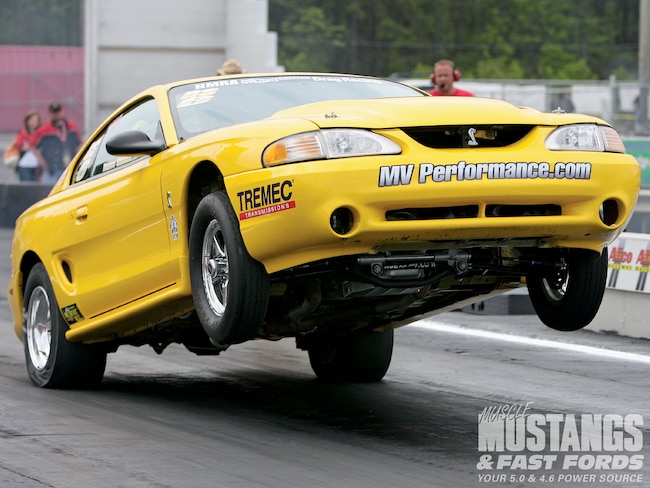 Each month, the pages of MM&FF are jam-packed with technical information on how to extract more power from under the hood of your Mustang or Ford. We venture into the install and testing of basic bolt-on parts, from mild builds you can do at home to wild 1,000-plus-horsepower engines capable of destroying anything you line up against. The influx of easy horsepower has led to lots of fun, but also some severe drivetrain failures. Even moderate power levels (400-600 rwhp) can be disastrous.

One popular solution for gear-banging enthusiasts has been the lineup of Tremec Transmission five-speed and six-speed gear boxes. The company first released the 3550 five-speed, and subsequently replaced it with the tougher TKO. As time went on, Tremec released the TKO-500 and TKO-600. Each is capable of handling increased power, and Tremec added various features to keep up with the demands. But at some point, even those boxes get abused and destroyed.

Enter Hanlon Motorsports, where owner Bob Hanlon has been at the forefront of repairing and upgrading manual transmission for over two decades. Hanlon Motorsports specializes in street, strip, and road-race five-speed and six-speed Tremec transmissions, as well as anything else that requires a clutch. This month we focus on some modifications available from Hanlon for the popular Tremec 3550, TKO, TKO-500, and TKO-600 units. Through the years, Bob Hanlon has learned a few things about the transmissions, and he modifies each to handle quite a bit of power.

Glancing over at the NMRA heads-up racing ranks shows Hanlon-prepped transmissions in a plethora of championship rides, mostly in Real Street, Pure Street, and Factory Stock. Many class record holders and champions utilize Hanlon-prepped transmissions. The advances and modifications Hanlon has incorporated in those race boxes have trickled down to the street, which benefits the majority of our readers.

Here, Hanlon shows us a few key tricks inside the Tremec five-speed, including the company's latest friction-lined blocker rings. During gear changes, the blocker ring's job is to slow down the gear in response to the shifter movement to engage the next gear. "The ring is like a brake shoe-it slows the gear down," said Hanlon. "The ring has a taper that matches the taper on the gear. When the shift fork starts to move the slider, the synchro key puts pressure on the blocker, which slows the gear down through the taper. It slows the gear down so the engagement teeth line up and engage the gear. When you miss a shift, those little teeth are what you hear grinding. They are trying to find a spot to engage," explains Hanlon.

According to Hanlon, the blocker rings are essentially the same basic design from the '60s-era Top Loader transmissions. The Hanlon Motorsport friction-lined rings were designed out of necessity. "As the horsepower and torque has increased dramatically, the transmissions need to be stronger and include heavier gears to withstand the power. The heavier gears have more inertia, so it's harder to slow down those bigger and heavier gears. The lined rings slow the gears down quicker to allow them to engage easier."

In addition to the horsepower and torque of today's high-performance engine comes higher rpm-7,000-8,000 rpm is common amongst the nastiest of street or race machines. The higher rpm has the same effect as the gear's greater mass-it needs to be slowed down more effectively. 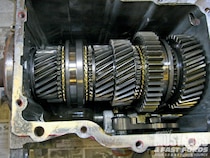 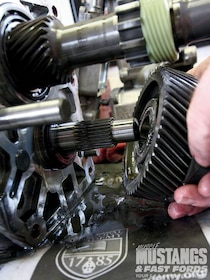 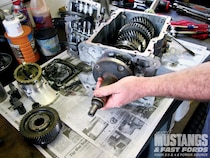 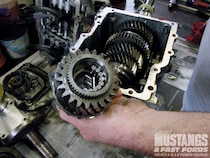 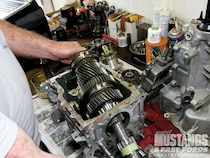 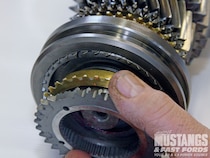 If the Tremec is destined for serious street/strip action, Hanlon can also build a hybrid Pro-shifted trans. Pro-shifting involves the removal of the engagement teeth and the installation of faceplate and dog-tooth rings to engage each gear. The slider is also machined to interface with the faceplate. This offers the ultimate in shifting, making missed shifts a thing of the past.

But Pro-shifting a transmission also makes it clunky on the street at part-throttle. Hanlon utilizes the Pro-shifting technique for just Third gear in street applications. That way you can skip shift and go from Second to Fourth to avoid the harshness of the Pro-shifted Third gear. Best of all, you can powershift Third with confidence, whether it's during a stoplight derby or at the track.

How to Properly Adjust Your Shifter Stops
Hanlon recommends Pro 5.0 shifters for Tremec transmissions due to their high quality, and most importantly, adjustable shifter stops. Adjustable shifter stops have been a source of debate and banter at the track, in garages, and on Internet forums, and Hanlon set us straight on the topic. "Tremec doesn't recommend using a shifter with stops because of the transmission's internal shifter stops. But (the company) never intended guys to shift these transmissions as hard as they do," he said. Hanlon went on to tell us that while the internal shift stops are good, they aren't designed to handle the quick and strong shifts (especially with long shifter handles for better leverage) performed during aggressive driving-like power-shifting.

Hanlon showed us the proper way to adjust the shifter stops, using a Pro 5.0 shifter with the company's long shifter handle. He likes the long handle for better leverage when throwing gears. According to Hanlon, the length of the handle will contribute to over-engaging the gears, and that can lead to broken and bent shift forks, as well as other internal carnage, over time. Using shifter stops helps prevent those problems.

Hanlon offers this advice: "I like to set the stops in Second and Third because those are the gears you're rowing the hardest. The stops will be set the same for Fourth and Second anyway. With the car at rest, I put the transmission in gear; then I run the adjustment screw/stop in to where it touches the shifter handle, and I mark its location. For an aggressive driver and a long handle, I recommend backing the screw off a half-turn; for a street guy, I go one full-turn. Then you should check the shifter in every gear to make sure each gear engages properly. The most common problem is Reverse not engaging fully. I feel the shift stops are necessary to prevent the shift fork pins from getting smashed, as well as damage to the shift rail/fork roll pin and shift forks. The stops have to be set correctly and locked down. Guys forget to tighten them and eventually the adjustment screws move."

*TKO-600 is available with an optional 0.82 overdrive gear for road racing applications.

Note: TKO-500 and TKO-600 come with several upgrades over the 3550 and TKO, such as steel shift forks for Third, Fourth and Fifth, upgraded materials on all gears and shafts, multiple shifter locations, and tapered roller bearings on shafts. The upgrades are designed to improve durability and reduce noise.