We Take A Closer Look At Tremec's T56 Magnum As We Install One In Project Shake 'N' Bake. 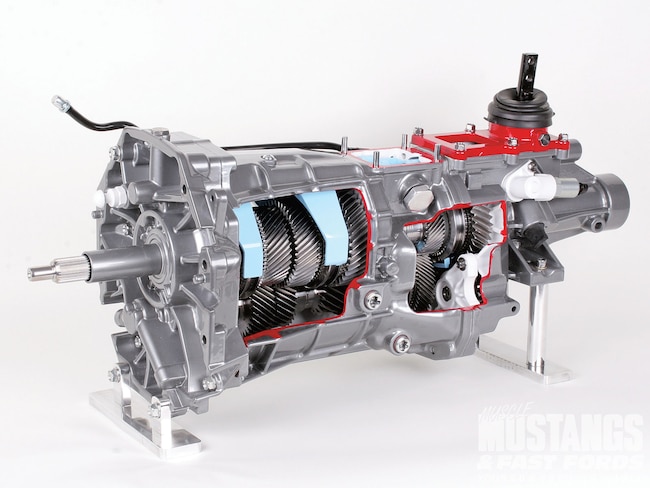 It's been almost a year since we started modifying and racing project Shake 'N' Bake, and after well over 100 quarter-mile passes, a half dozen autocross and open-track days, and over 10,000 (not so easy) street miles, our '03 Mach 1 is finally getting a well-deserved transmission upgrade.

For those who've followed this project since the beginning, you may remember we had transmission issues early on. Prior to purchasing our Mach 1, a not-so-reputable performance shop (which is no longer in business) duped the Mach's owner and swapped the stock TR-3650 for a T45 that was collecting dust in the corner of the shop. We discovered the alien transmission only after the shifter came apart at a local autocross event. After inspecting the trans and not finding any damage, we swapped the broken shifter for a UPR Blue Thunder and went on our way.

Last month, we spent a few days at Blow-By Racing in Boca Raton, Florida, installing a 4.6 Aluminator engine from Ford Racing Performance Parts. While the engine bay and trans tunnel was empty, we took advantage of the situation and put the tired T45 out to pasture.

Replacing it is Tremec's all-new T56 Magnum, which came from D&D Performance in Wixom, Michigan. The transmission came as part of D&D's six-speed kit, which includes everything you need to swap your five-speed for a six-speed. When our T56 Magnum arrived, a factory aluminum bellhousing, transmission crossmember and mount, and custom aluminum driveshaft were included to make the installation a breeze. D&D also included a 26-spline clutch disc so we could reuse the pressure plate and flywheel already in the car.

The centerpiece of our transmission trade-up is the T56 Magnum from Tremec. Though it may not sound much different from the T56 we all know from the Terminator Cobras, the truth is they have very few things in common. The Magnum is based on the popular TR-6060 six-speed transmission, which was OE in many factory supercars, like the GT500. Everything from the case to the shifter has been redesigned specifically for this transmission.

"The T56 Magnum is a completely new transmission," explains Nate Tovey, marketing coordinator for Tremec. "The Magnum has a new range of flexibilities the old T56 never had." Tremec combined the technology used in the OEM T56 with the most popular features of the TKO-series five-speed transmission. This makes for a six-speed transmission capable of handling far greater torque without sacrificing the driveability.

"Most T56 applications are in the 450 lb-ft range," adds Tovey. "The changes made to the Magnum raise the rating to 700 lb-ft. We use triple-cone synchronizer for First through Fourth gears, and double-cone synchronizers for Fifth, Sixth, and Reverse. The synchronizers have also been narrowed in the T56 Magnum, which was done for two reasons. A narrower synchronizer gives us wider gear face (6-24 percent wider than the T56), which helps raise the torque rating. It also makes the throws shorter because the sliders have less distance to travel between gears." According to Tovey, the T56 Magnum has the shortest shift throws of any Tremec transmission to date.

As you dig deeper into this new transmission, the similarities to the TKO transmission become more apparent. The T56 Magnum employs dual speedometer pickups (mechanical and electric), a TKO-style moveable shifter for different shifter positions, and the adaptability to use SFI-approved bellhousings instead of the stock cast-aluminum bellhousing. 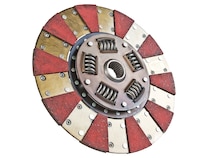 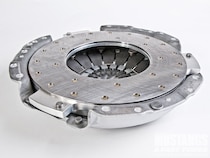 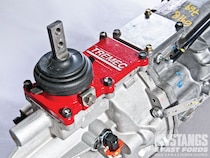 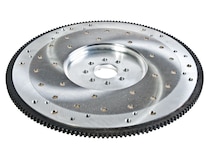 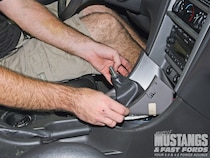 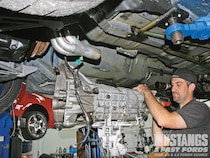 Once the 4.6 Aluminator engine was resting comfortably in the engine bay, it was time to install the new gearbox. But before the trans was lifted into place, we wanted to switch clutches. Centerforce sent us one of its LMC-series (Light Metal Clutch) to run in front of our new Magnum. Centerforce LMC-series clutches are low-inertia performance units, designed to reduce rotating mass for road racing or circle track applications. These clutches are SFI-approved and machined from high-strength aircraft-grade billet aluminum before a heat-treated replaceable friction surface is attached. They also feature a ball bearing-actuated diaphragm and centrifugal weight system, offering very high levels of grip, while maintaining comfortable pedal weight for daily driving.

Centerforce included one of its aluminum flywheels to complete the lightweight package. The aluminum wheel is machined from high-strength billet aluminum with replaceable steel friction surfaces, which have been heat-treated for abrasion resistance and long life.

We wanted to know just how much rotating weight was being removed, so the scales were pulled out. The Centerforce LMC clutch, aluminum flywheel, and aluminum driveshaft from D&D checked in 36 pounds lighter than the stock counterparts. That's some impressive weight savings!

After the new T56 was installed, we put roughly 600 easy miles on the car to break in the engine and clutch. Pedal pressure is now slightly heavier than stock, but it isn't too heavy by any means. Engagement is smooth, and the LMC-series has more than enough bite for our naturally aspirated Four-Valve.

All in all, we're very happy with both the Tremec T56 Magnum from D&D Performance and the Centerforce LMC-series clutch. Once we get back on track, we'll give you an update onour improvements at the dragstrip and through the turns.

Gear Ratios
When we ordered our transmission from D&D, we had an option when it came to gear ratios. Tremec offers two different gear sets. The lower (numerically higher) gear set offers shorter First through Third gears with taller Overdrive gears. This gives you the ability to add gear ratio for local driving with the benefits of lower rpm in highway conditions. The higher gear set is less aggressive, allowing you to stay in each gear longer. Due to the shorter overdrive gears, the rpm on the highway will be higher--or the box with the 2.97 First would be better for drag racing, the other box better for corner-carving on an open road course.