Jeff Huneycutt
February 1, 2013
Our candidate for the modern five-speed transmission swap is this ’67 Mercury Cougar that’s still lugging around its original slushbox. Although it has it’s own unique look, the Cougar is mostly first-generation Mustang under the sheetmetal. Here, Roush Yates Performance Products shop manager, Jeff Paxton, and the crew from American Powertrain, are busy pulling the original transmission and driveshaft.

Modern automatic transmissions have come a long way over the last 20 years. They are more efficient, shift smoother, and are sportier than ever before. But there's still no substitute for sawing through the gears on a twisty mountain road or the occasional track day. And when you compare the fun of a modern manual transmission to what you get from a 45-year-old slushbox—well, that's not exactly a fair fight.

That's why outfitting classic cars with more modern suspensions and drivetrains is so popular. You can combine the great looking designs of the past with the handling, comfort, and performance of modern vehicles for the best of both worlds. But the hassle of either hunting down or fabricating all the adaptors, brackets, linkages, and assorted hardware required to swap a modern manual transmission into a classic car equipped with an automatic is often the biggest obstacle.

American Powertrain started engineering complete kits to do exactly that. With each package, the company has done all of the engineering work, completed all of the fabrication, driven the test miles, and generally sweated all of the details to make sure everything works exactly like you think it should. Because the only surprises you should get are on holidays and your birthday. 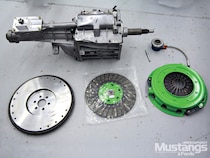 To see exactly what is involved in making such a swap, we visited Roush Yates Performance Products when it was installing an American Powertrain five-speed transmission into a '67 Mercury Cougar. This is the same Roush Yates that builds all of the Ford engines raced in NASCAR's Sprint Cup Series (and several other series), and the company has recently expanded its operation beyond engine building to working on customer cars—both hot rods and race cars—as well as dyno tuning.

American Powertrain has a Mercury Cougar shop car that's been used to science out the conversion, but since this was the first customer Cougar to see the upgrade, three of the crew decided to make the journey down from Cookeville, Tennessee, to the heart of racing country to help out with the install. Although we had the advantage of the American Powertrain staff handling most of the work on the install, this is something most gearheads can perform in the driveway over a weekend. The kit makes it possible because—at least in our case—the only thing we needed to get was a new driveshaft because of the longer modern transmission. 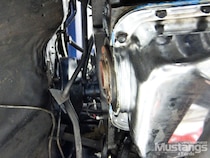 Besides the obvious improvements that you would expect from swapping out an original automatic transmission for a modern manual unit—more fun to drive, fewer breakdowns, improved fuel mileage—Roush Yates Performance Products also did a little dyno testing and the new transmission made more power as well.

With the stock setup, the 1967 Cougar produced a peak horsepower rating of 160.86 hp, but after the new transmission and clutch were installed, that number jumped up to 183.55. That's an improvement of 22.69 hp, without adding any stress to the engine. And best of all, significant improvement was seen all the way through the rpm range. The average horsepower went up around 10, which will make for a much more enjoyable classic car.

American Powertrain matched everything for our subject vehicle's slightly modified 289 V-8, with plenty of capability left over to handle future horsepower upgrades

When David and Diana Scott of Las Vegas, Nevada, decided to do something different with their Ford restomod project, they wanted to do something you didn't see at the Sign of the Cat in 1967. The end result is a rare car in an unusual color-a very yellow '67 Mercury Cougar XR-7. Read more about this rediscovered 1967 Mercury Cougar XR7 which has new Edleborck upgrades written in Mustang and Fords Magazine.

Join Mustang & Fords Magazine as they review the 10 hottest Cougars from Mercury.