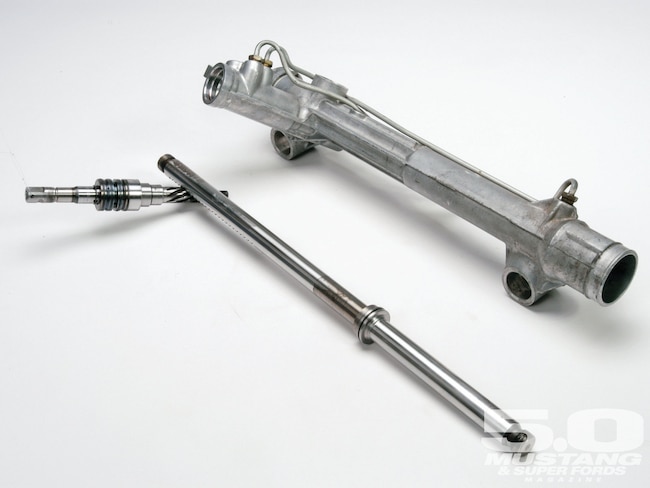 Steering racks are not the stuff of Mustang passion, at least not until your Mustang goes wandering or you're building a track car that needs the last word in precision. Then you need the expertise of chassis experts who have been studying Ford steering to keep their customers headed where they want to.

You need Maximum Motorsports, in other words. Which is exactly where we headed when we noticed the directional control in our '91 Mustang daily driver had degenerated into something more akin to stirring walnut-laced oatmeal than precise guidance. What we found was a subject far more detailed than we had guessed, but with a few clear-cut choices for the enthusiast once past all the theory.

To keep this discussion within practical limits, we'll confine ourselves to '79-'04 Mustang steering. These are the Fox and SN-95 cars that typically need attention. The '05-'11 steering is mechanically similar but already incorporates the improvements developed during the Fox and SN-95 era, plus the later steering racks mount completely differently and offer no interchange possibilities.

Let's start at the beginning. All Fox and later Mustangs use rack and pinion steering. This means the steering wheel is attached to a shaft passing through the firewall and connected to what we all casually call the “steering rack” or simply “the rack.” 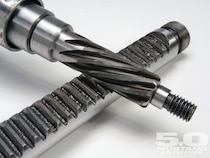 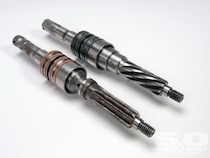 The real fun begins with the hydraulic power steering used on the majority of Mustangs. Here pressurized fluid is piped from the power steering pump to a control valve built into the steering rack. This hydraulic servo valve, typically called the spool valve due to its design, directs fluid into the rack assembly where it applies pressure against one side or the other of a fence built onto the rack. The fluid pressure thus assists the driver in moving the rack against the tire's traction.

To come right to the point, even after installing the best tires, new tie rods, urethane bushings, stiffer springs, a sport steering wheel, and all-metal intermediate steering shaft, there's still more precision to be gained by swapping a Fox steering rack for one of several SN-95 racks.

We're about to take a detailed look at the spool valve for those who want to know the hows and whys of its operation. There are a lot of words, so skip ahead if you just want the practical considerations, but you'll understand much more about your Mustang's steering if you wade through. 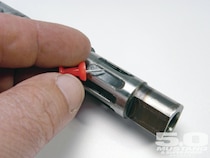 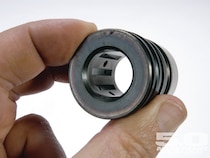 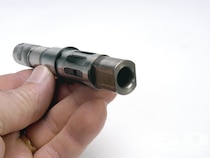 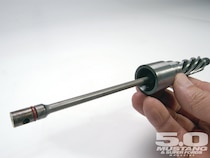 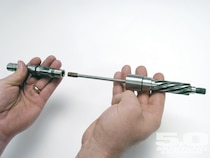 In a simple overview, imagine a thick-walled steel tube, about ¾ of an inch in diameter, in your left hand. One end of the tube has two flats machined into it. Now imagine a second shaft in your right hand, this one with a female socket end machined to accept the flattened end of the first shaft. The two shafts mate, but the clearances between the flats on the first shaft and the matching female socket's flats are loose. Put together, you can easily rotate the two shafts independently of each other a little bit because of the sloppy fit. But after about 15 degrees of free rotation the flats come together and the two shafts go solid.

OK, now we add a torsion bar to our mental assembly. The "T-bar," as the chassis engineers always call it, is a solid metal rod about the size of a pencil. It's firmly fixed to the shaft in your right hand, the one with the female socket. When the two shafts are slipped together, the T-bar slides through the hollow center of the other shaft, the one in your left hand with flats on the end. Once the two shafts are mated, a hefty dowel pin is driven through the shaft in your left hand and the end of the T-bar. This joins the T-bar to both shafts, and you can no longer easily rotate the two shafts independently of each other; the slop is gone.

But, as you've guessed, the T-bar is really a spring. Put enough leverage on the shaft in your left hand and it will still move relative to the second shaft, at least until the flats come in contact and the assembly goes solid.

If you've ever tried to coast your Mustang down a twisty road with the engine shut off, you've noticed how the steering feels--besides needing high effort, strangely gummy. You grunt the steering wheel a few degrees and nothing happens. Then all of a sudden the car turns and the effort drops sharply. Try to steer in the opposite direction and you go through the same sensation of winding a gigantic rubber band--that's the T-bar twisting followed by the flats finally going solid.

So, we've got our two shafts mated and pinned together via the T-bar. Now we'll add the final piece, a collar that slips over our shaft assembly. The collar is intricately machined and, among many features, has a shoulder in it that butts against the female socket on the shaft in your right hand. A dowel pin fixes the collar to that same shaft in your right hand so the collar is really part of that shaft.

Now, the collar has no locating function: It doesn't lock the two shafts together or anything like that. Its job is to form a valve in conjunction with the shaft in your left hand. Remember, the collar is pinned to the right shaft, but forms a valve with the left shaft.

Fine, you say, I now understand how the spool valve works, so what's the big deal? Well, after that, what matters is the exact shape of the edges of the grooves in the collar and lefthand shaft. And when we say exact, brother, we're talking small--like, so minute you need a magnifying glass to see 'em. These edges are not simple 90-degree cuts, but a series of steps. The more intricate the steps, the more nuanced the control over the power steering fluid flow.

As you can see, Ford's chassis engineers can fiddle with the T-bar and the porting troughs in the spool valve (along with a bunch of other stuff) to adjust the steering feel. You cannot. It takes far too many specialized, accurate fixtures and machine tools to cut and assemble a spool valve, so no shop is going to file a few grooves and make a magic spool valve.

What you can do is swap steering rack assemblies. From the advent of the Fox Mustang in 1979 until 2004, Ford made just a few major changes in the Mustang steering rack. Save for the steering input shaft, all Fox and SN-95 racks are direct bolt-in replacements for each other, for example. And that steering shaft difference can be accommodated easily enough with aftermarket parts, which we'll get to in a minute.

Chuck Schwynoch at Maximum Motorsport characterizes the Fox power steering rack as having a slightly notchy or on/off feel due to simple machining on the grooves in the spool valve. He prefers the SN-95 rack, which he finds has a more linear response.

Also worth noting are early Fox racks which were sourced from TRW. These are easily identified by their construction: aluminum castings at each end and a steel tube in between. After the TRW racks were phased out in the mid-'80s (there's no hard date for when TRW racks quit showing up), Ford built its own racks in-house. These all use a single aluminum casting.

Generally speaking, Chuck figures Ford paid more attention to the feedback the car gave the driver as the Fox/SN-95 chassis was in production longer, and therefore it's the later SN-95 cars that are preferred.

Chuck's top choice is the '00 Cobra R rack. Apparently some of the massaging these racks received at the factory was not suitable for mass production, but with just 300 Cobra Rs built, this wasn't a problem for Ford. What is a problem for us is that few Cobra R racks were made--just enough for the production run and a few service parts, and those have all been gobbled up. In fact, Maximum Motorsports bought the last 12 of these steering racks it could find and has put all of them into service. So, the '00 Cobra R rack is the one to have, but is unobtainable.

Using the same valving code as the '00 Cobra R rack but carrying a different Ford part number are the '99-'01 and '03-'04 Mustang Cobra racks. Maximum isn't sure if the valving is precisely the same as the Cobra R racks, but it's close. Definitely a desirable steering rack assembly.

If a Cobra rack isn't available, Maximum recommends the '02-'04 Mustang GT/Mach 1 rack. And if that proves impossible to find, the next choice is the '99-'01 Mustang GT/Bullitt assembly. We'll also note Maximum doesn't sell steering racks, save for the Flaming River manual rack assembly for those wanting manual steering.

At the risk of repeating ourselves too many times, you don't need to change steering racks on a plain old daily driver Mustang. Leave this trick for serious hobby and track cars.

For the majority of Mustang owners, the bang for the buck come with paying attention to the tie rods and outer tie-rod ends. Both inner and outer tie-rod ends wear, and replacement is the cure. Likewise, if you've lowered your Mustang, offset rack bushings may be useful, but a bumpsteer kit is likely an even better purchase.

Leaks are not a common problem with Mustang power steering racks, but sometimes the Teflon seals under the pump-to-rack line fittings need replacement (often because they were lost or damaged during rack maintenance).

The spool valve, rack, pinion, and input shafts appear bulletproof and should not require maintenance, but if someone has been banging curbs with the front end and the interals are out of whack, then the rack assembly should be replaced.

The rubber bellows at the end of the steering rack are important as they keep dirt out of the precision internals. We'd be suspect of a rack assembly with torn boots.

Power steering pumps are beyond the scope of this article, but if you have one that doesn't hiss like a mad cat, you're fine.

The bottom line: Fox drivers looking for increased precision should consider upgrading to a later SN-95 steering rack assembly and matching steering shaft, and everyone should keep ahead of tired tie-rod ends.

Horse Sense: Keep in mind the typical wear points in the Mustang steering are the inner and outer tie-rod ends. These are normal maintenance items at anything around 100,000 miles, and if your Mustang is wandering or has notchy steering, they are the first place to look.