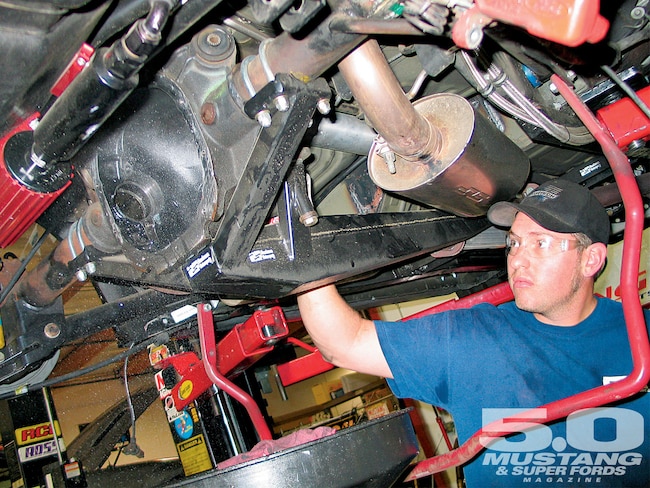 Horse Sense: While a 'Stangbanger's ultimate dream to have a super-modified car that remains absolutely perfect and free of bad noises forever, the truth is, horsepower and torque have a unique ability of finding the weak link in a Mustang. There's always a chance that a bad-noise-emitting problem could arise at some point, especially as more performance modifications are made.

Noises go hand-in-hand with the Mustang hobby. There are beautiful noises, such as the sounds that come from fine-tuned 'Stang engines at full scream on the chassis dyno or dragstrip. Then there are funny noises, like belt squeals, chassis creaks, dash rattles, and such. Finally, there are bad noises that are usually signs of serious problems with a Pony's engine or drivetrain, brought about by a lack of maintenance or an abundance of power.

Now before we go further with this report, we're not saying this to scare you or deter you from making moves that will put your Pony on the next plateau of performance. Rather, we encourage you to make those moves. As many of you know, making big steam is a favorite pastime for your tech editor and the crew at 5.0 Mustang & Super Fords. However, each time we increase the power output of the Ponies we work with, we're doing so with the understanding that we're taking the cars beyond the safe haven of stock. 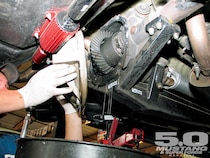 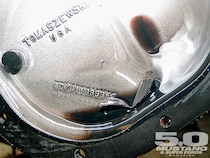 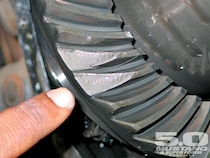 With that said, bad noises are inevitable when you push closer and closer to the edge of the high-performance envelope. We've heard the sounds of catastrophic failure a few times now. We also understand that when parts do fail and you start hearing bad noises, sometimes you just have to charge the bad fortune to the game, identify the problem, make necessary repairs, and move on.

That's what we're doing with this tech effort-getting to the bottom of a disturbing hollow-sounding, clunk-type noise that's coming from the 8.8 rearend in our '02 Mustang GT. We first encountered the racket immediately after making our final pass at a dragstrip test session. Clunking and a severe vibration in the drivetrain (that increased and decreased with wheel speed) made their presence known during our drive back to our pit. 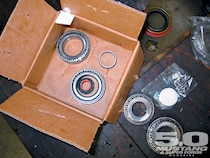 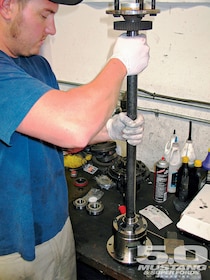 Right away, checks were made to isolate where the noise originated. After securing the 'Stang on four jackstands, we inspected the undercarriage to see if the noise actually was the result of the driveshaft making contact with the floorpan, torque arm or exhaust. After confirming that the shaft was OK, we checked out the differential (by engaging the transmission in First gear and turning the drivetrain) and found the noise was clearly coming from inside the 8.8.

As a general rule, if axles aren't broken and you're experiencing a bad noise from inside the 'Stang's rearend (but the car is still driveable, like ours), a broken ring or pinion gear, or a broken component in the differential usually is the source of the noise. With the malady requiring a more extensive investigation, we delivered the Mustang to GTR High Performance in Rancho Cucamonga, California, where technician Chris Balster found the source of our distressed diff's problem and performed the surgery that will make things right.

Photos of the search-and-rebuild process are telling, so we suggest you stay with this one and see what we've done to ward off future situations for our supercharged 'Stang's rearend. 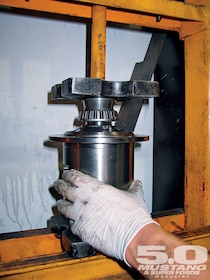 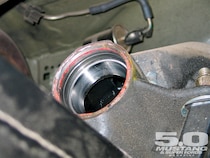 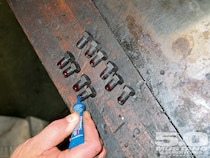 Truetrac VS. Locker Q&A
We've used a limited-slip Detroit Truetrac differential in our ProCharger F-1C-supercharged, '02 Mustang GT, and now have a freshly installed Detroit Locker in the 'Stang's 8.8 rearend. However, before we ever installed either unit, a lot of thought was put into the short- and long-term performance goals that we had for the project car. Remember-the car is street driven, and despite the array of race superchargers we have installed, our intent is to maintain good street manners and driveability.

This project has brought about several questions about Detroit's Truetrac and Locker differentials that we think many of you are asking. Here is a quick Q&A that hopefully will give you good insights about both units, and help you make the right selection for your Pony's rearend when it's time to upgrade.

Detroit Truetrac
Q: When does the Truetrac lock up?
A: The Truetrac is a helical-gear, limited-slip differential and never "locks up." The Truetrac operates by transferring power from the spinning wheel to the wheel with the most traction. If one tire breaks traction, the amount of rotation (or spin) is controlled. The torque is then sent to the other tire that still has traction.

Q: I use my car on the street and on the strip. Will the Truetrac hold up?
A: On the street, the operation of the Truetrac is transparent. You will not know it is there until you need it. In racing situations the unit will apply torque to both tires and consistently launch straight.

Q: How much horsepower and torque will the Truetrac take?
A: There are many factors to consider when determining if a specific differential will last in your 'Stang. Horsepower and torque are important factors. However, the weight of the car, tire height/width, the terrain, and suspension are all important things to take into consideration.

Detroit Locker
Q: When does a Detroit Locker lock?
A: The Detroit Locker is fully locked up when driving in a straight line or if the tires are spinning. The unit unlocks in a turn for the wheel that is turning the fastest.

Q: When I step on and off the gas pedal, I hear the unit make a clunking noise. Why?
A: Detroit Lockers have backlash between the drive and driven teeth, and you will hear clunking usually when going through corners and when going from drive to coast mode. Also, with the 'Stang on the ground and the transmission in neutral you will have 1/4 to 1/3 of a turn of lash in the driveshaft. This is completely normal.

Q: How much horsepower and torque will the Detroit Locker take?
A: There are many factors to consider when determining if a specific differential will last in your vehicle. Horsepower and torque are important factors. However, the weight of the car, tire height/width, the terrain and suspension are all important things to take into consideration. For example, a setup that uses street tires will live longer because both tires will break loose and spin before any real strain is put on the unit. But as the tire gets wider, the stress on the unit increases because the traction is greater.