Dale Amy
September 1, 2009
Meet the T-56 Magnum, Tremec's answer to the question of where to get a six-speed that will handle 700 lb-ft of torque. Since it uses TR-6060 internals, it's not only strong but slick-shifting too.

In the great pecking order of Mustang manual transmissions, six-speed gearboxes such as those factory installed in '03-'04 Cobras and current GT500s clearly rule the roost. While most of us had to get by with only five ratios, the New Edge Terminators used Tremec's familiar T-56 while the Shelbys get the same company's newer TR-6060, a stronger box that also sees OEM duty in the Dodge Viper, Corvette, Cadillac CTS-V, and other high-torque applications. Great news for the rest of us is that Tremec has finally released the long-awaited T-56 Magnum for the aftermarket-a box which basically combines a beefed-up T-56 case with the added strength of the latest-technology TR-6060 internals.

How much strength? The Magnum is conservatively claimed to have a 700-lb-ft torque capacity-about 60-percent higher than the rating of the original aftermarket T-56.

Though it looks much like any other T-56, one of the Magnum's many strength improvements comes from added beef in the front and rear bulkheads of the main case. Note the TKO-style tailhousing with the reversible shifter plate (though any Fox and Fox-4 applications are likely to use the rearmost position shown). A mechanical speedo pickup is provided on the left of the tailhousing, and an electric pickup on the right.

Showing great adaptability, the Magnum also has a TKO-style tailhousing fitted with a fully reversible, die-cast aluminum shifter, along with both mechanical and electronic speedometer pickups. Any resemblance to the TKO ends there, however, as the Magnum's shift characteristics are a good generation smoother and slicker than the notchy cogs of the older five-speed, or even the original T-56 for that matter. Tremec's marketing director, Nate Tovey, describes the Magnum's driveability as, "unlike anything the aftermarket has ever seen." The Magnum also addresses the T-56's troublesome speed-shifting issues through use of a new shift-fork design.

On the Mustang side, the initial run of Magnums will be just the ticket for Fox and Fox-4 applications right up till '04. A '05-and-up version will follow shortly, addressing the S197s unique shifter positioning requirements. Speaking of shifter positioning, if you have an older Ford Pony or musclecar on your project list, the Magnum's forward-most shifter mounting location (it has three) might help make it a thoroughly modern alternative to that old four-gear Top Loader or T-10.

Another obvious Magnum application is as an upgrade to the Terminator's original T-56, though the Magnum's slightly longer case will necessitate a minimally shortened driveshaft. It only comes with a 26-spline input shaft, so you may as well upgrade the clutch at the same time.

Check out our photos and captions for more details on this strong and smooth new six-pack. 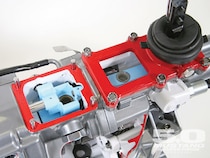 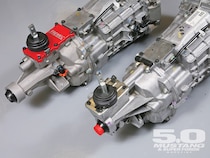 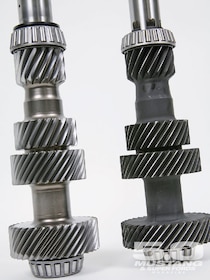