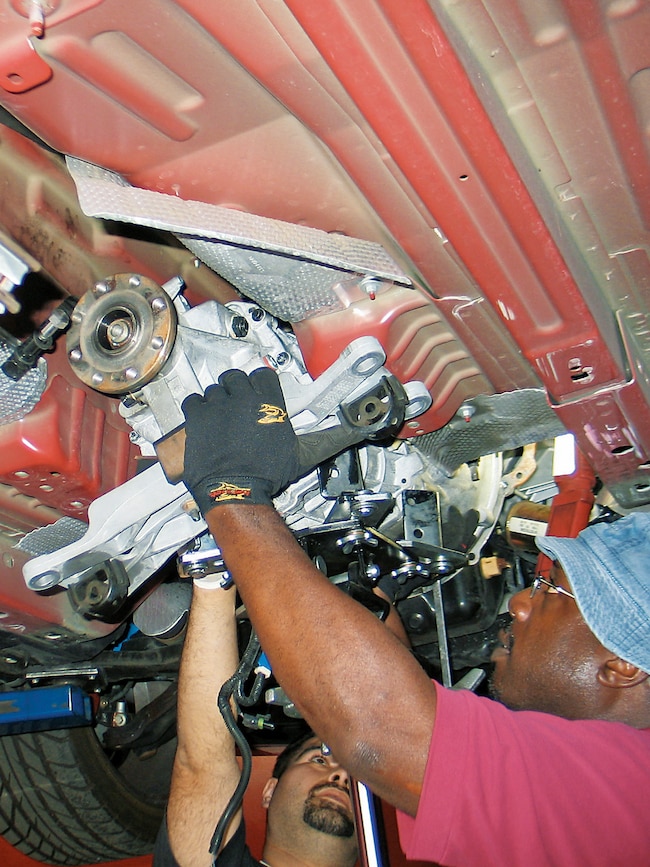 Horse Sense:
With its recent acquisition of McLeod Industries and Hurst Shifters, B&M Racing & Performance has covered all the bases for being recognized as one of the industry's leaders in high-performance transmissions and accessories.

As the S197 closes in on its third year of production, we sometimes find ourselves struggling to contain our excitement about the raging success the car has been thus far. It's amazing that despite our occasionally challenged economy, astronomical fuel prices, and the fear of a smogged-out planet, 'Stang enthusiasts remain steadfast in their loyalty, and members of the performance aftermarket continue to develop new products for S197s that we need to let you know about as soon as we hear about them.

Such is the case with McLeod Industries' RST clutch for the S197. While dual-disc clutch systems have been on the racing scene for quite a while now, RST Series is a new twin-disc setup designed for stick-shifted S197 'Stangs pushing upward of 900 hp thanks to superchargers, turbos, and nitrous oxide.

There's no disputing the ease of shifting that's experienced with a stock single-disc hydraulic clutch. But one of the downfalls of an '05-'07 'Stang's stock clutch is that it lacks the holding power necessary for handling the serious power and torque levels that enthusiasts are now producing with Three-Valve modulars. As horsepower and torque increase, a stock clutch doesn't have the ability to maintain that smoothness. Clutch chatter and slip eventually set in, and before you know it, your 'Stang's clutch is junk due to abnormal wear.

In the past, twin-disc clutch systems have gotten a bad rap as far as street compliance is concerned, mainly because this type of clutch is either on or off. There's basically no middle ground with a twin disc. Its direct engagement and release-as well as pedal pressure that requires the leg of King Kong-makes achieving acceptable drive-ability impossible.

McLeod has come to the rescue of enthusiasts who are fed up with losing performance due to OEM clutches that can't hang and eventually fail when a Pony packs a stronger punch. RST is a dual-disc clutch set featuring two 9111/416-inch, lightweight, organic discs and a floater ring that separates them-to eliminate rattling. Their compact size promotes superior grip that's double the torque capacity of a single-disc stocker and significantly lowers the moment of inertia for better acceleration. The reduction in overall mass makes the engine and tranny rev more quickly, which is a big plus for supercharged S197s with sticks.

McLeod's Red Roberts touts a stock-like clutch pedal as one of the other key qualities of the RST twin-disc, as well as its ability to be used with an OEM flywheel if desired. 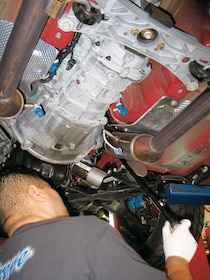 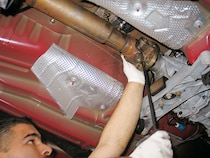 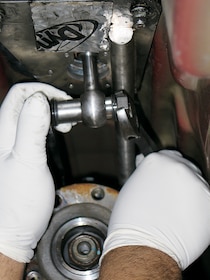 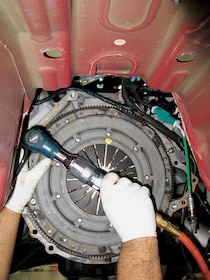 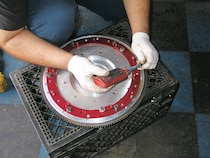 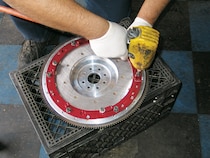 The idea of a dual-disc clutch that offers major clamping force and a clutch pedal that's easy to kick has intrigued us to the point where we need to see for ourselves whether or not it's possible.

Chris McCollum served up his Vortech S-Trim-blown, 400hp (380 lb-ft of torque)'05 Mustang GT for us to use as a test subject. Saul "The Surgeon" Gutierrez of Extreme Automotive in Canoga Park, California, went about making the clutch swap from bone-stock to McLeod's RST. Despite the addition of a second clutch disc and the floater-which we discovered is somewhat challenging to bolt down against the flywheel-the operation is textbook simple. Saul completed the job in about three hours.

Getting Shafted…in a Good Way
With the new lightweight clutch and flywheel installed, we figured adding a one-piece aluminum driveshaft by Coast Driveline & Gear of Ventura, California, would also be a great way to enhance the zing in our test ’Stang’s drivetrain.

Saul “The Surgeon” Gutierrez and Coast Driveline’s Mark Chuhaloff installed the driveshaft in no time, and after a few weeks of road testing, car-owner Chris McCollum reports that the new aluminum unit has been flawless. “I haven’t had any clearance issues with the floor or transmission tunnel, and the car revs up much quicker without any sign of vibration,” Chris says.