Slip an Overdrive Tranny into Your Classic Mustang (or Cougar), and Feel the Groove

Overdrive is nothing new. Before the high-winding, open-highway experiences of the ´60s, when 60 mph meant 2,800 rpm, we were decidedly efficient. There were three-speed transmissions with either electrically or manually triggered overdrive units that dropped the cruise rpm considerably.

Overdrive lowered the engine's final-drive rpm for less wear and tear, plus improved fuel economy. When the 23 cents-a-gallon excesses of the ´60s came along, we weren't concerned about those higher cruising revs. Then came OPEC in 1973-´74. Fuel prices doubled. So did gas lines and tempers. But we were still filling our tanks with foreign crude as quickly as they could pump it. Then came OPEC II in 1979. Gas lines again. Still-higher fuel prices. And a hard reality that would lead us back to Overdrive.

Beginning in 1983, Ford began installing five-speed manual transmissions in Mustangs. It was a mid-year option that changed the way we thought about cruising. At first, engine revs around 2,000 rpm at 60 mph felt funny. Ultimately, we adjusted to, and came to understand, the benefits of Overdrive. In Overdrive, newer Mustangs were achieving 20-25 mpg highway figures. With the advent of electronic fuel injection in 1986, 25-30 mpg from a V-8 Mustang was not uncommon.

In the early ´90s, owners of earlier Mustangs discovered the Borg-Warner T5 transmission's perfect fit for their vintage cars. With a conversion kit from California Pony Cars, the T5 slips right into a vintage Mustang over a weekend. Fit the five-speed gearbox in place and the shifter protrudes through a classic Mustang's shifter opening without cutting. When you get right down to it, a T5 swap is one of the easiest swaps you can accomplish with a classic Mustang. 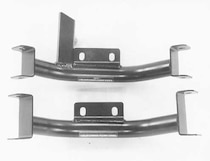 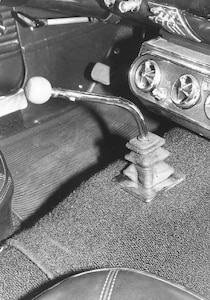