Make The Most Of Ford’s Toughest Automatic Transmission 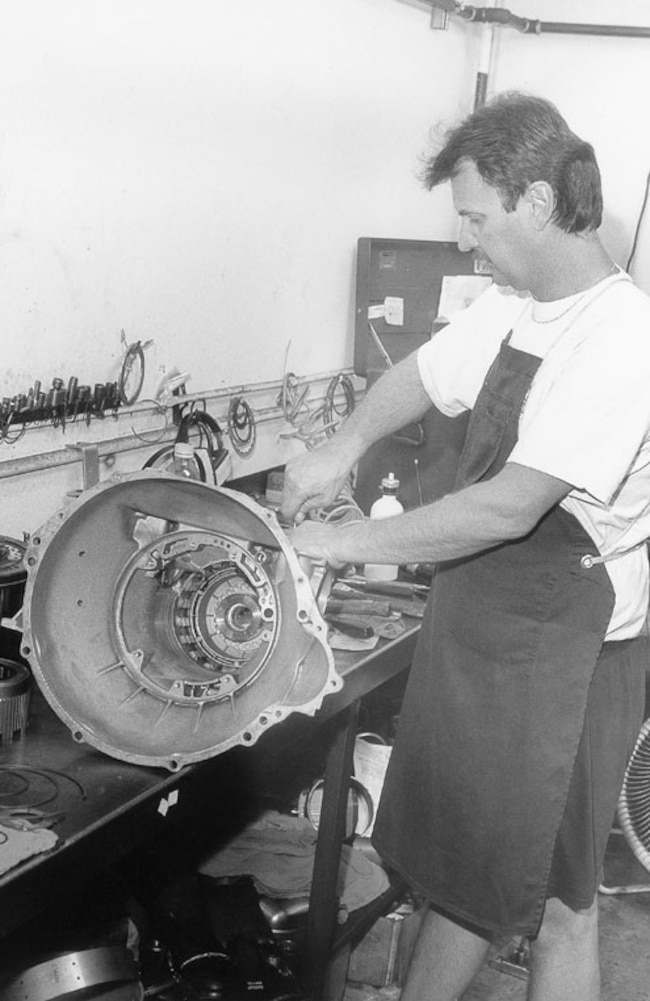 Aside from a complete transmission rebuild kit, we’re using the TransGo Performance Shift Kit in our C6. The TransGo kit firms up the shifts, which extends clutch and band life, and it quickly gets power to the driveshaft for better performance. 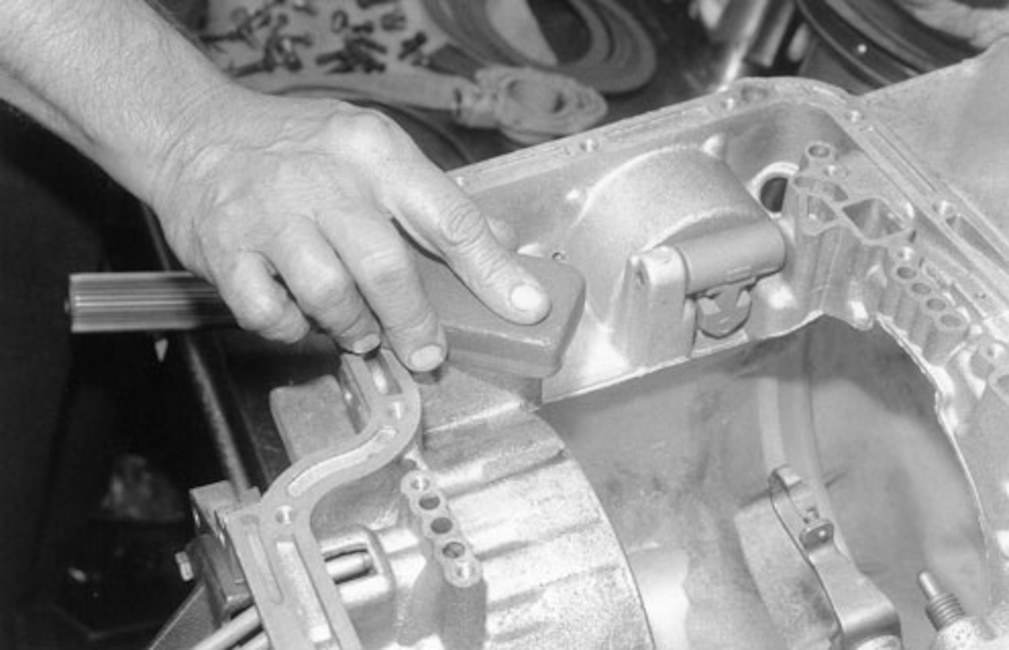 Premier Performance suggests working the gasket mating surfaces over with a friction block as shown, which trues the surface for better sealing. Remember to clean the case afterward to be sure all the metal shavings are removed. 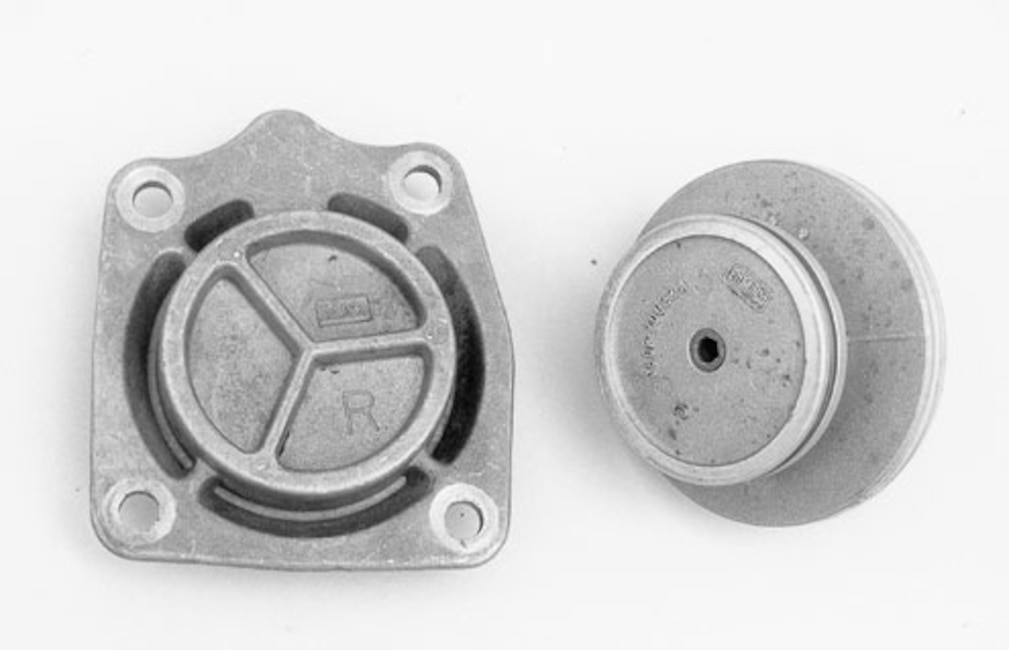 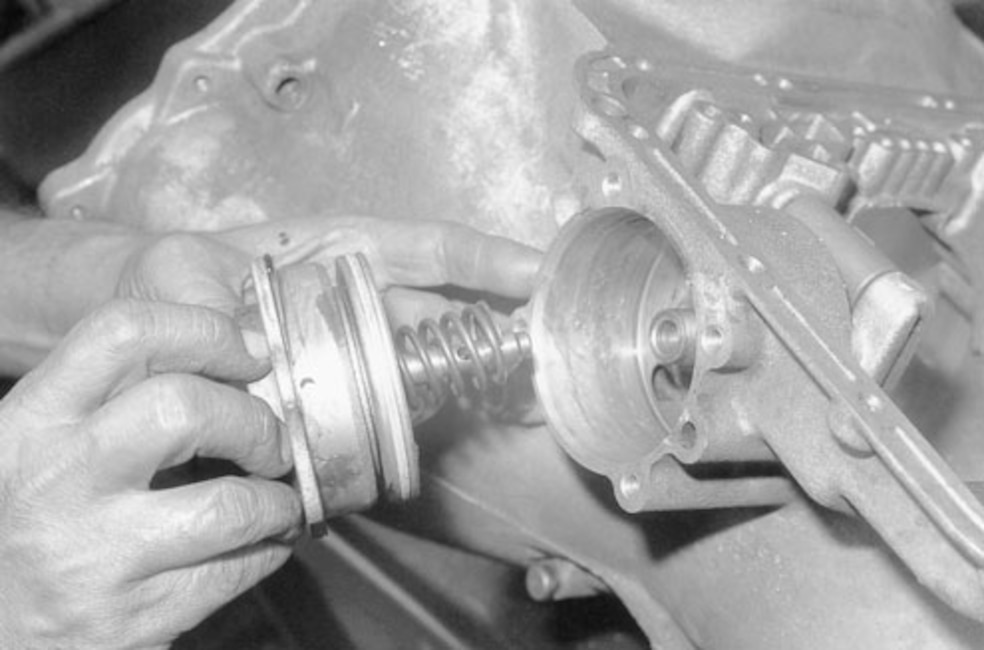 The intermediate servo installs as shown. 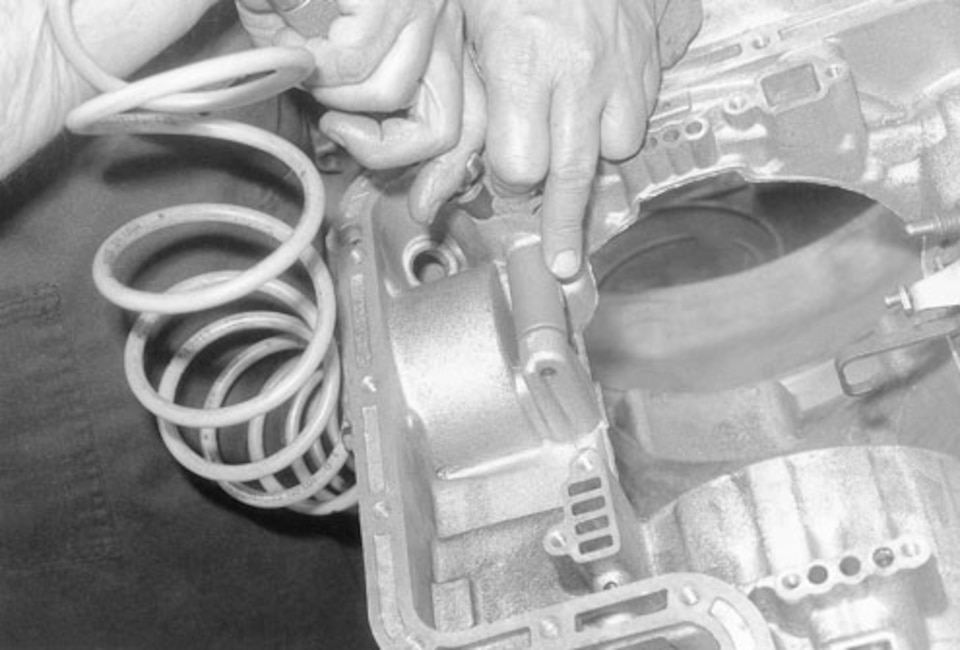 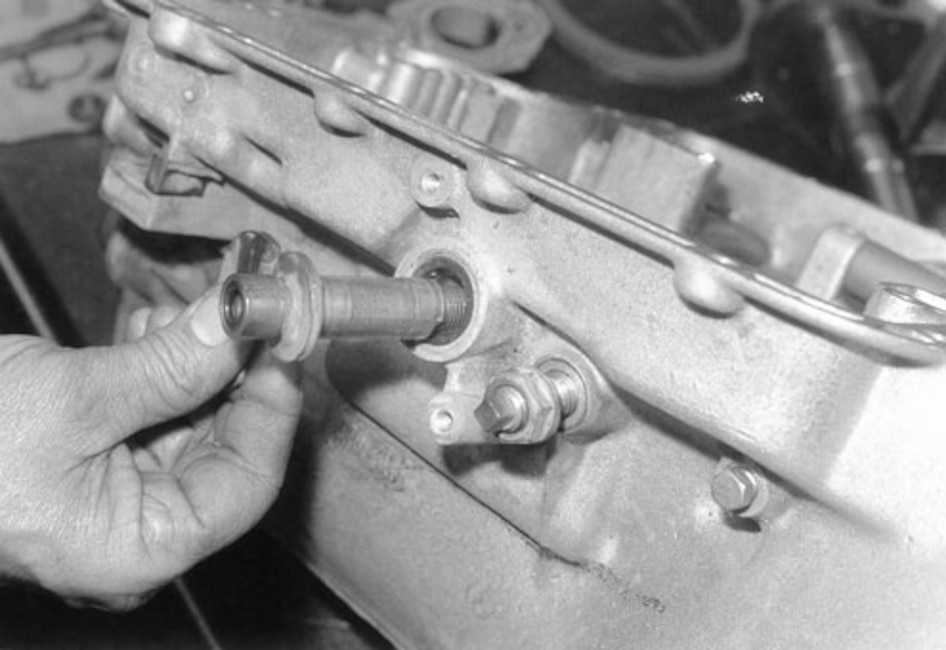 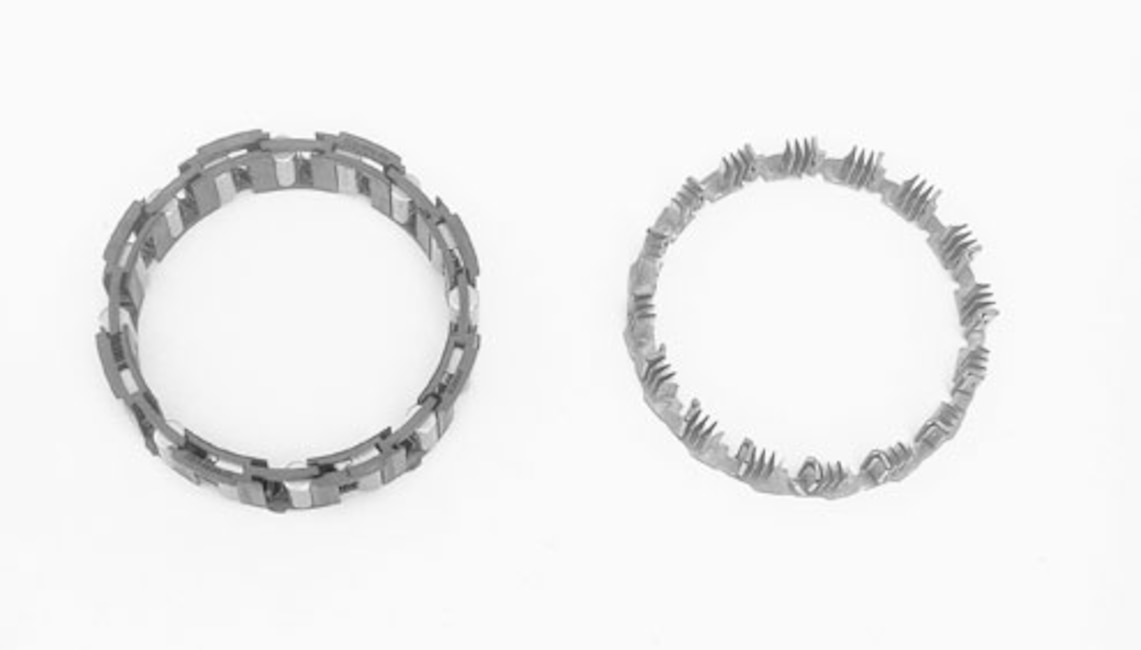 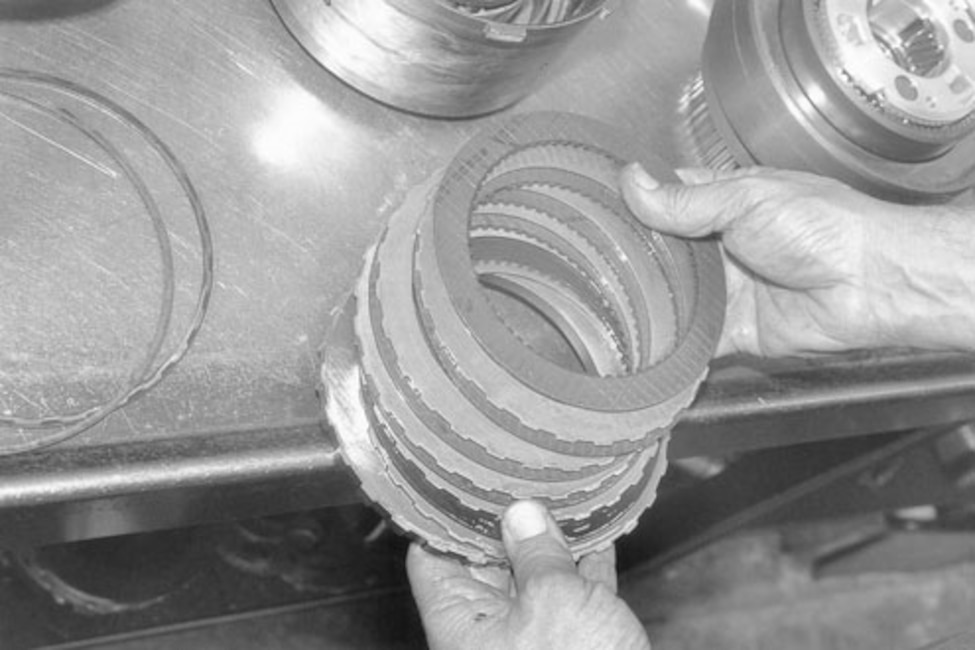 Low and reverse clutches alternate with each other as shown. 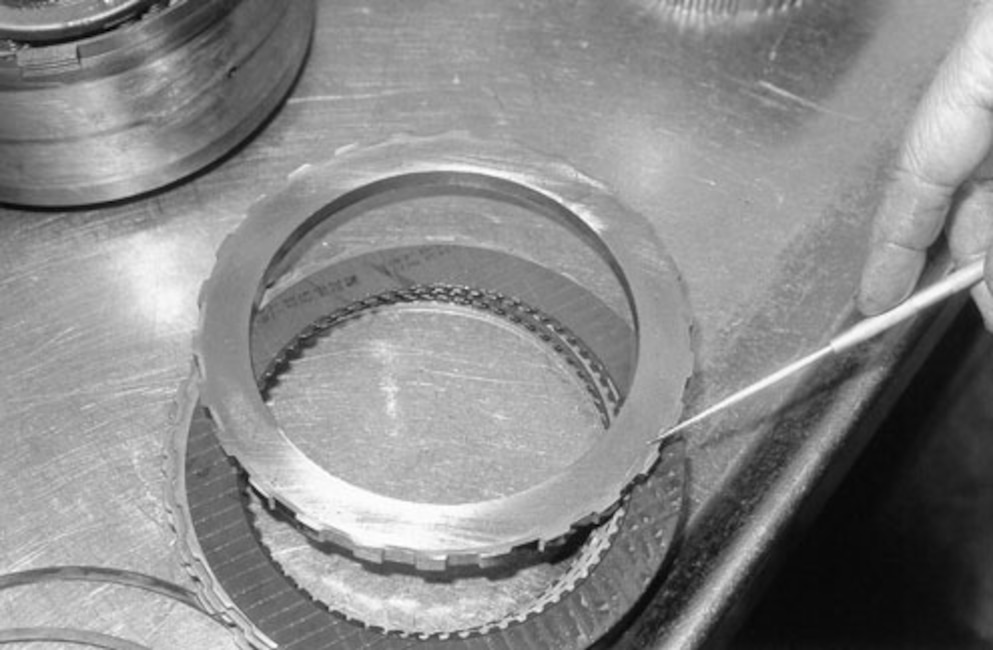 Clutch plates—also known as steels—should be scored with 600-grit sandpaper, for improved friction, and then cleaned with brake cleaner or laquer thinner to remove any grit. 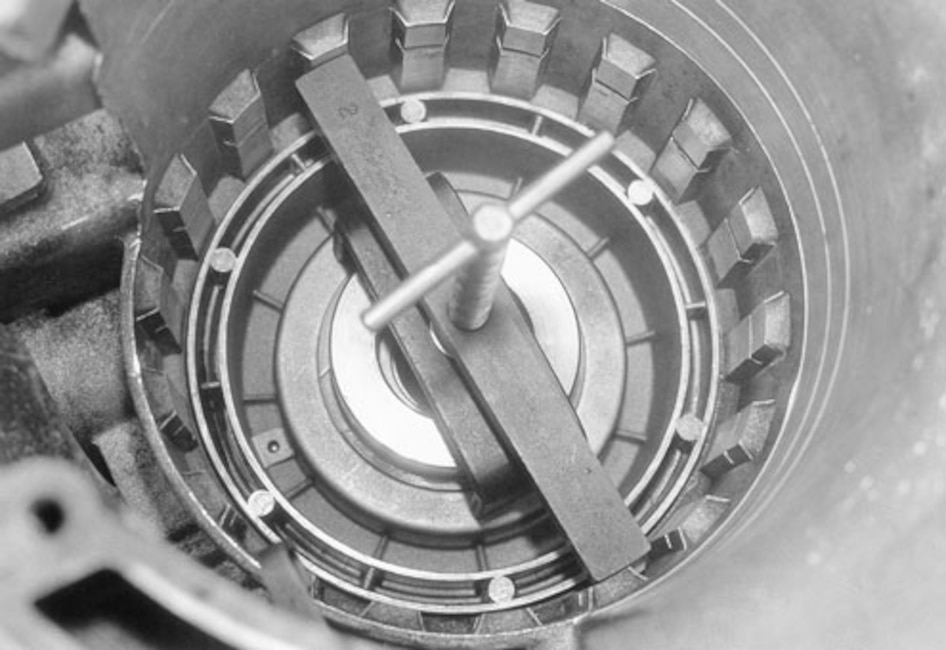 The low-reverse clutch spring assembly is installed first. Springs are compressed using a special tool (PN T65L-77515-A). Any tool supplier can order this one. 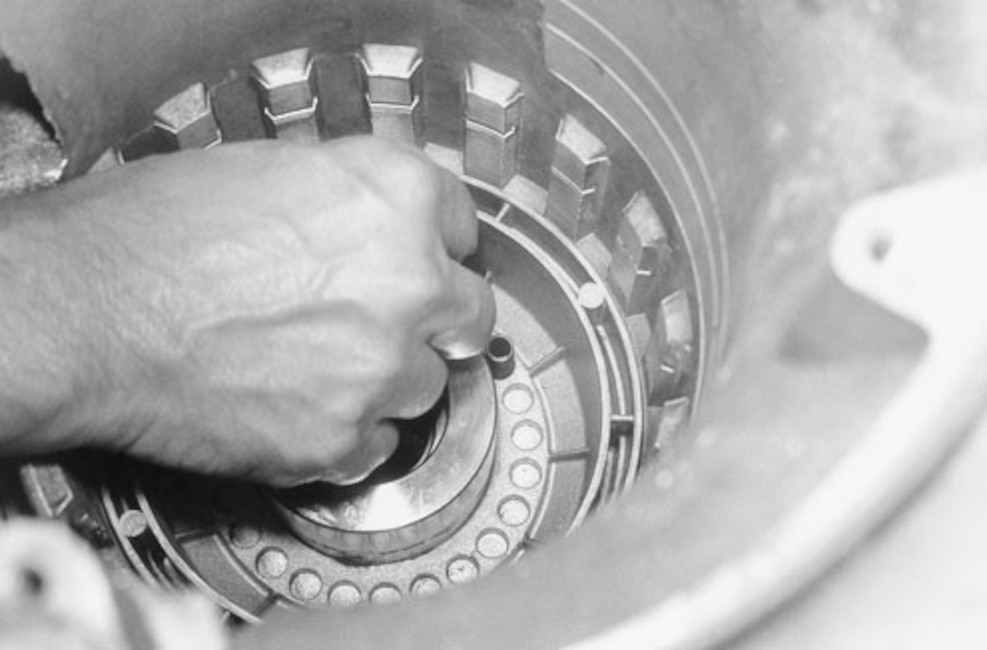 It is also an easy tool to fabricate yourself. It holds down the clutch springs for C-clip installation. 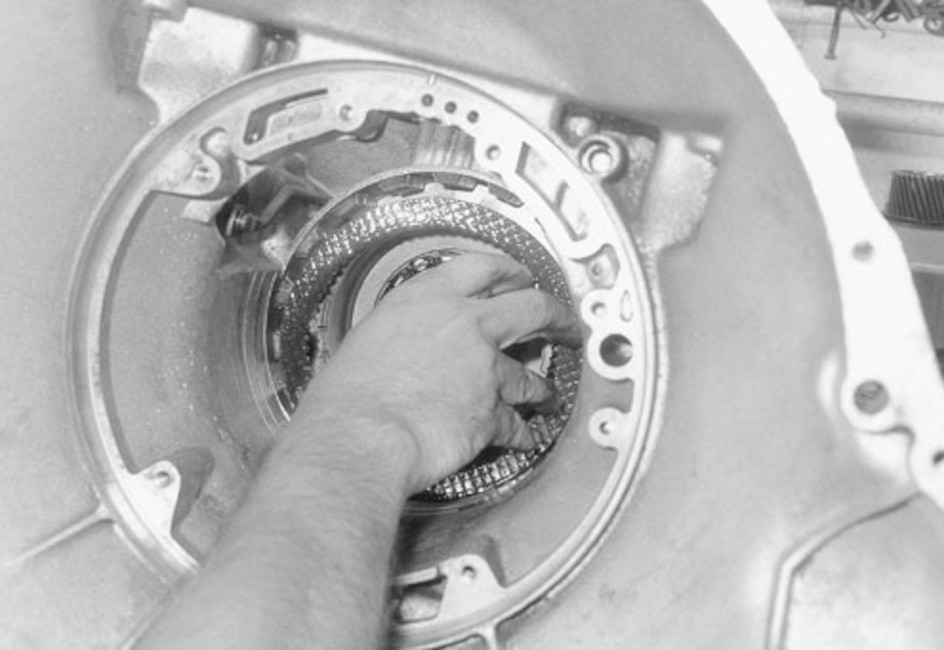 The roller clutch is next as shown. This allows the low-reverse drum to turn only in one direction. 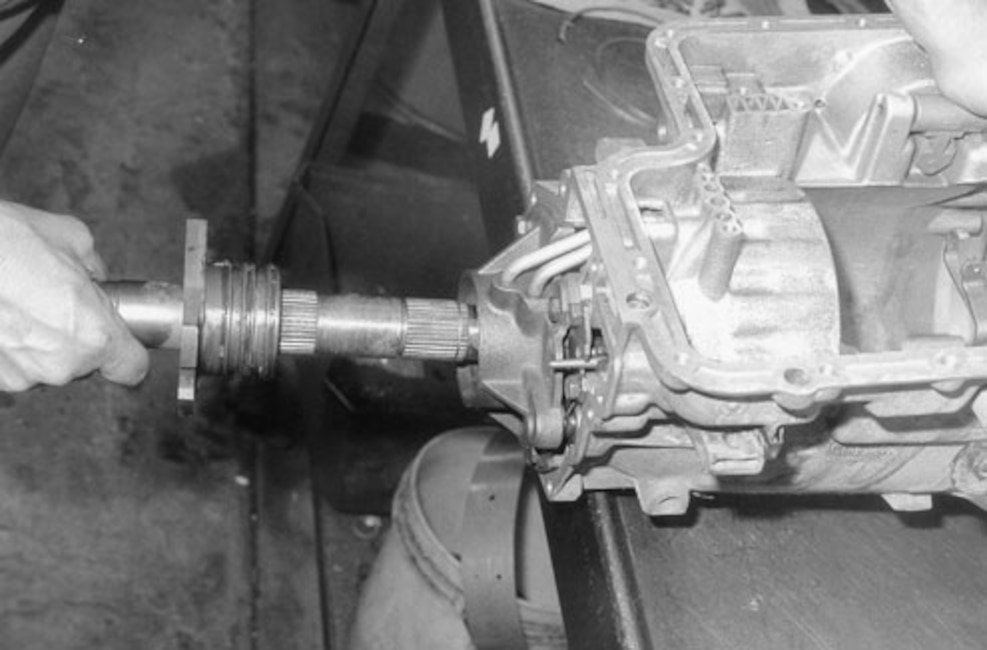 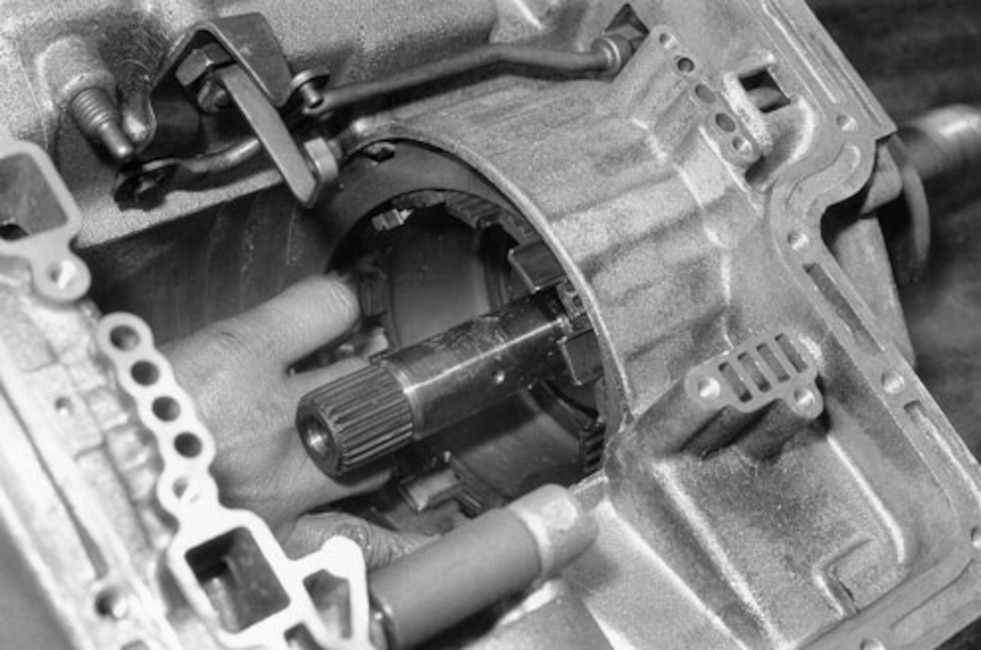 The reverse planet carrier and ring gear are next. 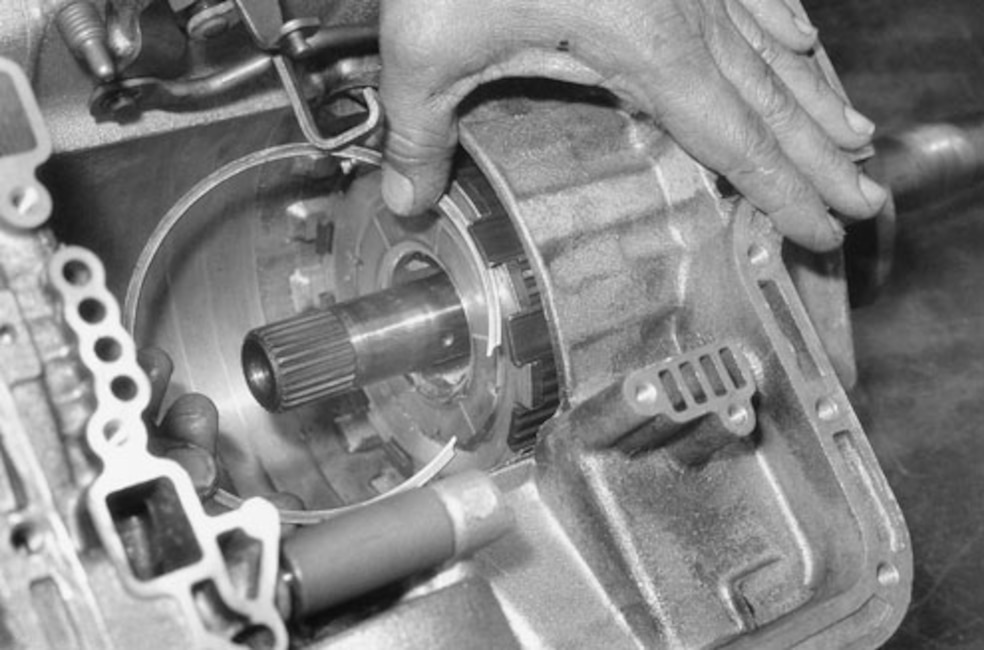 This snap ring retains the low-reverse clutch and planet package. 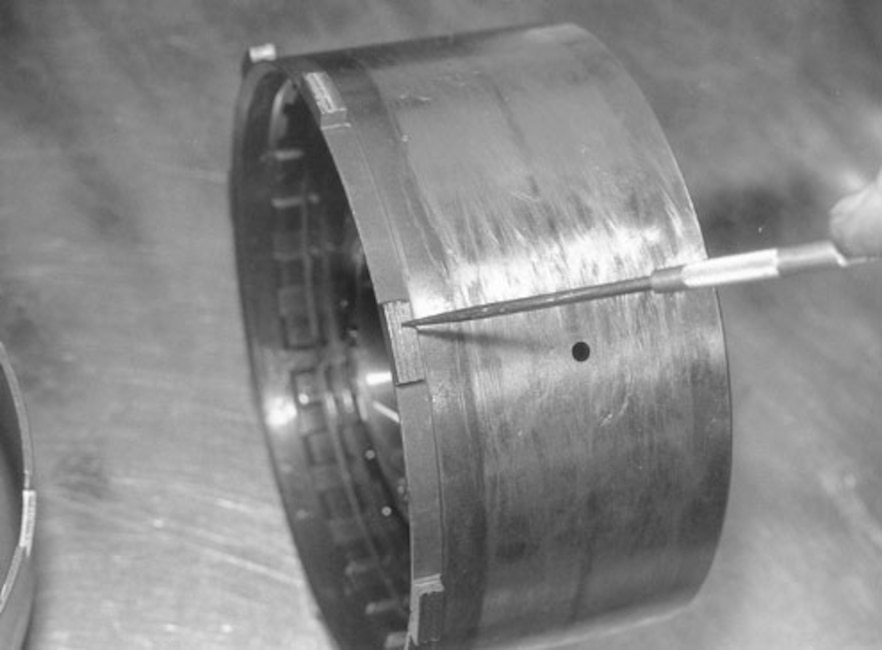 The reverse-high drum is next, which is already assembled with new clutch discs and resurfaced plates. This slips in place inside the case. Don’t forget to resurface the drum with 600-grit sandpaper, and then clean for improved band friction. 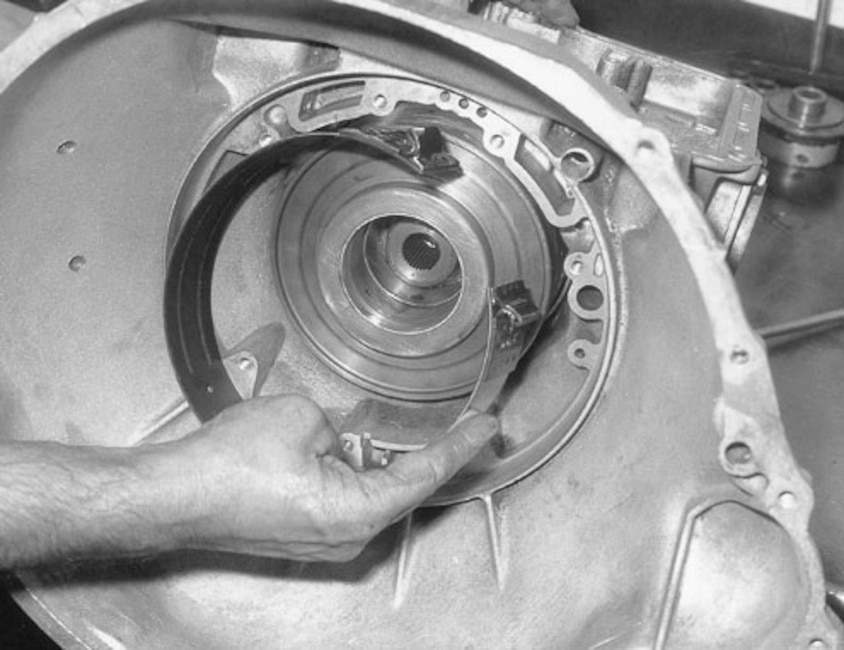 The intermediate band slips into place as shown with the ends toward the bottom of the case. 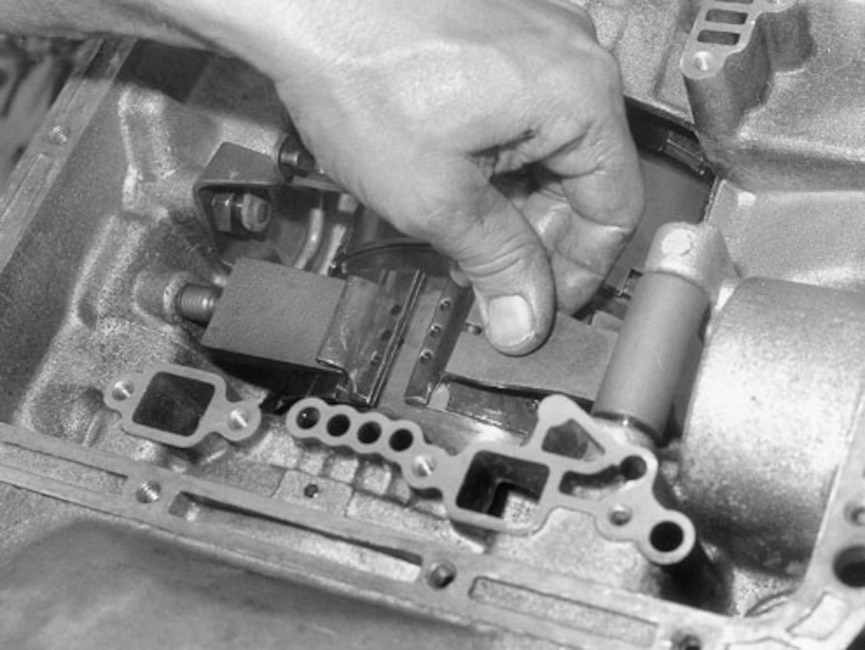 Next are both of the servo struts for the intermediate band. On the left is the band adjustment strut, and on the right is the servo strut being installed. 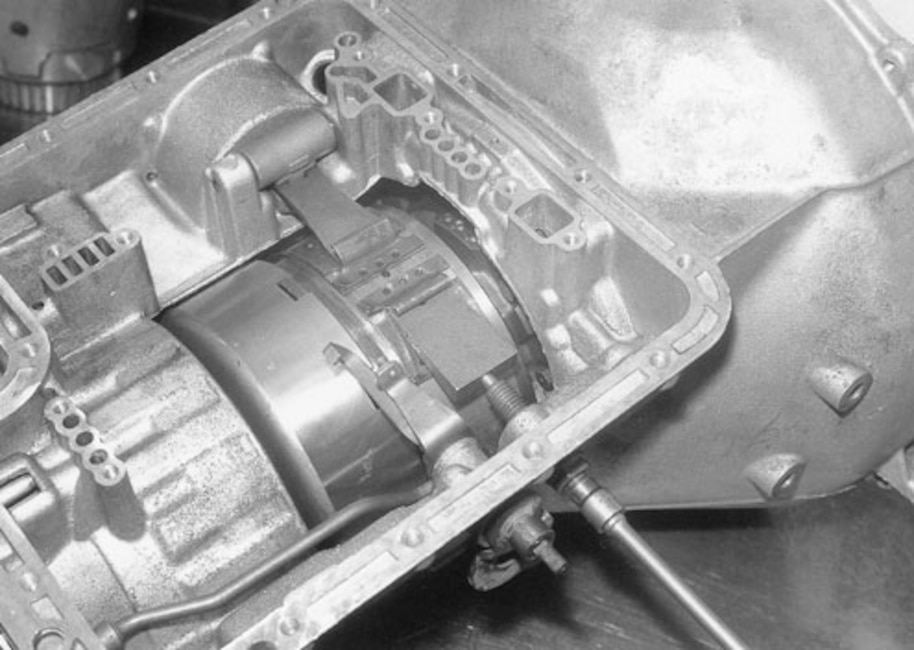 To adjust the intermediate band, torque the adjustment screw to 10 lb-ft, and then back the adjustment off 11/8 turns. Make sure you tighten the locknut. Front pump installation, which supplies lubrication and hydraulic pressure for transmission function, is next. Don’t forget the gasket. Torque the pump bolts to 28-40 lb-ft in a crisscross fashion. 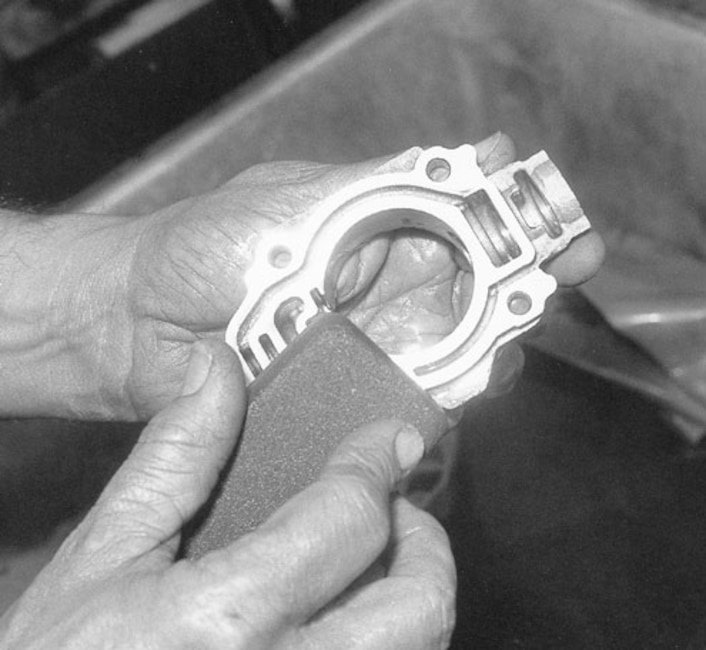 The governor assembly should be trued by milling, which ensures a leak-tight marriage with the output shaft. The governor functions are based on output shaft speed, which manages fluid pressure through the transmission’s valvebody based on vehicle speed. This is part of what determines upshift timing. 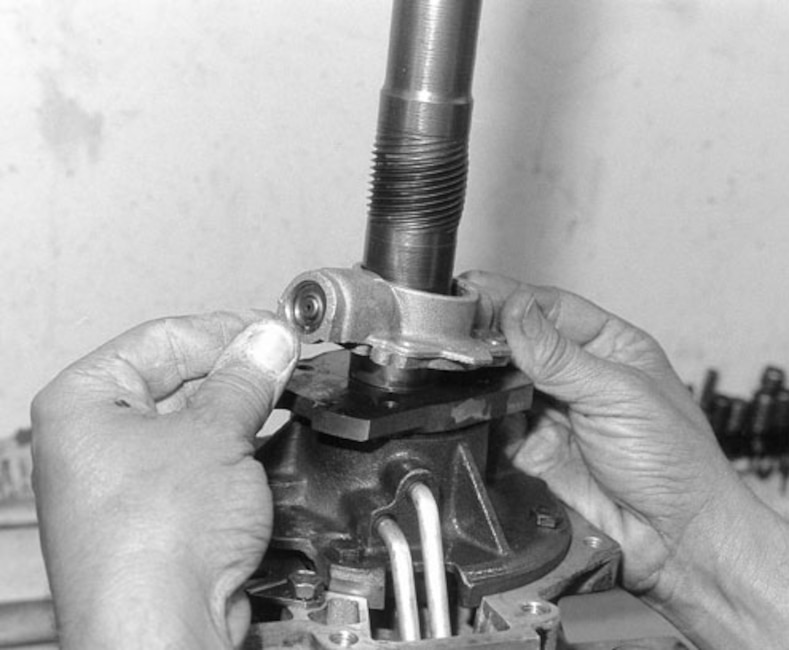 The governor is installed on the tailshaft as shown. Always check the governor piston for freedom of movement before installing. 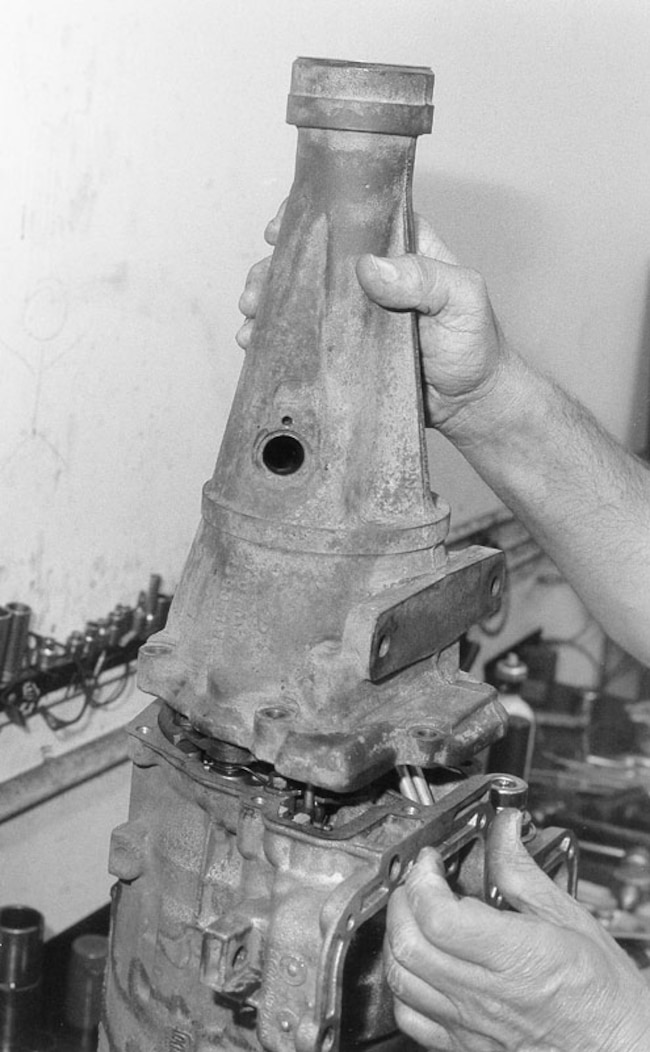 The tailshaft housing is next. Torque the housing bolts in a crisscross fashion. Don’t forget the gasket. 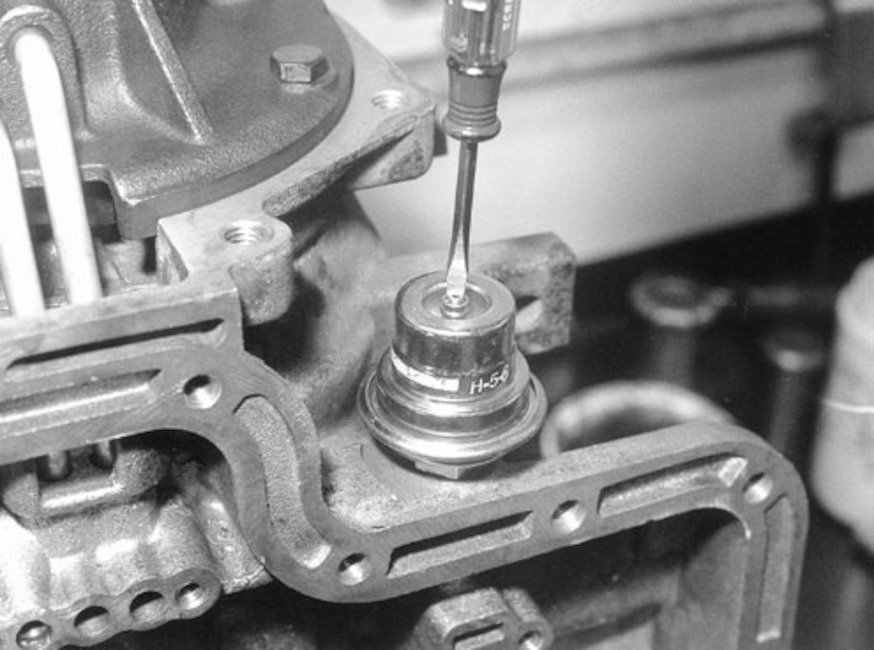 The vacuum modulator controls upshift, based on intake manifold vacuum when your foot is on the accelerator pedal. Ford calls this the primary throttle valve. This valve is adjustable, which determines upshift and downshift points.

The C6 Cruise-O-Matic transmission was born to meet the needs of high-torque Ford big-blocks. What makes this transmission such a tough competitor is engineering—a heavy-duty case stuffed full of rough and tumble components that can take extraordinary abuse. Although the C6 can handle just about anything an engine can dish out from the factory, there’s always room for improvement in restoration and performance applications.

We looked to the experts at Premier Performance in Huntington Beach, California, to handle our C6 performance needs. Our subject C6 is from a ’68 Shelby GT500 sporting 428 power. This means it has most of the right stuff for nearly any performance challenge an FE big-block can dish out. We’re going to show you how to take it a step further.