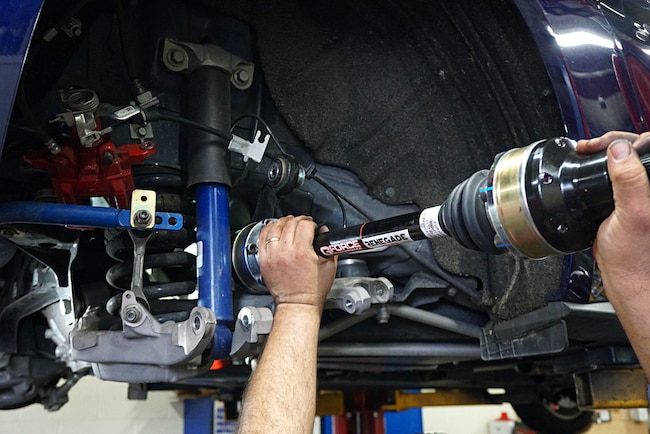 You’ve installed all the cool stuff like a supercharger, a big brake kit with six-piston brakes, aftermarket wheels, sticky tires and performance suspension pieces. But as with any build up, your vehicle is only as strong as its weakest link. In the case of our 2018 Mustang, that unfortunate description now fell to our factory driveshaft and axles, both of which were going to be hard pressed to deliver any form of long service due to the 600+ horsepower emanating from our 5.0-liter engine.

To help improve the durability of the driveshaft and axle systems, we headed once again to our qualified curator of Mustang enhancements, Sal Gutierrez, of Gear Driven Automotive for a simple yet essential upgrade of these two components. Gutierrez had recently completed the suspension and braking system upgrades on our Mustang so it seemed a natural progression to have him install the new GForce driveshaft and axles.

“A move to a stronger driveshaft is a good idea with engines over 600 horsepower from my experience,” noted Gutierrez. “There are certainly performance benefits to a single, lightweight driveshaft. The factory driveshaft is a two-piece shaft system with the Constant Velocity (CV) joint in the middle. It is this joint that is the biggest problem when used in a big horsepower application.”

Continued Gutierrez, “With regards to the axles, the GForce axles have a lot of advanced technology in the CV joint area and are beefier than the stock – all you have to do is look at them and you know they are far stronger than the factory counterpart. I’ve made the mistake of not upgrading to a performance axle and wished I had in the end.”

The GForce one-piece aluminum driveshaft we selected weighed in at 17 pounds, a full seventeen pounds lighter than the factory unit, and is rated to handle up to 900 engine horsepower and speeds of 160 mph. With a solid core, heavy duty U-Joints at both ends, you have a highly durable component. The new GForce driveshaft is 3.5-inches in diameter, meaning it is a direct replacement for the factory driveshaft with no vehicle modifications required.

As with all Ford Mustangs built since 2015, the independent rearend is a strong and versatile part of the S550 platform. Modern axles systems utilize CV joints to allow the rear wheels to act independently rather than the standard solid rearend used in Mustangs prior to 2015 (with the exception of some earlier Cobra SVT models). Because of this design, there are some weaknesses when big power is sent rearward. The GForce axles include severe duty CV joints, axles created with aircraft-grade alloys and one-piece, black e-coated inner and outer stubs. Powdercoated to protect against corrosion, they will retain their look for many years.

Machined from proprietary aerospace billet alloy, according to GForce, their Renegade axles are for modified cars with everything from mild performance upgrades to those with assorted power adder system that push the power way up. Featuring an upgraded 31-spline bar and 31-spline billet machined CV joints, they offer a huge improvement over the factory offering. In the case of our Vortech supercharged 2018 Mustang, they were the perfect step up axle.

The total change over from factory driveshaft and axles to the GForce components took about two hours total, of course we completed the job on a lift for ease of photography; we completed this simple swap with no real challenges. Follow along as we demonstrate the key element to this conversion that anyone with a modified vehicle should consider.