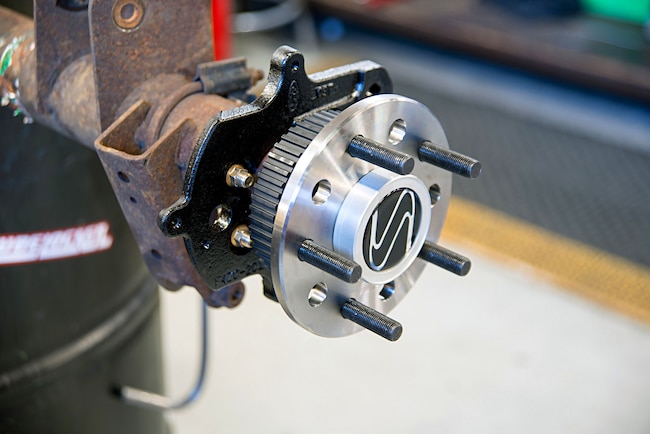 Remember when the only rearend for any serious project was a Ford 9-inch? Introduced in the late 1950’s, Ford’s bulletproof rear axle was tucked under everything from trucks to T-buckets for two good reasons: brute strength and aftermarket support. In 1986, V8 Mustangs gained a new, updated axle featuring a slightly smaller 8.8-inch ring gear. Over time, the aftermarket embraced the new 8.8 axle for it’s widespread availability, excellent strength, updated design, and high efficiency. The venerable 8.8’s architecture continues today under every Mustang rolling off the assembly line. Now all but the wildest quarter-mile monster Mustangs trust an 8.8 axle to spin the slicks.

When Strange Engineering’s JC Cascio decided to tackle a 1997 Mustang project, he faced a decision: keep the 8.8, or go bigger. Even with a shop full of the toughest 9-inch goodies money can buy, Cascio chose the former and fortified the Mustang’s 8.8 axle. After all, an 8.8 bolts right in and can handle just about anything a motor will throw at it.

The Strange 31-spline axles match the stock length for 1994-1998 Mustangs, and are precision-machined from modified 1550 premium steel in the United States. The flanges include provisions for both screw-in and press-in studs.

Strange’s HD 1350 Series pinion yoke is cast in nodular iron and features additional material in critical areas for increased strength. The yoke accepts an oversized 1350-series universal joint. If Cascio breaks one of these, he’s got other problems.

Follow along as we see how the folks at Strange Engineering rebuilt their 1997 Mustang’s 8.8 rearend.

1. One of the few weak points in the Ford 8.8 rear end is the factory 28-spline axle interface. Fortunately, Strange Engineering’s 31-spline axle is an easy upgrade.

2. Strange’s PN 3110 axles not only are the required length for 1994-1998 Mustangs, they are precision-machined from modified 1550 premium steel in the United States. The majority of the machining is performed prior to heat treat to keep the hardness consistent where it counts.

3. The Strange 31 spline axles are machined after heat treat in critical areas to maintain a precision finish on the bearing and seal surfaces for long life, strength, and to prevent leaks.

4. The Strange axle flanges include provisions for both screw-in and press-in studs.

6. Strange’s JC Cascio chose a 3.73:1 gear set from Motive Gear to give their 1997 Mustang more grunt off the line and less RPM drop between shifts.

8. To match the 31-spline axles, Cascio opted for a stout 31-spline Traction-LOK differential from Eaton.

9. To top off the installation, the Strange crew grabbed a couple bottles of fresh Lucas Oil 85W-140 gear oil and Ford friction modifier.

10. After gutting and cleaning the 8.8 rear end from their 1997 Mustang, they pressed the pinion bearing on the gear and installed it into the housing. (Note: the steel drum rimmed with a rubber hose that acts as both a support fixture and a drain pan for axle rebuilds.)

11. Next, they installed the Strange HD 1350 pinion yoke. This hefty piece isn’t only stronger than the OEM flange, it accepts an oversize 1350 universal joint for maximum strength.

12. Next, they pressed the ring gear and bearings on the differential, and slid it into the housing.

14. With the rear gears set up, the axles were installed next. They were careful not to damage the seals with the splines during installation.

15. Using both hands, they pointed the ends of the axles upward so they engaged the splines of the differential. Note that the screw-in studs are installed.

16. Next, they installed the C-clips on the ends of the axles using a magnet. With everything buttoned up, they poured in the friction modifier and gear oil.