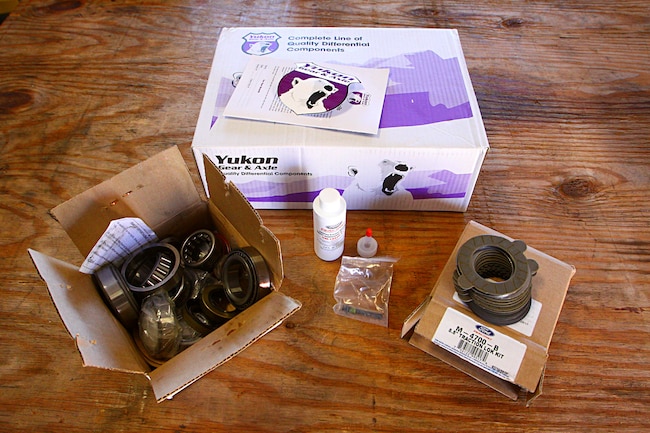 Gear swaps have been a mainstay in the performance market for years. Many a company owes its start by making ring and pinions designed to either improve acceleration or top end speed. After all, those are the two main reasons we do a gear swap. We either want quicker acceleration, or increased top end speed, and most of the time, a single gear swap doesn’t give us both.

In the Fox days, installing 3.55s, 3.73s, 4.10s, or even 4.56s came online the same time as big ‘n littles, exhaust, and a shifter. When most Fox Mustangs came from the factory with 2.73s or 3.08s, we had to do something to get that pushrod engine into its powerband quicker, and a gear swap was the answer.

The same took place when the SN95, New Edge, and S197 Mustangs hit the streets. The Two-, Three- and Four-Valve modular engines lacked bottom end torque, and needed gears to help them get out of the gate, as well. The modular engines didn’t have a lot of torque down low, so it was more of the same.

However, when the 2003-’04 Cobra hit the streets with an Eaton supercharger, that power made a gear swap, perhaps, less important. Furthermore, with the Coyote engine, mixed with current transmission options, gear swaps aren’t as important today. Power adders certainly make up for a lack of torque, as well as, transmission gear ratios in the Getrag MT-82, Tremec TR-6060, and the 6R80 and 10R80 automatics. The power adders make up for any engine torque shortcomings, while transmission gear ratios help keep the engine in its powerband.

For our 2001 Bullitt, Shrader Performance put together a nice little Two-Valve engine, but the car was saddled with the factory 3.27 gear. We needed a higher-numerically gear to help take advantage of our Bullitt’s Shrader Performance powerplant. Since we use the Bullitt as a daily car, 4.10s were a bit much for our tastes, so we settled on a 3.73 gear. Also, our Bullitt will probably never see the drag strip, so we didn’t need a double-throwdown differential or axles. We just wanted to freshen up the components in our car’s 8.8, so we called up Summit Racing for Yukon Gear 3.73s (Part number YGA-24096; $249.45), a Ford Performance Traction Lok rebuild kit (Part number FMS-M-4700-B; $73.97, and a Ratech Deluxe Kit (Part Number RAT-3008K; $108.97).

Responsible for performing the gear swap is Dave Piercey’s Mustang Performance, located just north of Tampa, Florida. Dave is the guy to go to in the area for gear swaps, and we’ve worked with him countless times on various Mustang projects. Dave was the perfect guy for the job.

Follow along as we improve the acceleration of our Bullitt.

1. For our 2001 Bullitt, we wanted to do more of a budget rearend build. We don’t drag race the car at all. It serves as a daily driver so we didn’t need a double throw down pair of axles or differential. We just needed gears to spruce up acceleration, new bearings, and a rebuilt Traction Lok differential. Our Bullitt has over 240,000 miles on it, so we think the 8.8 was due for a rebuild. We gave Summit Racing a call for Yukon Gear 3.73s, a Ford Performance Parts Traction Lok rebuild kit, and a Ratech ring and pinion installation kit. The Yukon 3.73 gears would enable our Bullitt to accelerate at a more rapid pace compared to the stock 3.27s, the Traction Lok rebuild kit would once again allow the car to leave two black marks instead of just one, and the Ratech ring and pinion installation kit would ensure our Bullitt will last another 240,000 miles.

2. Dave starts the rebuild by loosening the rear brake calipers and suspending them out of the way, and removing the rear brake discs. He then turns his attention to draining the rearend lube from the stock 8.8; he removed all but the top bolt to make it easier to drain.

3. Dave removes the stock differential pinion shaft to gain access to the C-clips, which will be removed to enable the removal of the rear axles.

4. While removing both axles Dave uses the end of each axle to remove the seal on each side.

5. To get to the meat and potatoes of the install, Dave removes the bearing caps on each side of the differential. Removing the caps allows Dave to extract the differential from the rearend housing.

6. With the axles and differential removed, here’s the view you are left with. The pinion, pinion nut, and the rear axle u-joint flange. Here, Dave is using a puller to dislodge the u-joint flange from the pinion.

7. This is when we started to have a little “fun” during the installation. After 240,000 miles, the factory pinion decided it didn’t want to come out of the housing. Usually, a few swift hits with a good-size hammer will convince it to come loose, but in this time. We used a huge sledgehammer, and still nothing. We sprayed PB Blaster on the pinion and let it sit overnight. The next morning, Dave gave it a few smacks with the sledgehammer and the pinion finally came out.

9. Dave uses his press to install the new bearings onto our existing differential housing. The Ford Performance Parts Traction Lok rebuild kit components are soaked in 85W140 gear oil prior to installing them into the housing. The rebuild kit comes with new clutch packs, shims, differential pin lock bolt, and a bottle of Friction Modifier. As for the spider gear shims, our differential had .025-inch shims in it, but Dave used .040-inch shims to back in it.

10. With the clutch packs and shims installed in the housing, Dave places the larger spider gears. To install the smaller spider gears, simply roll them into place by meshing the gears together until all of them are centered for the axles and differential pin. The S spring is installed using a few hits with a small hammer. Dave then places the differential pin in place to make sure everything is properly lined up.

12. Dave uses an Ottawa Tool Company (OTC) barrel gauge to set pinion depth, and to find the proper shim to use for the final installation. Using the barrel gauge, Dave arrived at a .026-inch shim.

13. Dave uses an impact to install the pinion into the 8.8 housing until all the play is gone. Since we’re using all new bearings, Dave tightens the pinion nut until he sees 30-35 in/lbs. With an old pinion bearing, Dave recommends tightening the pinion nut to 10 in/lbs.

14. Dave installs and torques the rebuilt Traction Lok differential into our housing, setting the backlash at .008-inch.

17. Prep the rear differential cover by applying silicone to the mounting surface. Dave applies a bead of silicone around the cover, and then uses his finger spread it around the bolt holes. Once the silicone sets up, Dave uses a small air ratchet to install the cover.

18. The fill hole on the 8.8 is on the front side of the housing; it uses a threaded plug with a 3/8-in ratchet head, which we had to clean since there’s a magnet in it. We used Valvoline fluid with the Ford Performance gear additive. Once the fluid starts coming out of the fill hole, you’re good. When you reach that level, reinstall the threaded plug with a 3/8-in ratchet with an extension, reattach the driveshaft and brakes, and you’re ready to go.