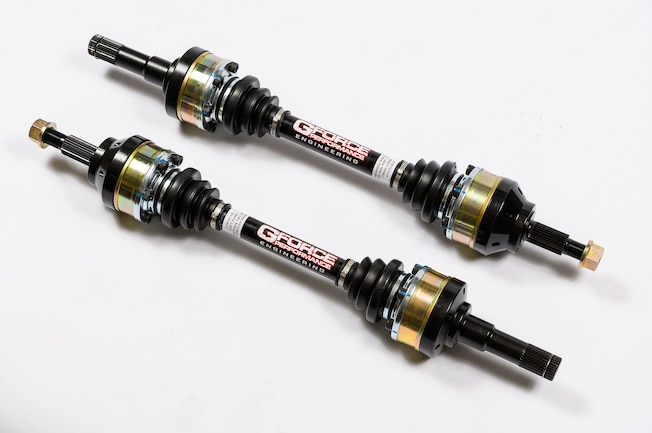 After Ford introduced the 1999 Cobra with the Mustang’s first independent rear suspension (IRS), enthusiasts quickly learned that the factory-issued axleshafts were a weak link. When drag racers connected those axles to slicks, they snapped like toothpicks. One of the benefits of Ford’s 2000 Cobra R program was beefier 31-spline axles (up from 28-spline units). Fortunately, these axles made their way to the 2003-2004 Cobras.

It wasn’t long before 2003-2004 Terminator Cobras started bringing 1,000 hp to the dragstrip, which rapidly overwhelmed the beefier axles. The quick solution to rear suspension fragility was a swap to a tried-and-true solid live axle.

Over time, however, racers learned how to make the IRS work, and work well. A piece of the puzzle was stronger axleshafts. That’s where GForce Engineering comes in.

It’s clear that GForce didn’t cut corners when designing these axles. For maximum strength, the one-piece inner and outer stubs of the axles are CNC-machined from a solid, billet steel alloy. Each stub bolts to a billet constant velocity (CV) joint that accepts upgraded 31-spline axle bars machined from a proprietary, aerospace billet alloy. The axles also feature GForce’s anti-wheelhop technology, which includes a right-side axle bar that’s slightly larger (stiffer) than the left. All parts are coated for long-lasting good looks and are designed and assembled in GForce’s Wichita facility. To ensure that these are the last axles you will ever buy, GForce offers a limited lifetime warranty.

Take a look as we install GForce’s axles in a 2003 Mustang Cobra.

01. A unique feature of the GForce axles is one-piece, billet steel alloy inner and outer stubs. If you break these you are doing something wrong. The stubs are e-coated to prevent corrosion.

02. The axles also feature GForce’s anti-wheelhop technology, which includes a right-side axle bar 0.064 inch larger than the left. This creates a stiffness differential between the sides that helps cancel out axle windup shudder or wheelhop.

04. With the car up on jackstands, we set the parking brake and removed the OEM hub nut.

05. We removed the rear brake caliper and rotor.

06. With the control arm supported by a jackstand, we removed the lower shock mounting bolt.

07. Then we disconnected the outer tie-rod end.

08. For a bit of extra working room we disconnected the rear sway bar endlink.

09. The upper control arm pivot bolt is used to set the rear camber, so we marked the position of the eccentric before removing the bolt.

10. Then we removed the rear ABS sensor.

11. Using a pry bar, we popped the inner CV joint stub out of the differential.

12. Then we removed the lower control arm pivot bolt.

13. Using extreme care not to drag the splines across the differential seals, we removed the right CV axle and hub from the car. We repeated the process for the left side.

14. Using a tool borrowed from an auto parts store, we pulled the hub off of the OEM axle.

16. We transferred the ABS rings from the OEM axles to the GForce axles.

17. With the inner stubs coated with gear oil to avoid damaging the seals, we carefully slid the axles into each side of the differential.

18. We coated the splines and hub nut with antiseize compound.

19. Using a 32mm socket, we used the hub nut to pull the axle stub into the hub. (Final tightening came later.)

20. After we loosely reinstalled all the bolts into the rear knuckle, we used our mark to orient the upper control arm pivot bolt. We torqued the upper and lower bolts to 65 and 85 lb-ft, respectively.

21. After reinstalling the lower shock mount bolt and torqueing it to 98 lb-ft, we reattached and tightened the tie rod end nut to 65 lb-ft.

22. With all the bolts torqued properly, we reinstalled the rear brake rotor and caliper.

23. Using the parking brake to keep the hub from spinning, we torqued the rear hub nut to 240 lb-ft.

24. After the GForce Engineering Outlaw 1000 HP axles were installed, our Cobra put the power to the ground more directly and smoothly—bot only when breaking traction but also when sidestepping the clutch. Success!