Put a Five-Speed in a Big-Block Mustang 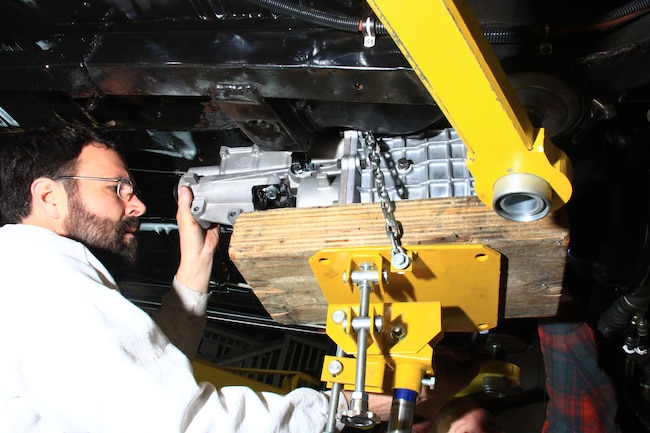 Bruce Couture of Modern Driveline (MDL) invited us to his Caldwell, Idaho facility for a look at their latest innovation—the MDL “Low-Profile” TKO five-speed transmission for 1967-1973 small-block, 385-Series big-block, and FE-Series big-block Mustangs. What makes the “Low-Profile” TKO for classic Mustangs exciting is its no-nonsense fitment. This is a bolt-in swap from Modern Driveline without modifications to the transmission tunnel. That’s correct, no cutting. The Modern Driveline Low-Profile TKO will even fit the 1965-1966 Mustang with minor floor support modifications but is otherwise a simple fit that clears the tunnel and lines up nicely with the factory shifter opening.

We’re working with a special-order Poppy Red 1967 Mustang hardtop originally equipped with a 200ci inline-six. With great care, its owner, Brian Bulow, carried out a 385-Series Lincoln 460ci big-block with C6 Select-Shift automatic swap. Brian decided he wanted to have more fun than he was getting from a C6 automatic and Couture stepped up to the challenge by developing a “Low-Profile” TKO five-speed conversion kit that could handle the power of a Ford big-block and fit comfortably into a classic Mustang.

Couture and his technical staff spent months developing a TKO “Low-Profile” five-speed transmission specifically for 1967-1970 Mustangs with small- and big-block V-8s. This was not an easy task for Modern Driveline, because there’s a lot of inconsistency among some big-block conversions, especially those with the 385-series 429/460 engines.

01. Modern Driveline’s “Low-Profile” TKO-500 and 600 five-speed for 1967-1970 small- and big-block Mustangs is a complete, no-nonsense conversion package you can install in a weekend. You can order the TKO as a complete kit or à la carte, where you order only what you need. Shown here are the Modern Driveline TKO-600, a QuickTime steel bellhousing, Superior Friction clutch and flywheel, a custom transmission crossmember and mount, hydraulic clutch package, a shifter handle, and three quarts of Amsoil transmission fluid. There’s also the option of a cable clutch (not recommended for big-block due to heat issues), classic Mustang’s original Z-bar clutch release system, or Modern Driveline’s hydraulic clutch system.

02. Two Modern Driveline TKO-600 five-speed transmissions are positioned side-by-side. On the left is the standard Tremec TKO-600 box. On the right is Modern Driveline’s “Low-Profile” TKO-600, which will clear the 1967-1973 Mustang transmission tunnel without modifications. You do not have to cut the tunnel or its structure to accommodate the Low-Profile TKO. If you’re doing a 1965-1966 Mustang TKO swap some minor modifications are required at the floor support to clear the Low-Profile TKO, but it’s nothing major.

05. Bruce Couture of Modern Driveline removes the C6’s steel driveshaft. We won’t be able to reuse this shaft with the TKO and it is strongly discouraged to modify an existing shaft. We’re going to upgrade to a Dynotech aluminum shaft from Modern Driveline.

06. The C6’s custom-fabricated crossmember is removed using a 9/16-inch box-end wrench and socket.

07. This is a Ford C6 from a 1968 Lincoln Continental, which is coupled to the Lincoln’s 460ci big-block. Brian performed this conversion many years ago. He wanted more fun from his classic Mustang, which is why he looked to Bruce Couture and Modern Driveline for a quick path to “Low Profile” TKO-600 five-speed bang-shift performance.

08. Brian removes the 460’s flexplate and block separator plate in preparation for the TKO swap. We ran into fitment issues with the first generation Crites Restorations engine mounts, which positioned the engine and transmission too far forward. The second generation Crites 429/460 mounts positioned the engine where we needed it, making the swap straightforward. Because the 429/460 was not originally available in the 1967-1970 Mustang expect to see a variety of swaps out there.

10. Flywheel bolts, which have been dressed with a thread locker, are seated and torqued crisscross to 75-85 ft-lbs. The bellhousing to engine block separator plate has been installed prior to flywheel installation.

Did You Check Bellhousing Alignment?

Because engines, bellhousings, transmission cases, and other related parts are mass-produced; they’re imperfect components by design and execution. They’re not all manufactured to exacting specifications. There’s casting core shift. Tooling wears out. Factory workers have bad days and get careless. Tolerances can slip. What’s more, figure in rebuilds, line-boring/honing, overheats, and even normal operation (heat cycling and other stresses) will alter casting dimensions. When you add up all the variables in manufacturing you can wind up with an engine, crankshaft, bellhousing, and transmission out of alignment to where there are excessive side loads and a poor clutch-to-flywheel alignment. The result becomes poor power transfer (due to friction and side loading) and excessive wear.

The engine block, bellhousing, flywheel, clutch, and transmission input shaft must all be in perfect alignment for optimum performance. If any of it is out of alignment, which is common; wear, tear, and performance go off the rails. To ensure everything lines up, begin your checking with a dial indicator. Dial indicators are reasonably priced at Harbor Freight and are a must for every tool box.

First, always perform bell alignment with the block plate and flywheel installed and torqued to proper specifications. The clutch does not have to be installed for this procedure, only the flywheel you’re going to use. You must have perfectly clean contact surfaces. No paint or any debris, and there cannot be any imperfections in contact surfaces such as scratches or gouges. Believe it or not, these flaws will alter your measurements no matter how small.

As you make your way around the circumference for a complete 360 degrees, look for needle movement outside of proper limits. This really is about diameter, not radius, where you take the 0.010-inch figure and divide it in half to achieve the correction number. Needle movement must be less than 0.010-inch. Anything outside of 0.010-inch calls for the use of offset dowel pins, which get the bellhousing within proper limits as it relates to the flywheel and transmission. Offset dowel pins are generally available in 0.007-, 0.014-, and 0.021-inch sizes. Look at how much misalignment you have, then, determine which offset dowel pin you’re going to need to get alignment inside the 0.010-inch limit window.

Set up the dial indicator at either 9 or 12 o’clock and slowly turn the crankshaft. Observe needle movement at 3, 6, 9, and 12 o’clock. Write these numbers on a piece of paper or on the bell itself at these positions. Divide each number in half, which yields the irregularity, if any. If you get numbers below 0.010-inch, you’re good. Anything beyond 0.010-inch calls for offset engine block dowel pins from Modern Driveline, which are available in 0.007-, 0.014-, and 0.021-inch offset sizes.
We have installed new offset dowel pins from Modern Driveline to get our QuickTime bellhousing on center with the engine’s crankshaft. Anything off center by more than 0.010-inch (0.005-inch when divided by two) is unacceptable and will put side loads on your TKO’s input shaft. Those side loads cause unnecessary transmission stress, wear and tear.

11. With the flywheel properly torqued to 75-85 ft-lbs we’re ready for clutch installation and proper alignment. Modern Driveline issues a clutch alignment tool with every Superior clutch it sells.

12. Our Superior Friction diaphragm-style clutch pressure plate is mounted with bolts torqued at this time. Bolts get a dab of Loctite, are seated, and then torqued to 12-20 ft-lbs in a crisscross fashion in one-third values to bring on bolt torque/stretch gradually.

13. When you have a 385-series Ford big-block in a 1967 Mustang the going gets tight. Brian is reinstalling his lightweight reduction gear starter, which is smaller than the vintage Autolite beast it replaced. These new lightweight starters, available from Summit Racing Equipment under different brand names, are compact and make a lot of starting torque.

14. Because space is at a premium in a big-block Mustang it is suggested you consider an internal hydraulic clutch kit from Modern Driveline. This is a really nice piece with precision billet construction and steel braided hydraulic lines, which floats on your TKO’s input shaft bearing retainer.

16. The slave/release bearing O-ring seal, which may already be installed, is generously lubricated and installed as shown.

17. Our Modern Driveline TKO-600 is elevated and rolled into position. Because we have installed the clutch with an alignment tool and checked bell alignment installation is easy. The Low-Profile TKO-600 splines into the bell and clutch disc perfectly.

18. Hydraulic clutch slave cylinder lines exit through the bell as shown. There are two lines—pressure and bleed. Make sure they clear the clutch and flywheel.

19. Modern Driveline’s hydraulic clutch system fits nicely between the power brake booster and inner fender apron. This is exactly where the stock clutch release rod was positioned where it connected to the stock Z-bar/equalizer bar bellcrank on a factory manual transmission application.

20. This is Modern Driveline’s LF Series hydraulic clutch system as it appears up under the dash for 1967-1973 Mustangs and other popular Ford/Mercury compacts and intermediates. Modern Driveline got the pedal geometry just right to where there’s minimal pedal effort and smooth function.

22. The Modern Driveline TKO crossmember is installed next using factory hardware. Bolt heads at the chassis should be pointed toward the front of the vehicle. You will need a 9/16-inch box-end wrench and socket for this step. Mount nuts call for an 11/16-inch socket.

24. Driveline angle is checked with this cell phone app. This is an important number because it shows universal joint angle at both ends of the driveshaft. This is known as the slope of inclination. All driveline angles must be within one-degree of each other. Driveline angle should be checked with all four wheels on level ground with tires properly inflated.

Brian Bulow tells Mustang Monthly the transformation from C6 slush-o-matic to the crisp performance of Modern Driveline’s Low-Profile TKO-600 has been phenomenal. The raw power of Ford’s 385-series fat-block is felt from that slip of the clutch through the whine of new cogs. There’s nowhere for the power to be lost in a TKO. What about your big-block Mustang project? Are you ready for TKO?