Differential Gears and How They Affect Your Mustang 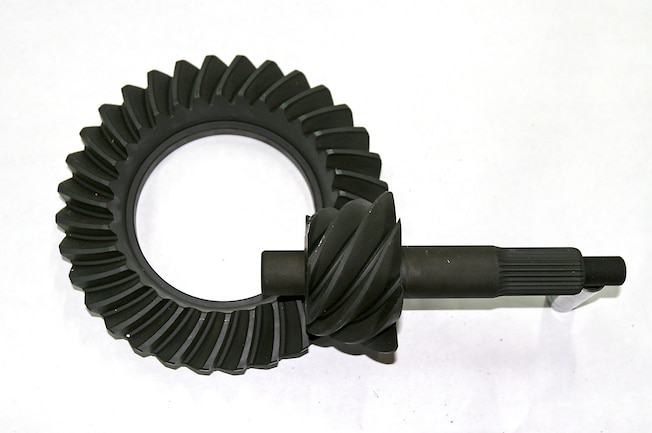 So you’ve got a sweet late-model Mustang that you’ve dumped a few mods into, but now you want to make it fly a little faster, right? One of the easiest ways to give your pony more pep in its step is to upgrade to a lower gearset out back. Typically, most 1994-present Mustangs are equipped with 3.27-3.55 gears from the factory, while Fox-bodies tend to have either 3.08 gears or, worse yet, the 2.73 gears that would be perfect for a NASCAR Super Speedway but are just about useless on the street. While these gears are fine for a stock car, a lower gearset will allow your Mustang to accelerate quicker into its powerband.

As you can probably guess, the higher the number, the faster the car will accelerate down the road. Numerically higher ratios are what we call lower ratio gears. For example, a 4.10 gear would make the pinion gear rotate four full turns as well as another tenth of a turn before the ring gear cycled through one full turn. The gears are able to take advantage of more engine power to get the car tracking faster on the blacktop. A numerically lower gearset, by comparison, will not accelerate quite as fast but will have more top-end speed.

Does this mean you can just select the steepest gear available for the wildest results? Not quite. There’s such a thing as too much gear, and it brings about a few drawbacks. First, it can limit your top speed since your final drive ratio will be lower than it was in stock configuration. That’s why you don’t see guys show up to Bonneville Speed Week with 4.88 gears and a three-speed automatic. A combo like this would most likely run out of steam at 95 mph as it screamed past 6,000 rpm. Just to give you an idea, at 160 mph, the engine would have to spin at over 10,000 rpm.

At the same time, if you intend to run your dedicated track car on your local eighth-mile dragstrip, you can run a pretty steep gear to help the car accelerate quicker out of the hole. We’ve seen some folks run a 5.13 gear to get moving in a hurry on the eighth-mile. You won’t have to worry about top speed on a short track, but if you plan on hitting the 1,320, you should consider a slightly higher gear ratio. Typically, a 3.73 to 4.10 gear is where you want to be for a street/strip combo.

If your Mustang is strictly used on the strip and gets trailered to the track, a 4.56 gear might be more appropriate depending on your combination. At the end of the day, it all boils down to the intended use of the car, as well as the combination of parts and tire height.