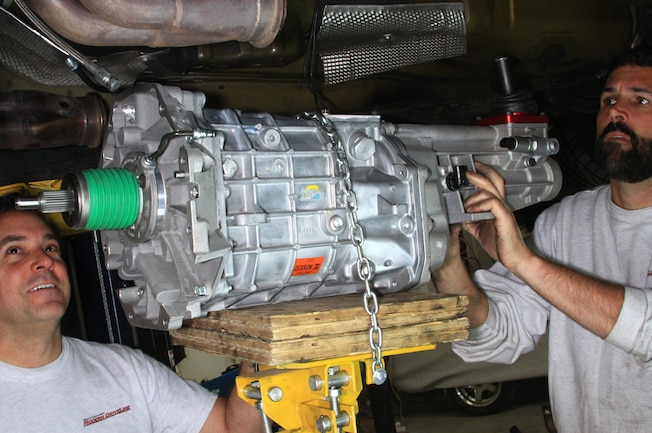 Ford has conceived a hot Mustang fun car we could have only dreamed of 30 years ago with those decidedly lame 175-horse Mustang GTs of the early 1980s. Today, America’s original fun car brings us brute power, incredible fuel economy, and real comfort as standard equipment. That said, it makes you wonder what Ford was thinking when it opted for the remotely shifted Getrag MT-82 six-speed transmission for the S197 Mustang. Though we appreciate six-speeds and incredible power, when the heat gets hot we want solid, predictable shifting.

Modern Driveline has always kept a close eye on what enthusiasts want and need and has developed a Tremec T-56 Magnum XL six-speed transmission conversion package you can install in a weekend. Because Modern Driveline is an enthusiast-driven company, it serves the customer with real solutions you can use and enjoy every day. Though Modern Driveline’s was founded for classic Mustang five-speed conversions and easy-to-install cable clutch systems, it has aggressively grown its product line into a vast selection of Tremec five- and six-speed transmissions and driveline packages for all Mustang generations including the 2005-2015 Mustang and Mustang GT.

If you’re driving a 2011-2014 Mustang with the 3.7L DOHC V-6 or 5.0L DOHC Coyote V-8, you’re undoubtedly frustrated with sloppy shifts, gear clash, disappointing acceleration, and durability issues. And despite the Mustang’s exceptional build quality, the factory’s Getrag MT-82 six-speed just isn’t up to the job in high-performance applications. The MT-82 suffers from an unacceptable failure rate and can’t be described as a user friendly gearbox. It tends to get stuck in gear during hard aggressive shifting. It also tends to break. It has a subpar externally mounted rail-style shifter. We’ve even seen bolts fall out of the factory shifter. Because the factory Getrag MT-82 six-speed has never been up to the task it was designed for, Modern Driveline engineers have been working on a Tremec T-56 Magnum XL six-speed conversion package fully capable and ready for action in your 2011-2014 3.7L or 5.0L Mustang.

The Tremec T-56 Magnum XL conversion package is an easy weekend install because Modern Driveline has thought of all it for you. This installation has been executed and photographed to show you how easy the installation is and what it will mean for your S197 Mustang driving experience.

Modern Driveline’s Tremec T-56 Magnum XL is the latest upgrade in this rugged six-speed’s family bloodline. The T-56 six-speed combines Tremec’s great OEM engineering with the race-ready demeanor of the brute TKO five-speed. The result is a bulletproof six-speed transmission that will take up to 700 lb-ft of torque.

The T-56 Magnum XL takes the Magnum one further with an extended-length tailshaft housing that incorporates the shifter and rail into the transmission instead of the sloppy nature of the remote tunnel-mounted MT-82 shifter. The T-56 has been developed specifically for the S197 Mustang, which makes it a perfect bolt-in swap for the 2011-14 Mustang (3.7L) and Mustang GT (5.0L) without special modifications.

What makes the Tremec T-56 Magnum XL superior is dual-ratio overdrive for a broad range of driving conditions, torque capacity of 700 lb-ft yet with smooth shifts, and the most rugged construction of any six-speed in the industry. The T-56 is truly a new transmission from the ground up designed specifically for your S197 Mustang.

Of the many substantial upgrades, the ones below will probably be the most pertinent and sought-after features that will set the T-56 Magnum apart from the rest. Here’s what you get.

1. The Tremec T-56 Magnum XL arrives from Modern Driveline with all electrical connectors and harnesses—truly plug-and-play. This is the speed sensor.

3. This is the back-up light switch and connector.

4. This is the factory-installed Getrag MT-82 six-speed transmission with its external rail-style shifter and cast crossmember. This transmission falls short in two areas. First, it is not rugged enough for the task it was selected for. Second, it is externally shifted, which presents another weak link.

5. Bruce Couture, president of Modern Driveline, begins MT-82 removal with the exhaust system, disconnecting the O2 sensors and pipes. The S197 exhaust system is the easiest to remove and reinstall in Mustang history because it uses aviation technology and user-friendly couplings.

6. Glenn Cope’s 2011 Mustang with 3.7L DOHC power already has the one-piece Dynatech driveshaft conversion from Modern Driveline. However, it is sized for the MT-82 and will have to be replaced.

7. This is the factory MT-82 shifter with a Barton support, which fastens to the tunnel. It improves support but does not eliminate the sloppy shifting problem.

8. Because the S197 Mustang has a snap together interior where everything pops together during vehicle assembly at Ford’s Flat Rock, Michigan, plant, disassembly is easy. Console is disassembled to access the shifter and connections.

9. The shifter is fastened to the tunnel via two 13mm flange nuts easily removed as shown. The fundamental problem here is inadequate shifter support from the factory.

10. With the MT-82 properly supported, the cast crossmember is removed next as shown via four metric body bolts. Mount studs are also metric. This piece is not only a crossmember but also a chassis stiffener.

11. The starter is disconnected and removed next. Did you remember to disconnect the negative cable at the battery? You must do that first.

13. The MT-82 Getrag is lowered from the chassis. What makes the MT-82 different than the T-56 is its integral bellhousing and external shifter just for starters. It does not employ a slip yoke like the T-56 does.

15. Check out the factory MT-82 shifter support, which are these two studs. They don’t even begin to provide adequate support.

16. Here’s the Getrag MT-82 six-speed’s shifter assembly, which is an externally mounted rail-style shifter. The Barton short-throw shifter is a great shifter in its own right. However, how it is tied to the transmission is the weakness. The downside to this shifter is the absence of the kind of support you need for serious bang shifting.

17. Glenn Cope’s 2011 3.7L DOHC V-6 Mustang has seen a lot of hard use. This aftermarket clutch is a replacement, and it needs to be replaced again. We’re going with a Superior clutch from Modern Driveline.

18. Because Cope’s Mustang witnesses a lot of high-performance driving, the clutch and flywheel are toast. We like the 3.7L engine’s eight-bolt crank. Talk about rugged!

19. This is the crank trigger and reluctor wheel, which are located at the back of the engine with both the 3.7L Duratech V-6 and 5.0L Coyote V-8. This sensor is well protected. If it should fail, it will be easy to replace.

20. Like all Ford engines since the mid-1980s, the 3.7L Duratech V-6 is fitted with a one-piece rear main crankshaft seal. Cope’s was leaking, which called for replacement.

21. This image demonstrates the reluctor wheel’s relationship with the new Modern Driveline flywheel. We are checking it for proper fit, and we are good to go.

22. The S197’s hydraulic clutch slave cylinder is not fitted with a bleeder. You will have to submerge the line end in brake fluid and deeply press the piston until all air bubbles are gone. This is a lengthy process because the air does not escape easily. During clutch operation remaining air will escape to the master cylinder.

23. Modern Driveline offers a complete line of clutches, including McLeod Racing twin-disc clutches for high-performance driving. You have quite a choice, including the RST and RXT Street Twin clutches.

24. For Cope’s Mustang, we’re opting for a Superior organic clutch and Modern Driveline flywheel with new hardware included in the kit.

25. The Superior clutch and steel flywheel from Modern Driveline are installed using a thread locker on all bolt threads. A clutch alignment tool is included in the kit. Once the bolts are snugged, they are torqued to 25 lb-ft in a crisscross pattern for uniform pull-down and seating. A new clutch pilot bearing (also included in the kit) has been installed.

26. QuickTime’s newest bell from Modern Driveline is seated, checked for any clearance and fitment issues, and permanently installed.

The T-56 Magnum XL’s integral rail-style shifter offers you confidence because it is engineered right into the transmission instead of being an afterthought attached to the vehicle. What’s more, because the rugged T-56 Magnum XL is engineered to be more user-friendly, acceleration is crisp to the point where you don’t run out of engine before it is time to upshift into Second.

Tremec has taken the original bulletproof T-56 and blended in the nuances of the TR-6060 six-speed to create the T-56 Magnum. And because it bolts right into your S197 Mustang without modifications, it gets to wear the name Magnum XL. The Magnum XL is the best-driving, smoothest-shifting, toughest six-speed in the industry.

Modern Driveline provides you with a rugged steel transmission crossmember that bolts to the chassis and transmission without any modifications.

This is the T-56’s electronic speedometer ratio adaptor, which does two things. It changes the pulse count of the transmission to match the MT-82’s calibration as well as the wire configuration from three-wire to two-wire. Also, the dip switch allows for changes in tire size and axle ratio— no need for the dealer to recalibrate.

The T-56 Magnum XL six-speed is a perfect fit and without modifications. When you grab the Modern Driveline shifter, get on the power, and start banging gears aggressively, this thing feels good in your hand. And when it’s time for a weekend getaway, it does that well too.