Tremec Transmissions 101 for Mustangs and the Aftermarket

Synchronized Success: Taking a look at Tremec transmission for Mustang and the aftermarket. 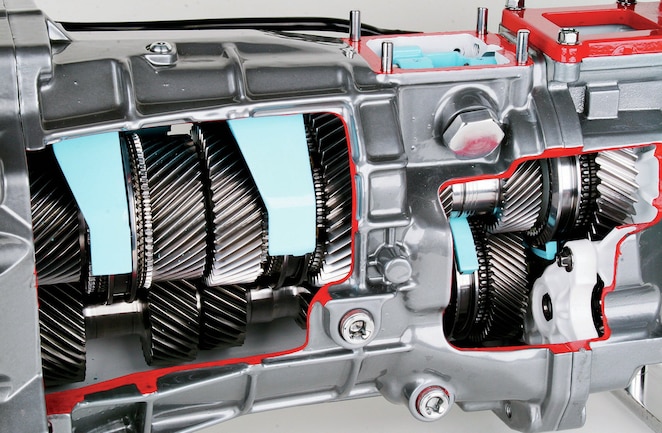 Oh, poor T-5 transmission, how you’ve been powershifted relentlessly for years. Your clutch forks flexing, your synchronizers shedding their brass teeth, your gears chipping. Sometimes you disagreed and denied us Third gear (it was always your fault), and sometimes you just threw in the towel and said, “Sorry, I’ve no gears left to give.” Most of the time, though, you carried on, engaging each forward gear as we tried to impress our friends with our no-lift shifting prowess. You propelled many a 5.0L pilot to glory on the street and track, and for that, we thank you.

Thirty-one years after its debut, the T-5 is still a popular option among Fox Mustang enthusiasts as well as a host of other late-model and classic car owners. The T-5, and the siblings that followed, are arguably responsible for generating a myriad of peripheral parts manufacturing and sales—things like shifters and knobs, clutch quadrants and cables, crossmembers, steel bearing retainers, transmission mounts, and perhaps even clutches. Don’t forget the countless tubes of Permatex needed to seal those shifters to the bases, and the quarts of synthetic ATF. Looking back, Tremec Transmissions, which celebrated 50 years of business in 2014, has been a huge part of our Mustang hobby.

With that in mind, we decided to take a look at Tremec’s late-model Mustang offerings as well as the company’s high-performance aftermarket upgrades. Special thanks go to Tremec’s Jim Averil, Kevin Ryan, and Nate Tovey for all of their help with putting this article together.

Tremec went to work manufacturing transmissions for Ford, GM, Chrysler, and American Motors. By 1970, the company was producing 500,000 units and exporting 85 percent of it. Tremec licensed several transmission models from BorgWarner, Clark, and New Process, and did some strategic merging with ZF, Cummins, and Rockwell. The company later acquired the BorgWarner transmission business and the rights to build the T-5 and T-56 transmissions.

Since then, Tremec has had its ups and downs and gone through various mergers and acquisitions that have led to it becoming a global manufacturer for all sorts of vehicles all over the world—everything from tractor-trailers to McLaren supercars and more. The company’s product catalog goes well beyond the American domestic offerings we have become familiar with. Thankfully, Tremec continues to support us both at the OE and aftermarket levels.

The box that allowed Mustang owners to powershift their way to superiority over Grand Nationals, Iroc Camaros, and Pontiac Trans Ams is based off of a traditional Top Loader four-speed design. The Top Loader has seen many iterations, but most people associate it with the later Ford-designed version. The T-5 picked up where that trans left off, going to an single-rail internal linkage shifter, a design practice that BorgWarner employed in most all of its transmissions. Internal-rail arrangements offer less deflection for improved shift quality, and do not invite road debris to contaminate the linkage of the transmission.

Productionwise the T-5 began life as a four-speed in the Chevy Chevette, though we were told that some production issues allowed a five-speed version to end up in the cars without anyone knowing any differently. The original design, though, morphed into more than 40 versions for numerous applications.

The internal design kept changing as well, as initial offerings featured machined-brass synchronizer friction materials and used motor oil for lubrication. As the OEMs asked for better shift quality, Tremec put organic linings into the cone clutches of the synchronizers. Double-cone designs were then employed, which brought more capacity to the gearbox as well as the need for lighter lubricants, such as ATF, which also offered greater efficiency. The aftermarket has also contributed to the development of the T-5, with companies offering aftermarket heavy-duty gearsets, rebuild kits, and more.

After the T-5 five-speed came a number of other Tremec gearboxes. Some were revered, some not so much. They all did what they were intended to do for Ford, and once Tremec saw enthusiasts needed something a bit more stout, the company went to work to provide us with the TR-3550 five-speed.

Designed to be an aftermarket offering from the outset, the TR-3550 became the gearbox of choice for Mustang racers across the country. If you had heads, cam, and a Vortech or Paxton supercharger, your next upgrade was a 3550 Tremec, as you likely tore up a few (or several) T-5 transmissions up to that point. Proving its mettle as a race-worthy transmission, the TR-3550 did see one OEM application: the 1995 Mustang Cobra R.

The TR-3550 became a mainstay for the company and, as such, was refined and evolved for a myriad of applications. Eventual upgrades led to the renaming of the gearbox; TKO is for the technical knockout of the transmissions it was to replace. With two models offering 500 lb-ft and 600 lb-ft torque ratings, the TKO series of transmissions offers numerous gearset options. The TKO 500 is also a bit of a throwback in that it is still offered with the Ford 10-spline input shaft. Improving its application range, the TKO offers multiple shifter locations, mounting configurations, gearing options, and electric and mechanical speedometer pickups.

Brought to market for the 1996 Mustang model year and run to the middle of the 2001 model year, the T-45 was designed to pick up where the T-5 left off. It was an end-loaded design. All gears were now fully synchronized, and the larger synchronizer design and friction materials from the T-56 were employed.

Whereas the torque capacity of the T-5 was a mere 310 lb-ft, the T-45 was able to handle 350. Despite that, the T-45s seemed to get swapped out frequently for the TKO and T-56 gearboxes. This was likely a result of the increased ease with which one could make monstrous horsepower in late-model Mustangs and Cobras.

Arguably as legendary as the T-5, Tremec’s T-56 remains a popular option for many enthusiasts in a variety of applications. The T-56 was first released in 1992 behind the V-10 of the Dodge Viper. With a double overdrive, vehicles could drop highway cruise rpm and the 1-4 gear ratios could be closer for improved performance. Large synchronizers were employed to deliver “silky smooth” operation that OEM customers were demanding.

The initial torque rating for the T-56 was a mere 350 lb-ft, but it grew to 450 and even 500 for aftermarket applications. It’s no secret that GM’s F-body twins and Corvette were making much more in the way of torque than the Modular-powered Mustang of the time. As such, they employed the T-56 starting in 1993 for the F-bodies and 1997 for the Corvette. The Aston Martin DB7 got it in 1998, and its Vanquish brother received a fully automated and paddle-shifted version in 2001. Dodge also used it in its SRT10 Ram trucks.

With its lack of torque and ability to get away with a lighter-rated and (lighter-weighted) transmission, the Base and GT Mustang stayed with the T-45. The first appearance for the T-56 in a Mustang was in 2000, and only in the limited-production Cobra R. It would appear again 2003-2004 in the supercharged Cobra. More commonly referred to as the Terminator, the supercharged Cobra’s blown mill produced 390 lb-ft of torque, requiring something a bit beefier than the standard five-speed.

Continuing the evolution of the T-5/T-45, Tremec began supplying the end-loader TR-3650 for the Mustang GT in 2001. It was employed through the 2010 model year. It has proven to be a pretty stout transmission, even in the heavier S197 chassis.

With a 360 lb-ft of torque rating, the TR-3650 has seen duty behind the Mustang GT as well as the 2001 and 2008 Bullitt edition Mustangs and 2003-2004 Mustang Mach 1s. It features an integrated bellhousing, and the TR-3650s destined for the S197 Mustang used a different tailhousing designed for a remote-mounted shifter.

Building on the strengths of the T-56 as well as the many updates it had received over the years, Tremec performed a complete rethink for the TR-6060 six-speed manual transmission. The TR-6060 is an all-new design that shares no internal parts with the T-56. The T-56 had evolved into a stronger, more capable gearbox, but those attributes came at the cost of smooth shifting and drivability, at least from an OEM standpoint. As OEM and consumer demands changed, requiring strength and smoothness, the TR-6060 delivered.

Pretty much no components were left untouched during the rethink. Synchronizers, shift linkage, casting designs, and more were all updated. The heavier internals and changes to the gear case increased the weight of the box over the T-56, but it was well worth the trade-off. The TR-6060 is such a smooth shifter that you could downshift from Sixth to First (not that you would want to) and the internals would move quickly and freely.

Debuting in the 2007 Shelby GT500, the TR-6060 has gone on to be the transmission of choice for other manufacturers both here and in Australia.

To provide enthusiasts from all corners of the automotive market, Tremec developed the T-56 Magnum. Based on the TR-6060, the T-56 Magnum, or Magnum as it is now called, is fast becoming legendary in its own right. It is a rock-solid transmission capable of withstanding 700 lb-ft of torque. And who are we kidding? Much like enthusiasts did with the T-5, there are plenty who have gone well past the factory performance rating just because fast is never enough. We’ve seen 1,000-plus-horsepower S197s going down the quarter-mile with the Magnum delivering the goods on each gear change.

The T-56 Magnum has the same benefits as the TKO when it comes to bolting it up into a variety of applications. Shifter position is adjustable, electrical and mechanical speedometer options are there, and the lack of an integrated bellhousing means you can go to an aftermarket company like Quicktime Performance and get a bell that can mount the transmission to all sorts of powerplants.

Joining the Magnum is the Magnum XL, which was designed to fit into specific OE applications, in particular, the 2005 and newer S197 Mustang. The Magnum XL package also includes an SFI-approved, steel bellhousing with an enclosure plate; a swap-specific transmission crossmember; and an OE-quality transmission mount to make it a bolt-in upgrade. Utilizing a longer tailshaft housing, the Magnum XL does away with the stock-style, semiremote shifter and linkage.