How to Install the Strange Axle and Spool Package - Drag Lite

Drop weight and e.t. with Strange’s axle/spool package for 8.8s 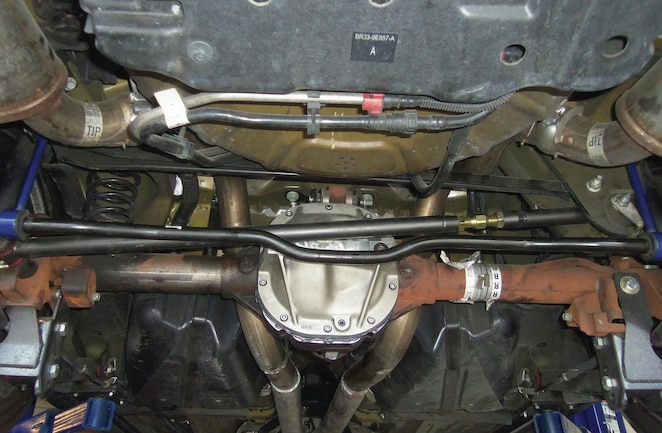 Performance is typically gained by exchanging stock pieces for readily available aftermarket parts and systems. Or, in some instances, one-off or custom treatments are used for making big steam.

The route a Stang owner takes to increased horsepower is purely dependent on his/her wants, needs, and of course “budget.” However, one nuance about big-time gains must be considered and dealt with accordingly when upgrades are made.

The fact that “horsepower (and torque) will expose the weakest link in a Mustang's drivetrain” is that nuance, and we've seen it overlooked time after time, through carnage that results when enthusiasts start putting the coals to their car's engine.

We've been amazed by the apparent ease with which '11-'14 Mustangs are able to rock chassis dynos with 1,000 hp, scoot across the quarter-mile in 9 seconds, and still commute down streets and freeways without a care.

For all intents and purposes, this trifecta is accomplished with a good, “built” engine, simple transmission upgrades (twin-disc clutch for stick cars, torque converter and input shaft for automatics), and a copious dose of additional intake air, brought forth by turbocharging, supercharging, or injecting a Coyote 5.0 with nitrous oxide.

However, despite all of the steam and good things that are its result, there is one downfall that we've seen more times than few: The factory-installed, 31-spline axles on '11-up Stangs give way to big power, especially when they're subjected to the increased loads that are generated during hard launches.

To combat this problem, Strange Engineering has assembled an impressive upgrade package that's designed for the 8.8-inch rearends in '05-to-present, V-8–powered Mustangs that are pumping out 700 horses or better (PN P3509F05S; $845). The set features a pair of steel alloy, 35-spline, S-Series axles; chrome-moly, lightweight Pro Race spool, C-clip eliminators (required by the NHRA for cars equipped with a spool and running 10.99 or quicker); and 1/2-inch wheel studs (5/8-inch studs and ABS rings are optional).

In addition to fortifying an S197's 8.8, the lightweight Strange pieces shed several pounds from a rear's overall rotating mass. The weight reduction benefits a Pony's on-track performance, more specifically its quickness in the first 60 feet of the dragstrip.

Eddie Rios of Addiction Motorsports in Canoga Park, California, found us Steve Adams' 9-second, twin-turbocharged '11 GT for this upgrade effort. Prior to our project date, two OEM axles and the stock Traction-Lok differential had fallen victim to the 930 rwhp and 800 lb-ft of torque of Adams' Pony. Such carnage makes it a perfect candidate for this rebuild, the highlights of which are presented in the following photos.

01. Loaded with factory-spec 31-spline axles, a Traction-Lok differential, and a 3.31 ring-and-pinion gearset, Steve’s 8.8 was ready for our upgrade. While the buildup of rubber in the wheel wells confirms the Pony’s track use, the 9-second Stang also serves as Adams’ general mode of transportation. He drives it almost everywhere he needs to be.

02. Eddie Rios of Addiction Motorsports gets things started by removing the differential cover and draining fluid from the rearend housing.

03. Here’s a close look at the stock, Traction-Lok differential. While this unit uses carbon fiber clutch plates, which actually are durable and designed for the higher torque loads of modified Mustangs, it has cast side gears that are prone to failure under dragstrip abuse. We are replacing this diff with Strange’ Engineering’s stronger, much lighter 35-spline spool. The 3.31 ring-and-pinion set is being reused.

04. After removing the C-clips from the ends of each stock axle, Rios pulls the axles out of the rearend housing.

05. On the left is the stock, 31-spline axle and a close-up of the channel at its tip that receives the C-shaped retaining clip. The C-clips lock axles in the differential after they’ve passed through the side gears. Factory axles measure 1.325 inches in diameter. By contrast, the Strange axles are thicker (1.490 inches) and solid tipped, and feature much-longer splines than the stock sticks.

06. Our new axles are set up with hardened, 1/2-inch wheel studs (5/8-inch are optional). Studs, along with the ABS rings and C-clip eliminators, can be installed by Strange Engineering for about 30 bucks. As you see in this comparative photo, the Strange studs are much longer than the OEM pieces, so it’s important to note that open-end lug nuts probably will be necessary.

07. Each axle is fitted with a pressed-on C-clip eliminator, which retain an axle in its tube should an axle break at any time (with C-clips, the entire axle and wheel can come flying out of and away from the car). If you think you’re looking at an ABS ring, your eyes aren’t deceiving you. Yes, with the Strange 35-spline sticks and eliminators, caliper brackets are available that allow using an S197’s stock rear brakes.

08. The new axles are forged from alloy steel, and heat treated for increased torsional strength. As you see, a Stang’s axles are not equal length. The shorter piece is installed in the driver’s side.

09. Installing C-clip eliminators requires cutting the bearing housings from each axle tube (approximately 1 inch), as axle bearings are incorporated in the eliminators themselves. Rios uses a reciprocating saw for this task.

10. A master bearing kit (PN R5231) is required for the upgrade. The set includes all of the bearings, races, shims, seals, and gaskets necessary for a Ford 8.8 rebuild.

11. Here’s a close look at the Strange Pro Race spool. The carrier is made of lightweight chromoly and will permanently lock both axles together so both rear tires will always turn at the same speed.

12. While the ring-and-pinion install kit is stocked with shims of varying thickness (for dialing in backlash/clearance between the ring-and-pinion gears), most experienced rearend rebuilders, like Rios, have a stash of shims they have accumulated over the years.

13. After assembling the spool and ring gear package (pressing bearings on and mating ring to the spool), Rios installs the upgraded differential into the rearend housing using shims that wedge between the spool bearings and axle tubes (note that we did not remove the pinion gear for this project). Backlash measurements are then taken, and the process of removing, reshimming, and reinstalling the spool/gear package is repeated until backlash is between 0.008 and 0.012 inch. When backlash is within these specs, Rios removes the test shims and bangs home. A dial indicator is then used to confirm that the ring gear’s runout is less than 0.004 inch (measured at the back surface of the ring).

14. To confirm that the ring-and-pinion is set up properly, Rios applies yellow transfer paint on the ring in a couple of areas and rotates the pinion gear to establish a contact pattern on the ring. Pinion depth for our project appears to be fine, as the pattern is evenly spread across the face of the gear’s teeth.

15. As we mentioned earlier in this report, despite being a C-clip–eliminator style of setup, the Strange 35-spline axle upgrade supports retaining OEM rear brakes on an ’05-present Mustang. This is made possible thanks to a pair of brackets that are designed specifically for the factory calipers. While the brackets are bolted to a flange on the axle tube, a bead of silicone is applied for additional adhesion.

16. With the brake caliper brackets in place, Rios installs the new axles and secures the entire works using the supplied hardened bolts.

17. The caliper brackets feature provisions for reinstalling the rear-brake ABS sensors in their original location.

18. After the axles are installed and everything is final checked, Rios lays an 1/8-inch bead of silicone around the differential cover and sets it in place. Oil is then added, and the suspension pieces and wheels are bolted back on.