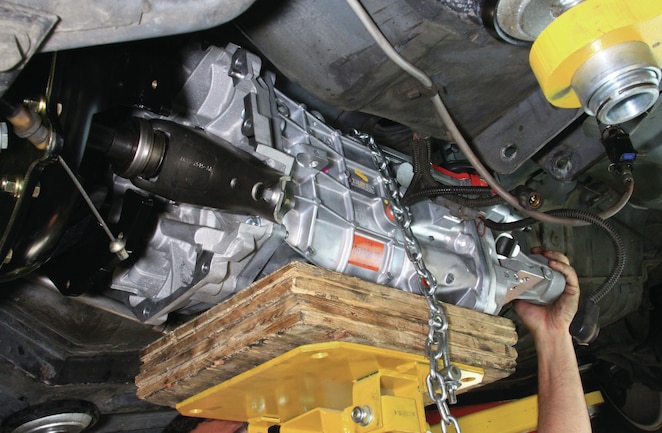 We've been shifting into overdrive for more than 30 years now. Ford introduced the five-speed transmission as a Mustang option in 1983 and it has been a mainstay ever since. Fifth gear was overdrive, which reduced engine rpm at highway speeds, making Mustangs more fuel efficient as well as more fun to drive. In 2000, Ford installed its first six-speed in the SVT Mustang Cobra R in very limited numbers. After that your only option for a six-speed in your Mustang was the top-of-the-line '03-'04 Cobra with its supercharged 4.6L four-valve, six-speed, and IRS drivetrain until the Shelby Mustang's six-speed debuted in 2007. It wasn't until 2011 when the six-speed became a regular Mustang feature in all engine/trim levels, inspiring us old timers to ask if you can install a six-speed in a '79-'93 Fox Mustang.

Bruce Couture of Modern Driveline answers this question with the new Tremec T-56 Magnum six-speed transmission conversion package for '79-'93 Fox body Mustangs with the 5.0L V-8. When Couture first told us about this conversion kit, we admit we were skeptical because no one had really done it before and without extensive modifications to get it to fit. This was when Couture decided to take on his own one-owner '88 Mustang GT to see what was involved. He was thrilled to learn only very minor transmission tunnel overlap joint trimming had to be performed to get the Tremec T-56 Magnum into a Fox Mustang.

We're going to quickly show you Modern Driveline's new T-56 Magnum transmission conversion kit for the '79-'93 Mustang to see just how easy it is to install one in your Fox.

Six-Speed in a Fox

When you buy the T-56 Magnum six-speed conversion package for your '79-'93 Mustang from Modern Driveline, here's what you can expect:

02. With the transmission safely supported, the crossmember is removed.

03. The catalytic converter H-pipe is removed for improved access. O2 sensors and Thermactor air pump tube are disconnected and safely placed out of the way.

04. The driveshaft is disconnected from the companion flange at the rear axle as shown and removed.

05. With the World Class T-5 transmission properly supported, the transmission is unbolted from the bellhousing and removed.

06. To remove the bellhousing a 5⁄8-inch socket is used. The starter has been removed and clutch cable disconnected at this time as well. Lastly the flywheel is removed from the rear of the engine.

07. The QuickTime separator plate is installed first. This is a nice piece that is thicker than the factory plate.

08. Couture is reusing his steel flywheel, which has been resurfaced and will be fitted with a new Superior Kevlar/organic clutch. Couture stresses the use of new flywheel bolts and a thread locker/sealer with proper application of torque in crisscross fashion in one-third values for even application of torque. A new pilot bearing has been installed as well.

09. A new Superior clutch and Kevlar/organic disc are installed. Thread locker is used on all bolts, which are torqued in crisscross fashion in one-third values.

10. The QuickTime steel bell from Modern Driveline is installed next. Notice the large void, which is to clear the T-56 Magnum’s clutch fork.

11. The T-56 Magnum is moved into place and aligned with the QuickTime bellhousing. This is actually one of the easiest transmission alignment and installation experiences there is.

12. The new crossmember is positioned and fit-checked before installation. This is something of a prototyping operation where parts are precision checked for proper fit.

13. The T-56 six-speed is bolted to the QuickTime bell and tightened. The clutch fork is checked for freedom of movement and the clutch cable is connected and properly adjusted.

14. A new DynoTech Engineering aluminum driveshaft from Modern Driveline is splined into place and checked for proper dimensions. You should see ¾ inch of slip yoke showing at the transmission with the driveshaft secured to the rear axle flange.

15. The speedometer cable’s driven gear is installed along with the back-up light switch harness and shifter lockout.

16. The starter is reinstalled next. Virtually any small-block Ford starter will fit the QuickTime bell and Modern Driveline flywheel.

17. It is such a rush seeing a six-speed shifter perfectly lined up with Couture’s ’88 Mustang GT transmission tunnel. All we need now is the dust boot and shifter handle.

18. The T-56 Magnum shifter is crisp and predictable. It feels good to hold in your hand. Not only do you have overdrive, but two overdrive ranges for the open road depending on how fast you want to go. Modern Driveline offers you tech support before and after the sale and will be there should you encounter a snag during installation.