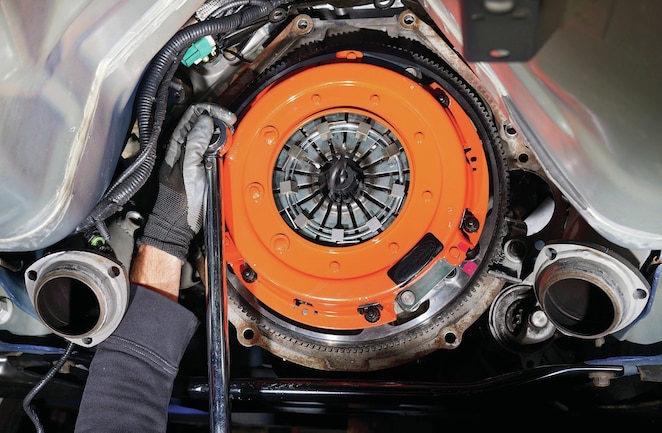 The landscape changed in 2003, when Ford's Special Vehicle Team shoehorned a factory-supercharged motor in the New Edge chassis. The resulting 390 hp (and more importantly, 390 lb-ft of torque) pushed the envelope of existing single-disc clutch technology.

To increase the holding capacity of a clutch, there are three options: increase clamping pressure (which equal greater pedal effort), increase the coefficient of friction (bite on the disc materials), or increase surface area (diameter or number of plates and discs). Higher clamping pressure requires more leg effort, and increasing friction can often make the clutch “grabby” and annoying to drive.

For those reasons, the diameter (surface area) of Mustang clutches grew steadily—from 10 inches for '79 to 11 inches for '99. By the time the Mustang sprouted a supercharger for '03, Ford ran out of real estate on the flywheel, and didn't have enough space between the engine and the transmission to fit a twin-disc clutch. So Ford was forced to increase the clutch clamp load to hold the boosted Snake's torque. Thus, the '03-'04 Cobras had one of the highest pedal effort requirements of any Mustang to date.

By now, it should be clear why the current GT500 includes a twin-disc clutch. The Shelby positions the engine/transmission relationship so there's more space between the flywheel and the transmission to fit two clutch discs. Voilà! Problem solved.

Today, 600 hp is commonplace, and best of all, the aftermarket stepped in to offer twin-disc clutches for '79-'04 Mustangs. However, most employ solid-hub clutch discs because there isn't enough space in the bellhousing for two sprung-hub discs. Unfortunately, solid clutch hubs transmit engine firing pulses to the driveline, sometimes making the transmission sound like it's lubricated with gravel.

The engineers at Centerforce recognized this dilemma and set out to design a twin-disc clutch with a dampened hub, which absorbs some of the NVH commonly associated with normal driving. The result is the Centerforce DYAD DS—a clutch with ridiculous holding capacity, albeit one that drives easily and is quiet like a stocker.

How much holding capacity, you ask? A chassis-twisting 1,300 lb-ft! A clutch with this kind of holding power combined with docile street manners was something we had to investigate further. Follow along as we show what makes the Centerforce DYAD DS clutch unique, and try one out in an '03 Cobra.

01. Each DYAD DS clutch kit comes with a “birth certificate” showing everything you ever wanted to know about your clutch. The average torque-holding capacity of this clutch is 1,345 lb-ft! The throwout bearing load is 345 pounds, which directly relates to pedal effort. For reference, the OEM ’03-’04 Cobra clutch is about 500 pounds, so this Centerforce takes nearly a third less effort to operate.

02. Stock Single Disc As you can see, the Centerforce DYAD DS clutch (right) has the same package height as the OEM Cobra clutch (left), but packs an extra plate and disc inside.

03. How does Centerforce pack 10 pounds of clutch in a 5-pound bag? Clever engineering. It includes a lightened steel flywheel with a recessed cavity to position the drive disc closer to the engine, leaving more space for the floater plate and disc.

04. Many multi-disc clutches use a floater plate between each clutch disc, which can rattle against the drive lugs when the clutch is disengaged—not a problem for a race car, but annoying in a street car. Centerforce counteracts floater plate rattle with an ingenious anti-rattle system. Pins attached to the flywheel fit in bushings in the floater plate that take up the slop and eliminate noise.

06. Because sprung hub is bulkier than a solid hub, two sprung hubs stacked together won’t fit on a ’79-’04 Mustang transmission input shaft. Centerforce developed a system that mates the floater disc (top) to the sprung hub inside the drive disc (bottom). The result is a quiet, compact twin-disc clutch.

07. We started installation by releasing tension on the clutch cable using an adjustable firewall adjuster.

08. Then we disconnected the clutch cable from the fork.

10. Before dropping the gearbox, we removed the exhaust midpipe and driveshaft.

11. Then we unbolted the transmission and lowered it from the car.

12. After removing the bellhousing, we unbolted the OEM pressure plate from the flywheel.

13. We screwed two flywheel bolts into the threaded holes in the flywheel to remove it from the crankshaft.

14. With the OEM clutch removed, we compared it to the Centerforce twin-disc. Weighing in at 9.8 pounds heavier than the OEM clutch and aluminum flywheel, we consider that a small price to pay for nearly triple the holding capacity!

17. Next came the floater disc. We placed the side marked “floater side” against the floater plate.

18. We aligned the balance mark on the clutch cover to the marks on the floater and flywheel, incrementally fastened the clutch cover, and secured it per the torque values specified in the instructions.

19. With the clutch buttoned up, we removed the alignment tool and replaced the bellhousing and starter motor.

20. We finished the installation by replacing the gearbox, exhaust, driveshaft, shifter, and clutch linkage.

Centerforce recommended we bed in the clutch with 450-500 miles of street driving before giving it the beans, but from the moment we pulled out of the garage, we were impressed. Nothing about the Centerforce DYAD DS clutch hints at its Herculean holding capacity. The clutch engages smoothly, is quiet as a mouse, and the pedal effort is less than the stock Cobra clutch. That’s a win/win/win in our book.