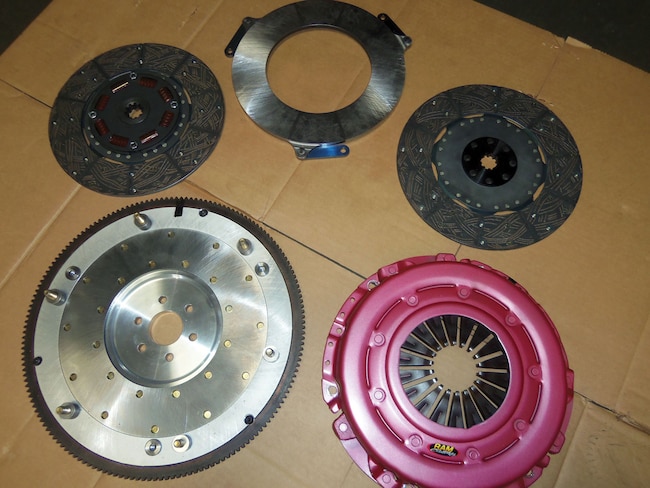 Horse Sense: Although they are wear items, clutches typically can last for thousands of miles of non-abusive driving in stock 'Stangs. However, as we've learned over the years, horsepower will seek and ultimately destroy the proverbial weakest link in a stocker's drivetrain. Weak links are exposed by aforementioned wear, and also by making modifications designed to increase a Mustang's performance output. It only makes sense that the clutch receive some love as well, because when you consider that weak-link theory, OEM hardware will probably fail pretty quickly when power increases.

It has been said that the shortest distance between two points is a straight line. We certainly endorse that idea, especially when it comes to getting to the far side of a dragstrip. There's no disputing that when a 'Stang's quarter-mile performance is being measured by the e.t. clocks, nothing beats the direct approach.

When applying this concept to a Mustang's horsepower, which is arguably its most- important performance criteria, big steam definitely requires a straight, true, and solid link between a Pony's engine and its hooves. While it's imperative that the engine, transmission, driveshaft, and rearend are good and lined up properly, having a clutch system that's up to the task of harnessing the engine's grunt is just as crucial for stick-shifted Mustangs.

The clutch is the first component that helps maintain the solid part of the link equation, keeping the transmission's input shaft turning in 1-to-1 unison with the engine when you go hard on the gas and rpm starts to climb. Slip is the result of the clutch's inability to corral an engine's power and torque. It is the most common form of clutch failure, caused by deteriorating clutch-disc lining or flywheel surfaces, usually brought about by excessive heat.

Earlier 'Stangs feature single-disc clutch systems, while some of the newer SVT Ponies are equipped with twin-disc setups from the factory. As you can imagine, there are limits to the amount of power and torque that a clutch design can handle. So, when increases come about, appropriate changes must be made. With horsepower and torque values scaling beyond 700 horsepower and 650 lb-ft of torque, more discs are usually needed to survive and retain an acceptable pedal effort. Twin-discs spread torque load out over several surfaces, reducing inertia, and increasing clamping forces. But lower inertia can result in trickier engagement if it's not dialed in for the application.

This doesn't mean Ponies with less horsepower are excluded from using multiple clutch discs. To the contrary, there now are dual-disc clutch systems designed for both race and street applications. These iterations of the twin-discs feature enhanced clamping force thanks to heavier pressure plates and greater inertia for smooth engagement and lower pedal effort. Basically, today's dual-disc clutches and hydraulic clutch-release bearings certainly can aid a 500hp blown 'Stang the same way they will a twin-turbo'd beast that makes twice as much power.

Our association with brothers Ricardo and Gonzalo Topete of GTR High Performance in Rancho Cucamonga, California, is fortunate. GTR has a long roster of customers like Ken, who are always available during our time of tech-project need.

Read along with the accompanying photos and captions covering the clutch swap, which was performed by GTR's wundertech Eddie Zapata.