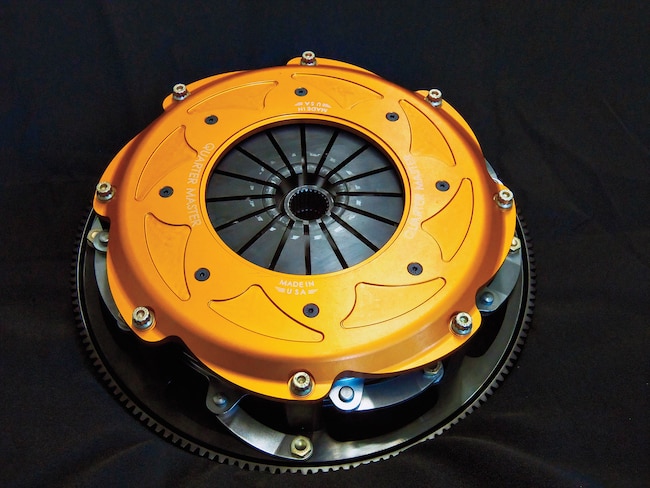 Horse Sense: Throughout the '70s and well into the '00s and beyond, Quarter Master has long been recognized for clutch systems designed for circle-track racing. However, despite making its mark in roundy-round competition, a little known fact about the company is that it actually started out as drag-race chassis manufacturer; Quarter Master (for quarter-mile... get it?). It's all in the name!

Working with bad-dude Mustangs is our daily mission here. Be it a feature story on a hot-looking Pony, or a technical report on an innovative new part, bringing you wall-to-wall coverage about the latest and greatest is what we do.

While Mustang LXs and GTs are our typical beat, there are occasions when our spotlight shines on Shelby GT500s. These factory-supercharged, Four-Valve beasts respond well to basic bolt-ons and tuning.

Of course, GT500s are plenty awesome in bone-stock form, so the aforementioned upgrades typically are made based on owners' desire to improve their Ponies, as opposed to there being a specific need for different hardware. However, with this being said, the clutch is one component that actually needs addressing when you decide to take a Shelby's power and torque into the 700-1,000hp stratosphere, which seems the norm for modded Shelbys.

As with any stick-shifted 'Stang, the clutch makes all the difference in ensuring every bit of the engine's performance is transmitted from the engine to the rear wheels. Interestingly, Ford's latest higher-output Mustangs rely on factory-installed, Sachs twin-disc clutch units that are great at stock power levels, but can fold like a weak hand in the face of big steam. Enter Quarter Master Racing Clutches and Driveline Components (www.quartermasterusa.com) with a new twin-disc clutch option for stout street Shelbys.

We followed along as Cody Volkenant of Addiction Motorsports bolted the Optimum-SR unit in Saoud's supercharged Pony. While the clutch kit and the hydraulic clutch-release bearing (PN 713402) and adapter (PN 730023) we installed can't be categorized as low-buck, they're quality choices for high-end Shelby 'Stangs with extra oats. Installing this setup is best left for the experts to handle, as exhaust and drivetrain pieces must be removed, and extremely detailed measurements are necessary for doing it properly.

For the 2012 King of the Street, it was quality, not quantity in this year's battle for street-car supremacy.