Choose Universal Joints And Driveshafts For Your Mustang

Selecting The Right Universal Joints And Driveshaft For A Smooth, Vibration-Free Ride

Wikipedia, a free online encyclopedia that's editable by the public, defines a universal joint as something that allows a rigid rod (shaft) to articulate or bend in any direction. U-joints have a tough task because they transfer an engine's power from the transmission to the rear axle. So they must be strong and capable of articulating with the driveshaft and rear axle, which move up and down with the suspension system as the car rolls down the road.

According to Wikipedia, the universal joint dates back to ancient Greek times. In 1545, an Italian mathematician, Gerolamo Cardano, advanced the idea further, suggesting they be used for transmitting motive power. In the 1600s, Robert Hooke created the first working universal joint, also known as Hooke's joint. Our own Henry Ford coined the name "universal joint." Other names include Cardan joints, Hardy-Spicer joints, and Polhem knots.

Universal joints are chosen for their applications based on vehicle weight, expected duty, and the amount of power the engine will produce. For example, you wouldn't run a six-cylinder universal joint and driveshaft package with a 428 Cobra Jet engine; there wouldn't be enough shaft or U-joint to handle the torque. So we have to size universal joints, driveshafts, and yokes to power, vehicle weight, and anticipated duty for safe, reliable operation. 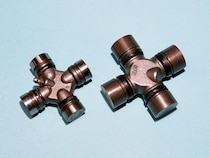 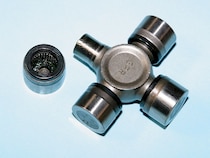 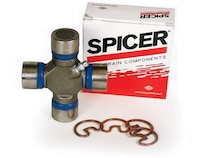 There are five basic universal joint sizes common to Mustangs. From smallest to largest, they are the Spicer 1100, 1260, 1310, 1330, and 1350. The numbers identify basic dimensions without regard to bearing cap size, which depends on driveshaft and yoke size. For six-cylinder applications, expect to see a Spicer 1100 or 1260. For light-duty V-8 applications, you'll see the Spicer 1310. For heavy-duty applications, such as big-blocks, expect to see the 1330. A popular upgrade from that is the Spicer 1350, which is a race-ready universal joint sized for horrific amounts of torque.

Universal joints are rated based on continuous, endurance, and peak torque. Continuous torque determines how much torque the universal joint can stand for an extended period of time. This is based on the life rating of bearing caps-5,000 hours of operation with the driveshaft at 3 feet misalignment at 100 rpm, which is torture for a U-joint. This is the worst-case scenario, known as B-10 bearing life, for a universal joint. A Mustang will never see this kind of abuse.

Endurance torque is similar to continuous torque, but it's based on reverse torque, with the shaft operating both ways in normal operation. Because we rarely back up the same way we drive forward, this isn't a concern in normal operation. Peak torque is the maximum amount of torque a universal joint can stand before it fails. Ratings are rooted in material strength, which is rooted in material type and thickness. The larger a universal joint, the stronger it is. You must also have a shaft large enough to back up that strength. As a rule, it's impossible to get one without the other thanks to manufacturers' yoke sizing. 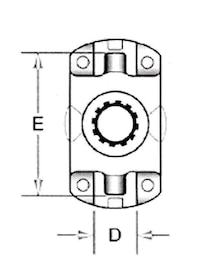 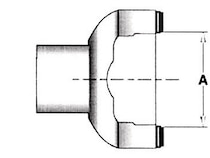 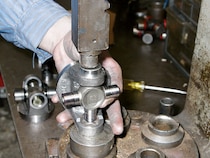 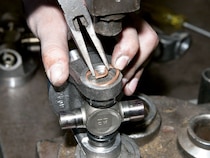 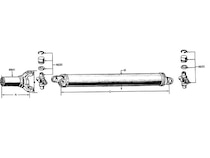 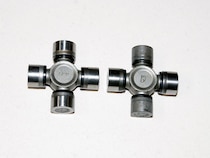 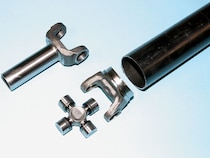 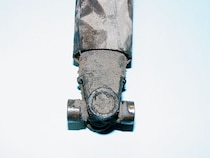 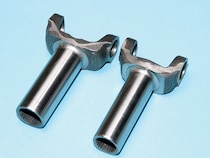 Ordering A New Shaft
Inland Empire Driveline and Mustangs Plus keep ready-to-order driveshaft assemblies on the shelf for most Mustang applications. Inland Empire Driveline can make a custom driveshaft if you follow the proper measuring instructions on its Web site. Measure "X" from the rear axle yoke to the tip of your transmission tailshaft housing with the rear suspension at normal ride height. Allow "Y" distance for slip-yoke travel-normally around 1-1/2 inches of exposed slip-yoke from where the yoke meets the universal joint to tailshaft seal. Be specific when you order, including universal joint dimensions at both ends.

Another important thing to remember is to keep your driveline parallel, which means each end of the driveshaft (both yokes) should be parallel at all times. Odd angles will cause vibration and failure. Pinion and rear universal joint angle should be at the same number of degrees as the front universal joint for smooth operation.

Tube diameter and material thickness increase for aluminum shafts. Aluminum driveshafts aren't suggested for every application. Opt for one in a six-cylinder or small-block, while steel is suggested for big-block Mustangs. For those with healthy budgets and imagination, Inland Empire Driveline can build a composite shaft that's even lighter than aluminum. It also looks high-tech for your restomod show car.