Upgrade A '71-'73 Rearend And Suspension

For those who dig '71-'73 Mustang performance, here's a couple of handling solutions from Mustangs Plus and Bill Thomas Enterprises. Mustangs Plus gets it right with a selection of cool suspension components. Bill Thomas Enterprises has the talent and goods to build everything from a stock differential to a brute chunk that can take 700 hp. Randy's Ring & Pinion is setting us up with the hard parts necessary to make it happen.

Fourth-generation '71-'73 Mustangs get a lot of criticism for their size and weight, but they aren't much different from '65-'70 Mustangs. Up front, the '71-'73 models employ a Maverick/ Torino/Fairlane unit body structure intended to accommodate big horsepower planned for these cars during the late '60s. Open the hood on a '71-'73 and you'll see big shock towers and a large engine compartment. Insurance rates and government regulations killed the big engines and horsepower that Ford had planned for the Mustang beyond 1971. After the '71 429 Cobra Jet and Boss 351, the horsepower wars came to an end. That doesn't mean you can't get more out of a non-Boss or CJ '71-'73 Mustang. These wide-track models are long on potential and make great road cars.

At the rear, you can ditch the worn-out elliptical four-leaf springs and get into stiffer five-leaf, mideye, down-low performance. Opt for rubber or urethane bushings, depending on the caliber of performance wanted. What's more, choose the right shock absorber for the desired balance of ride and handling. Mustangs Plus offers standard gas shocks, which yield a smooth ride with good handling. KYB gas adjustable shocks from Mustangs Plus offer a stiffer ride with better handling.

When it's time to fit a '71-'73 Mustang with a new rear suspension system, it's wise to consider Ford's heavy-duty 9-inch rearend if you're planning big horsepower and torque gains. The standard 8-inch rearend can stand up to 350 hp, but not continuously without giving up the ghost. For street and weekend strip use, you'll want a four-pinion 9-inch limited-slip for durability and to get as much torque to the ground as possible. Randy's Ring & Pinion offers the 28-spline (PN YDGF-28-SM) or 31-spline (PN YDGF-31-SM) Trac Loc differential for street and strip use. Because it's made from machined billet steel, it's much stronger than a comparable four-pinion Ford unit.

We're fitting a '71 Mustang SportsRoof with stronger underpinnings in front and back. In front, we've already installed a Grab-A-Trak suspension with 620 coils and gas shocks. In back, we're installing five-leaf, mideye springs with gas shocks for an exceptional ride and moderate handling. As we said earlier, shock dampening determines ride. Because a smooth ride was priority, we opted for standard Grab-A-Trak gas shocks instead of stiffer KYBs. The result will be improved handling and a nice ride.

We began our efforts at Bill Thomas Enterprises, building an N-case nodular iron 9-inch Ford differential with 3.55:1 gears from Randy's Ring & Pinion. We've chosen 3.55:1 gears because the owner is going to install an automatic overdrive transmission behind his gutsy 302ci V-8 mill from Trans Am Racing. 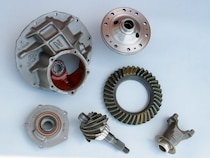 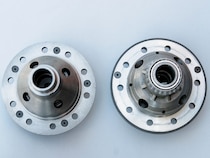 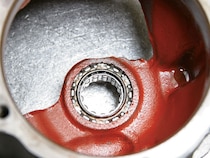