How To Install '05-'07 Performance Springs And Shocks

The up-on-stilts ride height that all late-model Mustangs have leaves something to be desired. Whether it's a Fox-body car, an SN-95, or the new S197 Mustang, they all benefit with the mildest ride-height adjustments.

By mild, we mean a drop of about an inch or so-maybe less for cars that will be driven daily by some of us older folks who might not want the "all hangin' out" look. While some springs lower a car too much, there are brands that go a little ways without going too far.

Shown here are the Steeda springs that provide the mild lowering rather than a radical drop. The Tokico D-spec rear shocks and front struts are fully adjustable over a range of about seven turns with the supplied adjusting tool, visible between the front struts.

It's no secret that the best way to lower a late-model Mustang is to replace its stock springs with a set from the aftermarket. It's also a good idea to augment the swap with a set of top-quality front struts and rear shocks, which often improves the ride and prevents the "baby buggy" effect that sometimes happens when only the springs are replaced.

While we looked in on a spring and strut/shock replacement on a Fox-body 5.0 in our May '05 issue ("How To Install Fox-body Shocks, Springs, and Caster/Camber Plates," p. 66), we thought we'd take another look at the procedure using the latest version of our favorite car. There's a lot of good news here. One of the main things is that on an '05-'07 Mustang, the swap project is notably easier than on the other late-models. Further-more, swapping out the rear springs is a downright snap, taking about five minutes for both sides.

Steeda's camber plates (PN 555-8096) attach to the side of the strut, allowing camber adjustment when a car is lowered. Camber bolts change alignment settings and produce inconsistent handling and tire wear under load.

We don't pull off these how-to articles totally on our own. We typically have a lot of help from a performance shop that knows Mustangs up, down, and all around. For this project, the helping hand came from our friends at JBA Performance Center, a fully equipped shop in the San Diego area. The new, larger location is at the center of the San Diego performance scene and is of the same lineage as JBA Headers.

Not only did JBA have a customer's '06 GT on hand, but the shop had everything in stock, including Steeda springs and camber plates and a set of Tokico D-spec adjust-able front struts and rear shocks. Everything was installed in about three hours. 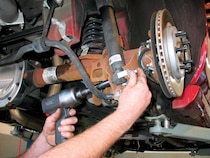 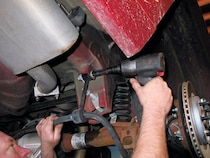 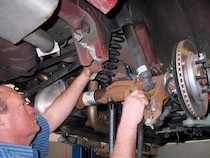 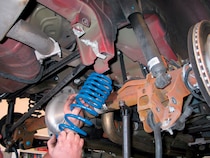 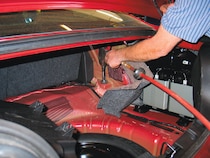 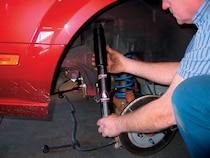