Proper Front-End Alignment Is Key To Handling And Tire Wear 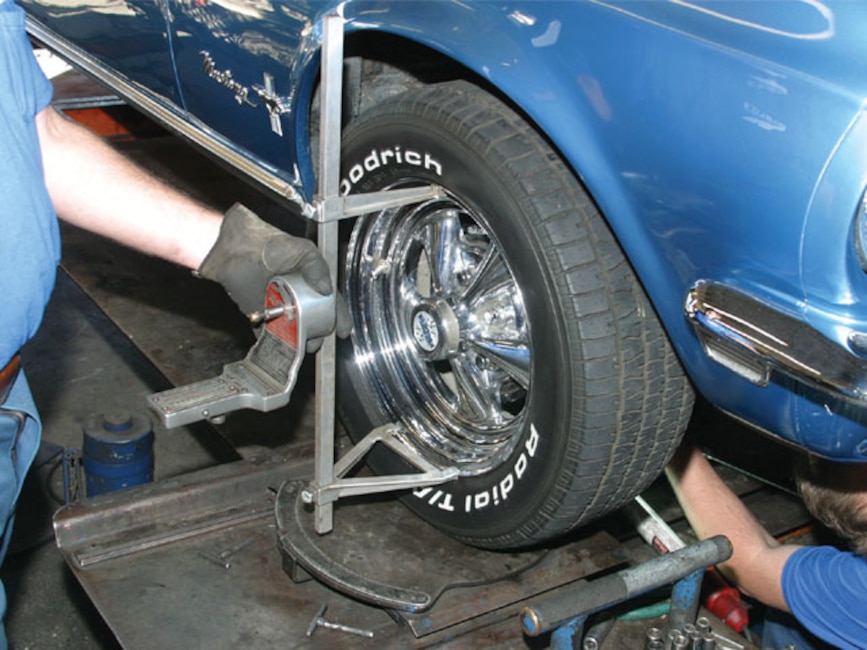 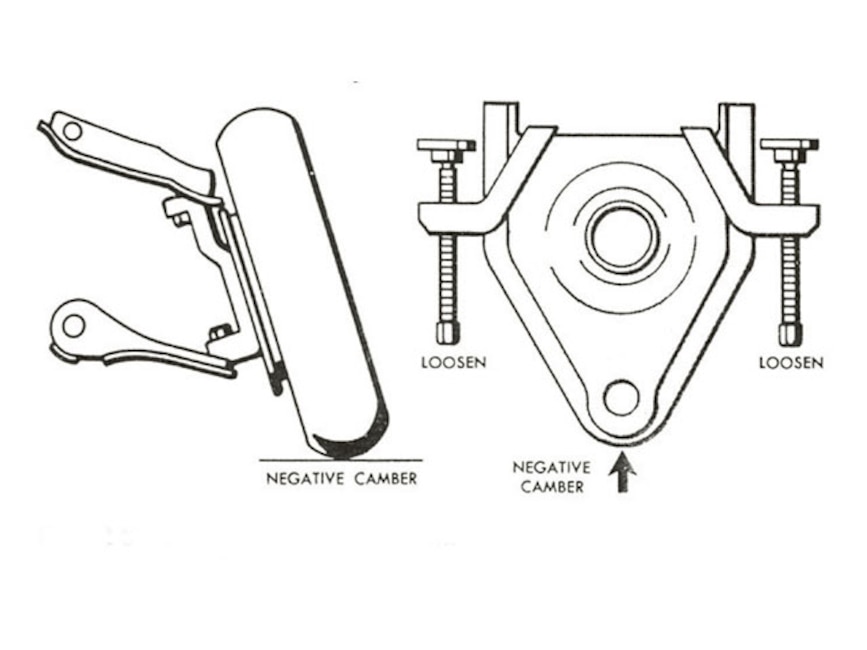 Camber is the angle that both front wheels are tilted at the top and bottom as they roll down the road. This is negative camber, measured in degrees. The top of the tire is pointed in and the bottom is pointed out. Negative camber keeps good tire contact patch on the road in turns. Mustangs do well with 1/4-degree to 1-1/4-degrees. For street use, 1/4 degree of negative camber is best. For road racing, you may want a pinch more negative camber.

For black-magic mystery, front-end alignment is right up there with air conditioning, starter-motor or alternator rebuilding, fuel injection, carburetor tuning, and automatic-transmission overhauls.

Front-end alignment is nothing more than simple geometry: how all four tires interact with both vehicle and pavement. Alignment is an understanding of how the suspension and steering behave as the car cruises down the road. How tires interact with the pavement depends on how they are adjusted when the vehicle is at rest and when we start driving. A Mustang's front suspension behaves differently when cruising straight than when cornering.

First-generation '65-'66 Mustang camber and caster adjustment takes place at the upper control arm using shims. The control arm is moved out via shims; arm angle (caster) is controlled via shims as well.

Alignment shops used to use a bubble gauge mounted on the wheel to adjust camber and caster (spindle angle and wheel attitude). One bubble gauge indicated camber while the other showed caster. Technology has done away with the bubble gauge and brought us laser-guided, four-wheel alignment at most shops across the country. Marlo's Frame & Alignment in Chatsworth, California, still gets outstanding results with the old-fashioned bubble method. The best front-end alignment tool is still a seasoned professional.

Camber can be tricky because it changes as you drive. This is why Ford provided a range of camber to play with. At rest, approximately 1/4-degree negative camber is good for tire wear. If handling is more important than tire wear, you can add negative camber at the sacrifice of tire life.

First-generation '65-'66 Mustang camber adjustment takes place at the upper control arm via shims at the two control-arm attachment points. Add shims to push the arm out toward positive camber and subtract them to allow the arm to move in toward negative camber.

From '67-'73, Ford revised the Mustang's front suspension for easier camber and caster adjustment. Instead of using shims on the upper control arms, Ford went to an adjustable lower control arm. Adjustment is facilitated via an eccentric on each lower control-arm fulcrum. Roll the eccentric to move the arm in or out to change camber.

From '74-'78, the Mustang's front suspension system changed completely to rack-and-pinion steering, with coils and shocks located between the upper and lower control arms. This makes the Mustang II's front suspension more like the '67-'81 Chevrolet Camaro and Pontiac Firebird. The upper control arm on the Mustang II is adjustable, much the same way as its GM counterparts. The upper arm moves in and out to change camber.

In '79, Ford greatly simplified the Mustang's front-end alignment process by eliminating the upper control arm and going with fully adjustable MacPherson struts. To change camber, the strut is moved in and out. The same can be said for '05-'07 Mustangs, which also have MacPherson struts.

What Is Caster?
Caster is spindle angle from top to bottom, or the positioning of the upper and lower ball joints as they relate to one another. If the spindle is tipped forward, it creates negative caster. If tipped aft, it creates positive caster. This controls spindle geometry as the car turns. Think of caster as how the tire/wheel articulates around the axis that connects both ball joints.

Caster is challenging to understand because it's set up based on how the car will be moving at speed. If you could closely study the front tires while they are in motion, you'd notice the tire contact patch is different than when the vehicle is stopped. In motion, the tire contact patch moves rearward, which changes caster. Caster becomes more negative in degrees once we get going. This becomes even more apparent with radial tires, which make the car wander more from side to side. The solution is caster adjustment whenever tire type is changed from bias-ply to radial or vice versa. In fact, it's a good idea to have a front-end alignment any time you rotate or replace tires.

Mustangs like 0 degrees of caster, meaning both ball joints are 12 and 6 o'clock from one another. Ford calls for a minimum of 1 degree of negative caster and a maximum of 1-degree positive with no more than 1/2 degree of variation between the two on V-8 models. In short, caster must be within 1/2 degree from side to side for best results. Six-cylinder models need 0-degrees minimum caster and 2-degrees positive maximum due to the front-end weight difference.

First-generation '65-'66 Mustangs caster adjustment takes place via shims at the upper control arms. Again, shims are added or subtracted to control caster. From '67-'73, the strut rods were adjusted to change caster. The same can be said for '74-'78 Mustang IIs, which also use a strut adjustment to change caster. The Mustang II's strut rods are attached to lower control arms from behind.

Camber is especially crucial for handling because it determines how much contact patch we have. Contact patch, all of the tread on the pavement, is what enables us to cut apexes without winding up in the weeds.

For '79-up, caster adjustment happens via MacPherson strut movement around the top caster/camber plate, making alignment a cinch for late-model fans.

What Is Toe?
Although most of us think of toe as those piggies on the ends of our feet, toe takes on a different meaning with cars. Toe is the last adjustment checked during front-end alignment. As its name implies, toe-in is the angle of the front wheels as they relate to a car's longitudinal axis.

Toe is adjusted at each of the tie-rod end assemblies in the steering linkage. When adjusting toe-in, you are adjusting each front tire's attitude as they relate to each other. Proper toe adjustment begins with the steering wheel at dead center, exactly in the center of lock-to-lock travel. If your steering gear is three turns from lock-to-lock, steer all the way left, then clockwise back 1-1/2 turns to center. Once the wheel is centered, lock it in the centered position during toe-in adjustment.

When measuring toe-in, first determine the distance between the right and left tire sidewalls (or rims) with the wheels straight ahead. Measure front and rear distances, and do the math. Toe is always set as toe-in, with both front wheels pointed a pinch inboard to allow your Mustang to stay on course and make light work of steering wheel return-to-center. When steering wheel return-to-center is sluggish, it's usually a toe-out problem.

If the car wanders right or left, toe and caster are the biggest suspects. Sluggish steering wheel return is typically due to inadequate toe-in; aggressive steering return is too much toe. Tire scrub in turns is most likely too much positive camber; excessive inboard tire wear can mean too much negative camber.

Another item is component wear. Never approach a front-end alignment until you have checked all the components for wear. Excessively worn ball joints allow camber and caster adjustment to go right out the window the minute you hit the road. Worn tie-rod ends allow toe-in to wander. What's more, worn-out components are dangerous.

This is the Fastrax camber/caster gauge from The Eastwood Company. Easy to use with detailed instructions, the Fastrax gauge enables you to set camber and caster adjustment on your garage floor. If you're lacking confidence on this one, visit a trusted alignment shop afterward to have your work checked.

This is the same kind of bubble camber and caster gauges the pros use. We like this one because it's easy to read and easy to use. Lock it to your front wheels using the adjustable thumb wheel. Make sure you have your Mustang on a proven level surface, otherwise, readings will be erroneous.

Here's the Manco alignment gauge for toe-in. With a helper close by, you can set toe on private concrete just like professionals.

Proper wheel-bearing adjustment is also important. Loose or maladjusted wheel bearings will throw off front-end alignment. Make sure the front wheel bearings are properly packed, installed, and adjusted. Spin the brake drum/rotor and torque the adjusting nut to 15-20 ft-lb. Spin it again and feel for tightness. If the rotor is hard to turn, loosen the nut and spin it again. By loosening the nut, you're allowing the bearings to seat properly; torque to 15-20 ft-lb and check again. The rotor should spin smoothly. Slowly back the nut to where you have cotter-pin hole alignment. Torquing the nut to 15-20 ft-lb firmly seats the bearings. Loosening the nut to secure the cotter pin takes the load off the bearings.

Front-End Check
Front-end alignment is pointless if you're dealing with worn-out components. Upper ball joints don't live as long as lower ones. In fact, lower control arms generally last twice as long as upper arms. As a rule, you should replace both at the same time.

Eastwood's Home Alignment
The Eastwood Company now makes it possible to perform a front-end alignment in your home garage. You need only two tools to perform alignment: the Fastrax camber/caster gauge from Pole Position Racing & Rod Products and the wheel alignment gauge from Manco Products. As its name implies, the Fastrax camber/caster gauge enables you to set camber and caster. All you have to do is roll the car back and forth once adjustment is made. Then, check camber and caster again to confirm adjustment.

The Manco wheel alignment gauge is for setting toe-in, which makes light work of front-end alignment. All you have to do is center the steering wheel and get to work underneath.

All front-end alignment work must be done with the full weight of the vehicle on the tires. Never perform a front-end alignment with the wheels off the ground. Again, when you set camber and caster, roll the car back and forth to stabilize adjustment, then check again. A road test is the final confirmation of your performance.