Miles Cook
January 20, 2006
The Hellwig front (PN R-6705) and rear (PN R-6805) antisway bars for '05-'06 Mustangs come with much of the attachment hardware. Several pieces already on the car are reused; between that and what's included, everything you need to install them is at hand. Furthermore, the front and rear bars are available separately. For example, you could install just the 1-inch Hellwig rear bar on a V-6 car to augment the existing front bar, while the 15/16-inch Hellwig front bar on a GT will work with the existing rear bar. For GTs or V-6s, installing both Hellwig front and rear bars replaces both stock bars on a GT, and adds a rear one to V-6s which come from the factory without a rear bar.


With the '06 Mustangs already on sale, upgrades for them are coming onto the scene like wildfire. Engine, drivetrain, interior, and suspension are just a few of the areas receiving unprecedented attention from the aftermarket-more so than just about any other new car today.

The underpinnings in the '05-'06 Mustang are fine and dandy in stock form, but Hellwig Suspension Accessories improve on a good thing with its easy-to-install front and rear antisway bars. In addition to adding considerable girth over the stock pieces, the Hellwig bars are also a big upgrade for V-6 cars like our '05 subject vehicle. That's because V-6 Mustangs don't come with a rear antisway bar, so the addition of the rear Hellwig bar is a nice update on these entry-level Mustangs.

Even for V-8-powered GT models, the Hellwig bars are worthy of consideration: Among other reasons, they're so easy to install. We were in and out of Prevention Auto Care in about two hours thanks to easy installation.

The bars are available from California Mustang, who-like several other Mustang parts houses-are wise to the fact that the S197 Mustang is probably the hottest new car on the market today. 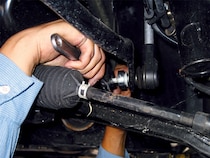 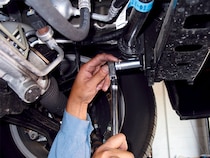 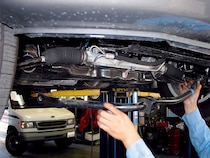