Modifying our Mustangs often involves trade-offs: adding top-end horsepower could sacrifice low-end torque, a high-flow exhaust may bludgeon your eardrums, and a stiffer suspension can be just that--stiff.

Well, not so fast. After installing a Maximum Motorsports coilover suspension on an '03 Mustang Cobra, we're rethinking that last assumption.

Conventional wisdom states that installing stiffer springs will make your Mustang ride more harshly. The notion that dramatically increasing the spring rate will destroy ride comfort is akin to getting a "free lunch." However, our Maximum Motorsports coilover conversion increased handling without the usual side effects.

How is this possible? A coilover conversion increases wheel rate and improves ride quality by eliminating friction in the suspension. A '79-'04 Mustang's "modified MacPherson strut" suspension squeezes the spring between the control arm and the frame rail. This was most likely done for packaging and cost reasons, however, this arrangement puts a lot of force on the control arm bushings and ball joint.

Along with matching Maximum Motorsports "Sport" shocks and struts, we installed 400-lb/in front and 650-lb/in rear coilover springs. We set our ride height about 1 1/2-inches lower than stock in the front, and 2-inches lower in the rear. Even with a wheel rate about twice that of the stock springs, we felt virtually no increase in ride harshness!

Overall, we were extremely impressed with the ride quality and handling (despite it having the wheel rate of a Grand-Am professional road racing car) after installing the Maximum Motorsports coilover kit. The springs felt perfectly matched the Maximum Motorsports "Sport" dampers, which made the car feel more controlled and "tied down" through turns and over bumps. The steering felt lighter and more accurate, thanks to less ball joint friction (earlier cars that don't have "low friction" ball joints will benefit even more than we did). Due to their continuous development from racing experience and customer feedback, the quality and attention to detail in the Maximum Motorsports parts and installation instructions was impressive. Let's get started!

When a coil spring is installed around a telescopic damper, it's referred to as a "coilover." A conventional MacPherson strut is a coilover.

A conventional strut consists of a body housing the damper piston and fluid, with the shaft extending out the top of the body. The shaft carries the suspension's bending forces and damper forces simultaneously.

An "inverted strut" is a conventional strut that's inverted, with the shaft encased in another tube and a guide bushing at the top. It's stronger because the suspension's bending forces when cornering are carried by the large damper and mounting body bushings, leaving the thinner damper shaft and smaller bushings to carry the damping forces. This minimizes friction and alignment changes. 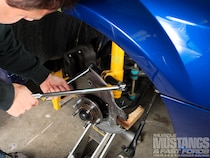 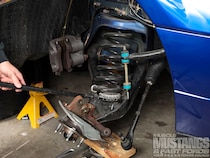 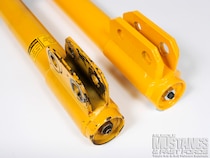 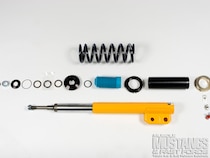 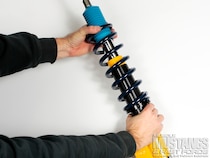 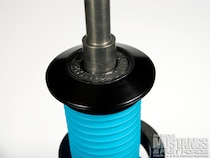 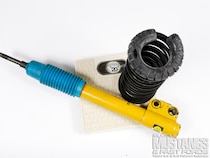 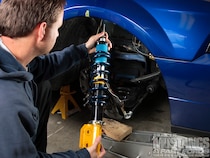 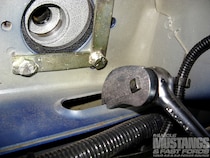 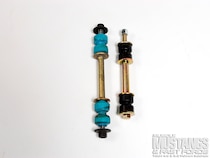 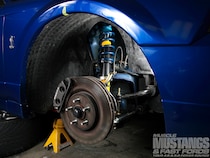 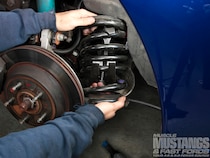 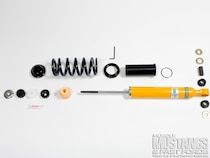 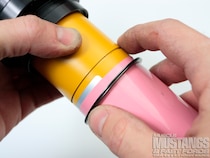 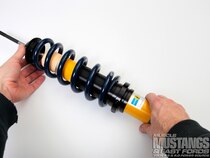 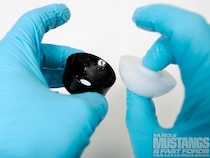 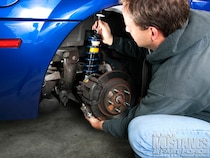 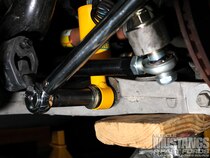 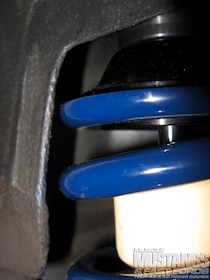 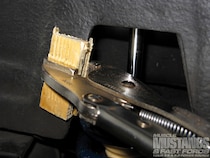 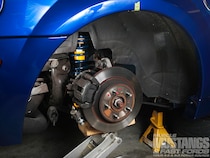 Here's a shot of the car with the stock ride height, and the new stance after lowering 1-1/2-inch in front and 2-inch in back.