We improve the handling and ride of an S197 with a Watt's Link rear suspension kit. 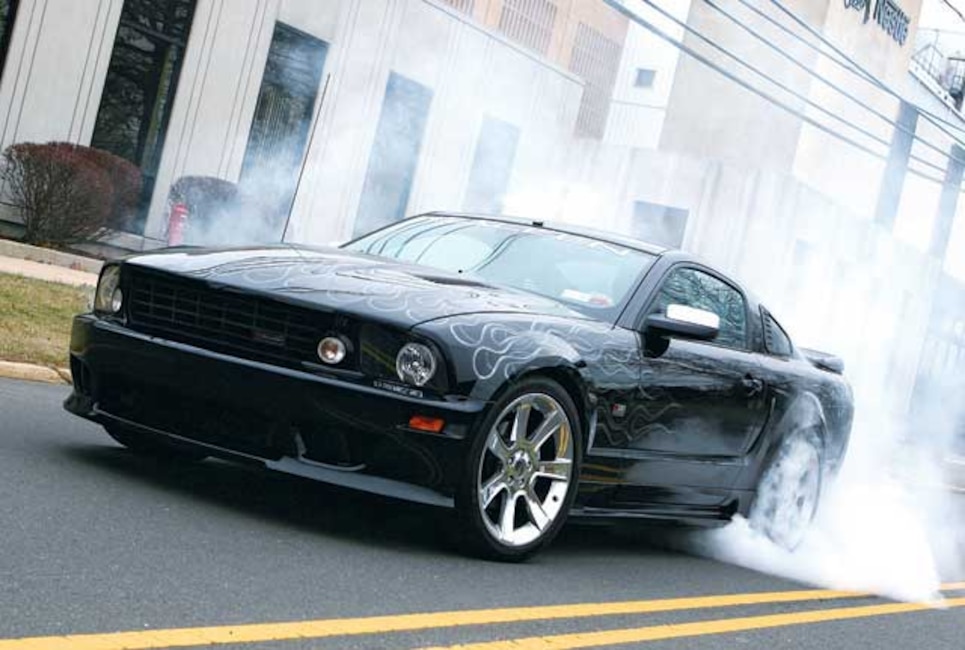 With all of the hype surrounding the Watt's link suspension kit from Saleen, we decided to pay a visit to JDM Engineering and see what was up. The results were impressive. 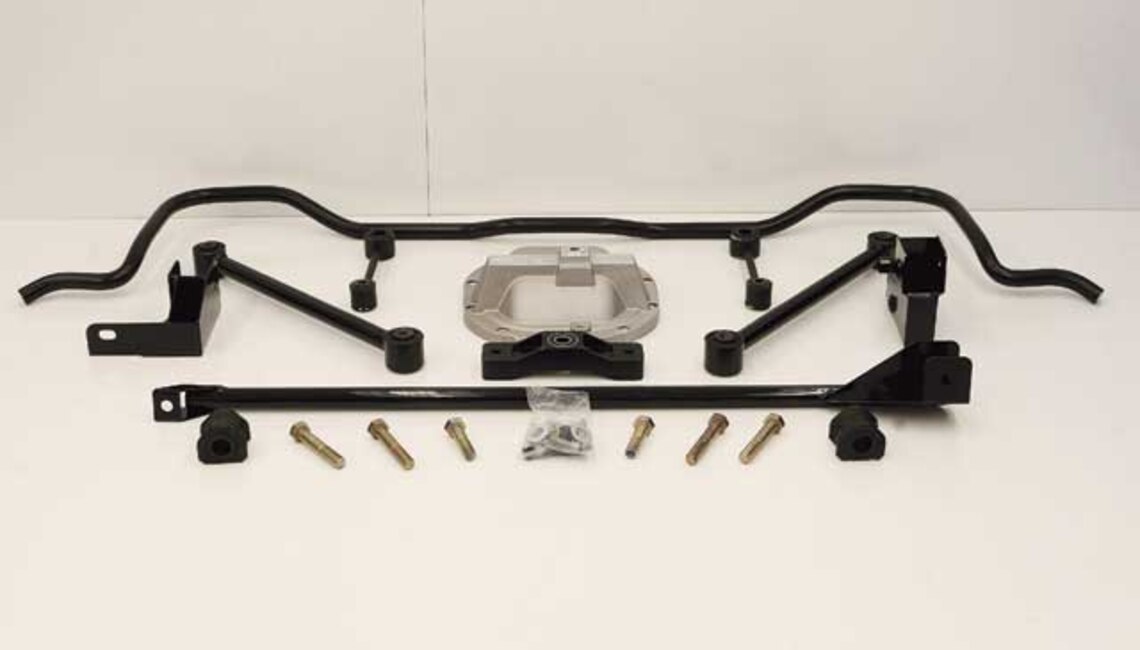 The Saleen Watt's link kit seen here comes complete with a new differential cover, a pivot point, two link arms, a new rear brace, and a larger sway bar. All of the Watt's link kits that come from Saleen are red. If you want the black powdercoated kit seen here, you'll have to call JDM Engineering. 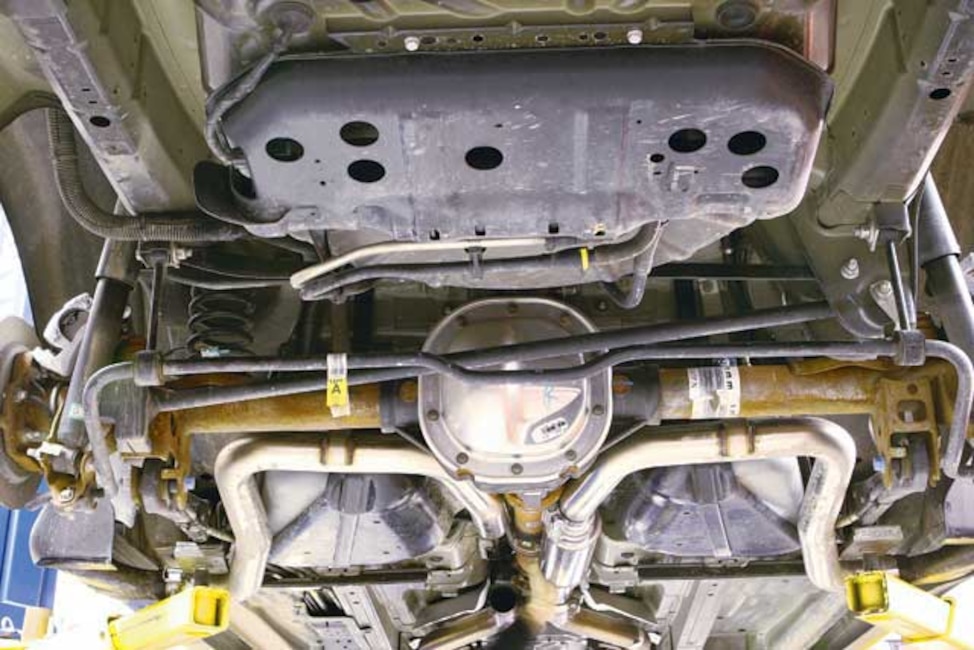 A stock S197 Mustang has a three-link suspension system complete with a Panhard bar. While this is good, the Panhard bar does have its limitations in keeping the rear centered when under hard cornering. To improve the handling of one lucky S197, we set about switching over from the stock setup to a Watt's link suspension. 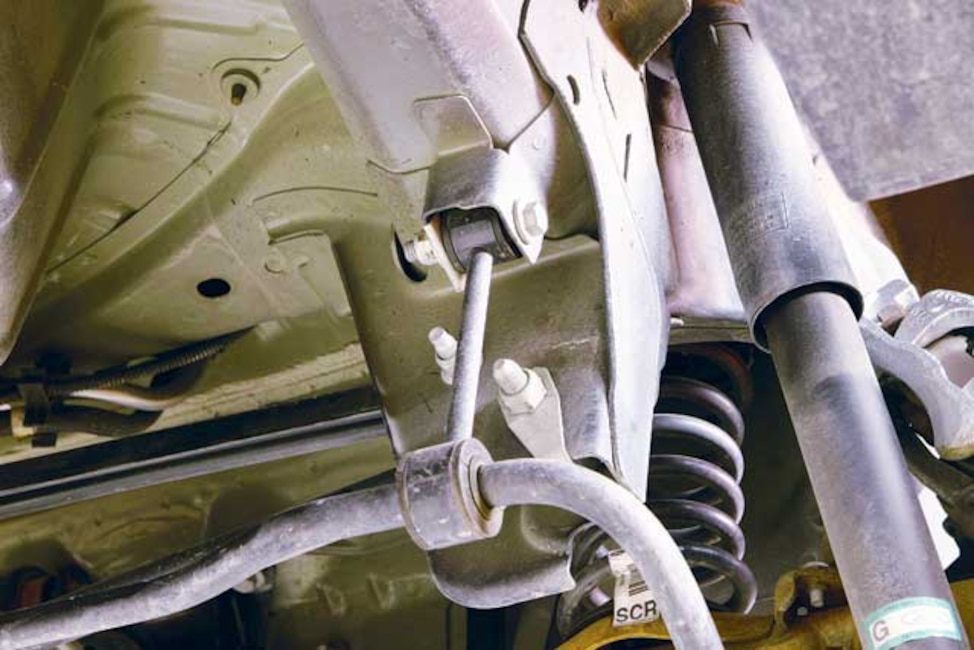 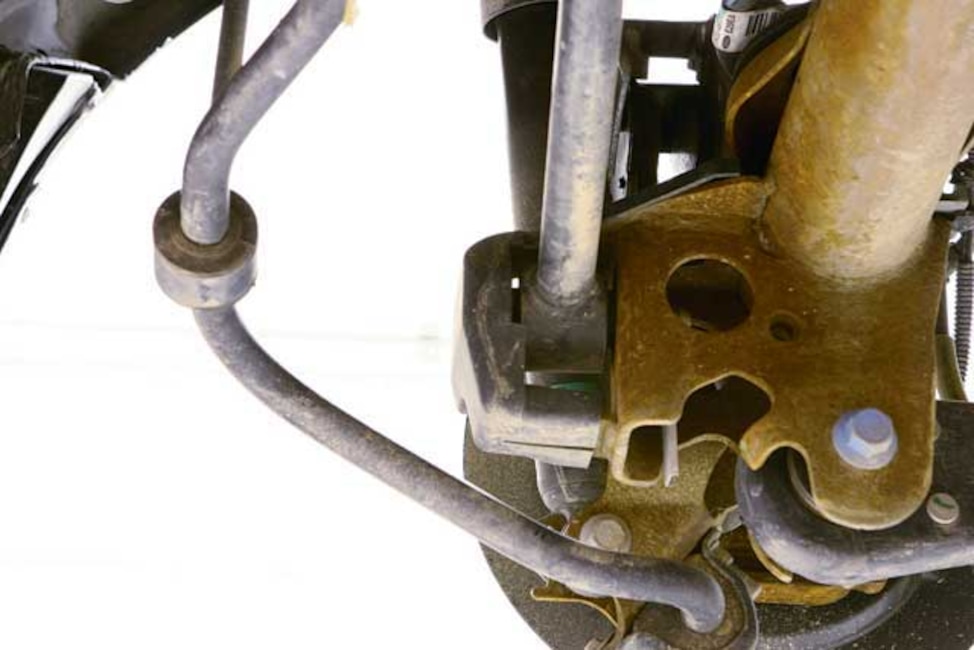 The Panhard bar connects to the frame on the passenger side and to the rear on the driver side.

It has been a long day at work, and you relish the fact that when the clock strikes 5:00 p.m., you'll be punching out and heading home. Making the drive a bit more tolerable is knowing that sitting in the parking lot is a thundering S197 Mustang. On the way home, you get a bit frisky and take an off-ramp at a higher-than-posted speed. The car settles into the corner nicely, and you're cutting it with precision. That is, until the rearend hits a slight blemish in the road and the rear skips out just a bit, forcing you to swing the wheel in the opposite direction, roll out of the throttle, and realize that when you get home, a change of underwear will be needed.

With the advent of the S197 Mustang came a 300hp Three-Valve engine, some killer good looks, and as far as the rear suspension was concerned, a three-link, live-axle setup with a Panhard bar. While this is great for a factory car, when it comes to handling and cornering, the factory setup has its limitations. To improve performance on our S197, we cruised over to JDM Engineering in Freehold, New Jersey, to modify the standard three-link rear suspension setup with a Saleen Watt's link.

As just mentioned, S197 Mustangs roll off the assembly line with a live axle in a three-link design. A three-link suspension locates the rearend on three different points: two on either side of the rear and one at the top of the housing.

Part of a three-link's advantage is that there are many different variations as to where the links are placed. With each different link placement comes a different set of handling characteristics. In addition, a three-link is more compact than a leaf-spring (or four-link) design.

The disadvantage of a three-link is that it needs something to locate the rear axle laterally. On the S197 Mustang, this piece is the Panhard rod, also known as the Panhard bar, or in NASCAR speak, the track bar.

A Panhard bar is the component of the rear suspension that provides lateral location of the rear axle. It was invented by the Panhard Automobile Company of France in the early 20th century and has been used in many different applications since its first iteration. It's a rigid bar that runs from one side of the car to the other at the rear axle. The bar is attached on either end with pivots that enable it to swivel up and down, thus allowing the axle to move in a vertical plane only. One end of the Panhard bar is connected to the axlehousing, while the other is attached to the chassis. The length and position of the Panhard bar is what determines movement, and in a sense, handling, of the rearend.

When you tune into a Sprint Cup race and hear crewchiefs comment about raising or lowering the track bar, they're discussing using the Panhard bar to make the car handle properly in the corners. By either raising or lowering the Panhard bar, they're changing the range of motion of the rear axle, thus increasing or decreasing an understeer (push) and/or oversteer (loose) condition. While these expensive cars have adjustable Panhard bars, your street Mustang does not. When compared to a Watt's link-style suspension, the Panhard bar, as well as the Watt's link, has advantages and disadvantages. Before we get to that, however, let's see exactly what is a Watt's link.

A Watt's link suspension is a complex system that utilizes a pivot and more solid attachment points on the rear axle to keep the housing from moving side to side when cornering. Carlos Duran of Saleen gave us the scoop on the Watt's link. "With this setup, the Panhard bar is removed and replaced with the Watt's link. The Watt's link bolts on the passenger side to the stock Panhard bar mounting point, and on the driver side to an added mount. In the middle, it's mounted to the differential cover."

This type of suspension is used predominately in Trans Am racing, and more recently has been installed on the Saleen/Parnelli Jones Mustangs. The Watt's link helps to give the axle a better roll center. When it comes to roll center, there are two definitions. The one commonly used is the geometric, or kinetic, roll center, while the other is a force-based definition pioneered by the Society of Automotive Engineers (SAE).

We started our disassembly by loosening up the sway bar end links, followed by the removal of the sway bar.

With the sway bar out of the way, we took off the Panhard bar cover, then undid the bar from both sides.

We had easy access to the underbody brace. Seeing as how this had to come out as well, we set about doing it at this time.

We loosened up the stock differential cover, drained the rear fluid, and removed the diff cover.

Before bolting parts and pieces to the car, we put the sway bar bushings and sway bar end links on the new sway bar.

If you were the one in the opening paragraph who had to change his underwear after the off-ramp excursion, it's because the Panhard bar and its ability to center the rear while moving up and down was overcome by, say, the right-side tire hitting a bump and causing the rear to move sideways at the same time. With the Watt's link, the roll center is lowered and the rear movement is more fluid. The Watt's link allows the rear to stay centered better under hard cornering, which makes the car's handling much more predictable.

As with everything else, however, both the Panhard bar setup and the Watt's link have their pros and cons. To get a better feel for both rear suspension styles, we sat down with Duran. As we mentioned previously, Saleen offers the Saleen/PJ car with a Watt's link suspension standard, and it's the one we installed on our subject Mustang.

"The Panhard bar is an easy and cheap solution for the large manufacturer, but it greatly compromises the rear axle," Duran says. "The Watt's link allows the cornering forces to be consistent under all circumstances, making the car very predictable as it's mounted in the middle of the axle, offering the same characteristics in either direction, left or right. The difference is big enough to change the car from having an understeer condition to a more neutral one, just by changing to the Watt's link." Saleen also changes the rear sway bar to a stiffer, 24mm-diameter piece for better balance.

To see what all the hub-bub was about, we decided to check out a Watt's link install. Our cruise to JDM Engineering yielded us not only an '06 Mustang for a test subject, but a Saleen Watt's link suspension kit as well. JDM is a Saleen distributor, as well as its East Coast warranty shop, so JDM tech Craig Silverman handled the install for us. The kit replaces the factory setup with a host of upgraded parts and pieces specific to a Watt's link suspension system. It comes with a reinforced rear differential cover, a billet-aluminum pivot, steel control arms, an upgraded sway bar, and high-durometer bushings.

Jim D'Amore of JDM Engineering also clued us in to a couple of other differences between the Saleen kit and the stock rear suspension system. "First of all, Saleen offers the kit powdercoated in red, but we're the only ones that have a black powdercoated version, which Saleen makes for us," he says. "Secondly, the Saleen sway bar is approximately 0.050 inch thicker than the stock rear sway bar. Finally, the rear differential cover is a meatier piece. It's a thicker aluminum casting as opposed to the stamped factory differential cover. It also has the pivot point for the link bars."

The install was a breeze and took less than two hours. We learned a few things along the way, too. First, the hardware for the Panhard bar and the underbody brace were reused. When removing the bolts, however, make sure you either take a digital photo or mark each bolt with tape, identifying where the bolt went and in what direction, as this is a critical part of the install of the Watt's link. Secondly, once all of the components are on, lower the car to the ground and tighten the link arms to their proper specs. Doing so while the car is on the lift without a load on the suspension causes the car to sit awkwardly and, more importantly, not perform well.

Once all was said and done, the car handled much better and the ride was slightly smoother. We say slightly because we did go for a ride on local, pothole-filled New Jersey roads.

Guess you can say that, thanks to the Watt's link, our test car's handling is on the ball.