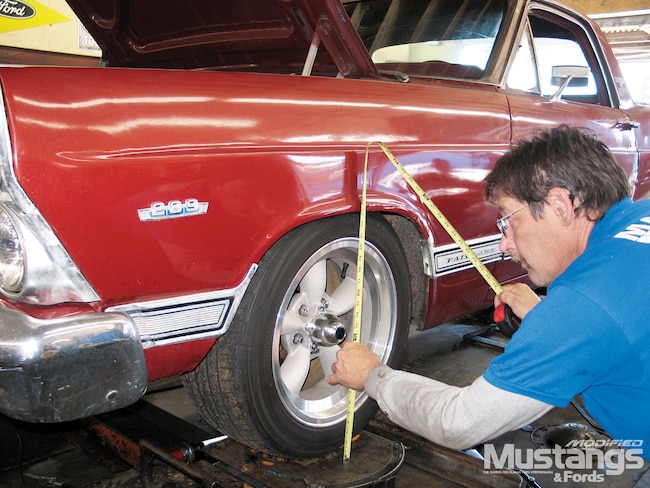 Frontend Alignment
Everybody knows that when you buy a new set of tires one of the most important things you can do is to have the vehicle alignment checked. Suspension settles over the years, ball joints wear and tie rods can become bent or come out of adjustment. We've seen instances where a new set of tires has been damaged in as little as 100 miles because they were driven on after installing replacement suspension components but before checking vehicle alignment.

Indeed, the cost of an alignment is modest compared to the cost of tires, but there are other considerations involved. One of the most obvious ones is vehicle performance and safety. A bad alignment can leave you struggling to maintain lane control at freeway speeds, and a small amount of input results in the car lurching to one side or the other.

At the same time, an incorrect camber setting can leave you squealing through the most modest of turns. If your car shows any of these symptoms or if your vehicle alignment is an unknown quantity then checking your frontend for all the right specs is one of the best things you can do from both a vehicle safety and tire longevity standpoint. Another consideration is that a correctly aligned car is a pleasure to drive. Since the classic Ford vehicles we're interested in don't have four-wheel independent suspensions we won't discuss rear alignment except to say that similar considerations are involved.

If you've got several cars or are constantly changing alignment on a favorite because you alternate between street use and track use then the ability to check and adjust alignment at home or at the track can be a great asset. Fortunately, tools suitable for personal use are now available to check your classic Ford vehicle's alignment.

To begin our alignment lesson we ventured out to Marlo's Frame and Alignment in Canoga Park, California. There we were able to take advantage of Marlon's years of experience as he explained the ins and outs of front suspension alignment. Marlon doesn't have a laser-guided rack but rather uses old-school expertise and tools to align his customers' vehicles. As you will see, the tools he uses are similar to ones you can buy to attend to your alignment needs. After we go over an alignment procedure with him to get down the basics we'll also have a look at some of the vehicle-alignment tools available from the Eastwood Company. 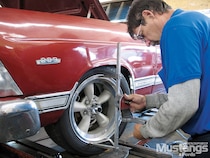 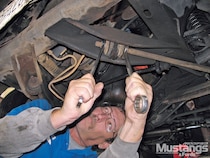 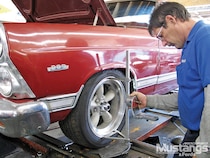 The best way to visualize caster is to picture a shopping cart caster. The pivot of this type of caster, while not at an angle, intersects the ground ahead of the wheel contact patch. When the wheel is behind the pivot at the point where it contacts the ground, it is in positive caster. Picture trying to push a shopping cart and keep the wheel ahead of the pivot. The wheel will continually try to turn from straight ahead. That is what happens when a car has the caster set too far negative. The factory caster setting for classic Ford cars calls for a small amount of positive caster.

The third dimension of our alignment is the toe measurement. This is the difference in the center to center distance between the front of the tires and the back of the tires. It is measured in fractions of an inch and is usually set close to zero, which means that the wheels are almost parallel to each other. Toe-in means that the fronts of the tires are closer to each other than the rears. Toe-out is just the opposite. An incorrect toe-in setting will cause rapid tire wear. For racing purposes, toe-in is subtracted or eliminated to aid quicker response when cornering. However, a vehicle aligned this way won't be much fun to drive on the freeway.

Bushings: Stock Versus Modified
It's a fact that when Ford designed the original suspension many important moveable junctures or pivot points had rubber bushings as original equipment. Both upper and lower control arms were attached to the car using a bushing with a steel center and a rubber jacket. While the rubber dimension of these components reduced vibration and promoted a smoother ride, after a certain amount of time these bushings would begin to compress and come out of round. In addition to losing the correct alignment adjustment, a certain amount of play was created, allowing the component to move around freely-not the best of circumstances for correct vehicle alignment or concise steering. Now there's a great bolt-in alternative from Fly-Ford Racing that gives a near-stock appearance without any suspension or frame modifications.

Check out this 1967 Ford Fairlane that is influenced by Hot Rod Craftsman Bobby Alloway. Don't miss out on the details of this Patron of the Arts.

There's nothing low profile about this 1967 Ford Fairlane. Click here for more details or check out the August 2012 issue of Modified Mustangs & Fords Magazine.

This 1967 Ford Fairlane 500 XL is costume built to perfection. It has been modified to sport both elogance and performance. Modified Mustangs & Fords Magazine

You can't have a classic car without having good sound in it. For this reason we took this 1967 Ford Fairlane and decided to install the new Custom Autosound SecretAudio System for a magnificent sound system! - Modifed Mustangs & Fords