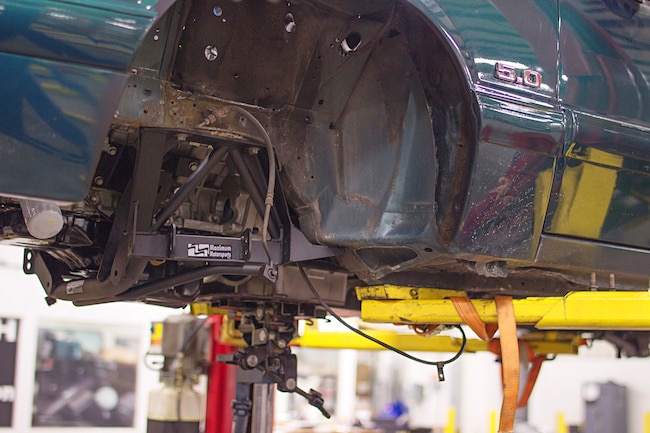 There is no better way to learn about the importance of certain aspects of a car than throughout the process of building one. While building my first race car, I began to understand just how important the correct suspension system will be to the final outcome of my build.

Before the project even began, we enlisted the help of Maximum Motorsports to provide their “Launch Box” suspension (with several extra parts thrown in or replaced to fit my application) to prepare the 1992 Mustang LX, I call Roush Fox for a season in the NMRA drag racing series. Roush Fox was to be equipped with a 2012 Coyote engine topped with a Phase 2 Roush Supercharger, so suspension was critical to the performance of the Fox on the dragstrip.

Not only was I excited to be able to get the Roush Fox outfitted with a whole new performance suspension system, but it was awesome to work with the guys at Maximum Motorsports. They are insanely knowledgeable about the product, and always available to answer questions. My suspension system was installed by Chris Gardner at Roush Performance, so we were lucky to have access to a lift and all the tools that we would need.

There are a number of different packages available from Maximum Motorsports to fit just about any build parameters. When I spoke with Maximum Motorsports’ Jack Hidley before the build began, I explained to him that I wanted a Mustang that would primarily dominate on the track, but could be pulled out of the garage and driven to a nearby car show on the weekends, or to work on a sunny day in the short Michigan summer. As the build went on, a lot of details and plans shifted, but this goal remained the same. Jack recommended the Launch Box, a step up from the capabilities of their Street & Strip Box for a more track-centric experience.

To suit our application, Maximum Motorsports switched the included Hyperco Front Springs (200 lb/in, 12-inch, 2-1/2-inch diameter) for ones with a 150 lb/in spring rate, 14-inch free length, and a 2.5-inch diameter. They also traded out the included rear swaybar for a larger one (MMRSB-6.1), and sent over MM front control arms. The included front coilover conversion kit will allow for adjustability and weight-savings, while the panhard bar and torque arm will improve rear tire bite while eliminating the upper control arms and the need for upper torque box reinforcement. The adjustable rear sway bar exists to reduce body roll during launch, while an NHRA-legal roll bar adds stability and safety without sacrificing street manners.

A few other parts, like an MM Coyote-swap K-Member and Hybrid Steering Shaft, were also sent our way to help us complete the build.

When we got started, the Fox was in desperate need of a suspension overhaul. With the stock suspension and some blown-out aftermarket shocks in place, there was no way the car was going to perform with the supercharged Coyote engine in place. It just wasn’t going to cut it.

Our system came in a series of boxes, so we laid everything out on a cart to take inventory before the installation began. The guys at Maximum Motorsports stressed the importance of reading all of the included instructions, and following them in their entirety. The website was helpful too; these guys really know their product, and explain it well.

The Roush supercharged Coyote was bolted to the Maximum Motorsports K-member (MMKM-2.1) and lifted into its resting place in the engine bay.

Maximum also sent over a Hyperco barrel-shaped coilover Springs (HYP15014250UHT) with the MM front coilover Kit (MMCO-2) and a spanner wrench for installation and adjustment. These springs feature a 150 lb/inch spring rate with 14-inch of free length, a 2.5-inch inside diameter, and 10.28-inch of travel before coil bind. Additional clearance prevents threads on the strut body from contacting the spring.

Tokico adjustable D-Spec Shocks (DE3723) and Struts (DB3026) are part of the Damping Specific series. These shocks and struts provide a large adjustment range, making them the ideal choice for any type of driving activity. A single adjustable knob at the top of each strut and shock will allow us to control the D-Spec dampers’ variable-aperture bypass to adjust rebound and compression damping simultaneously.

Maximum Motorsports caster/camber plates (MMCC9093) were installed along with the coilover suspension to properly align the Fox’s front tires. The plates allow for the adjustment of the car’s caster (for straight line stability, an important detail in a drag setup) and camber (negative camber is caused by lowering, creating wear on tires).

Drag racers seem to have mixed feelings on the use of torque arms, but we know that the Maximum Motorsports heavy-duty torque arm (MMTA2) will allow for vastly-improved traction both in straight-line situations and when exiting corners on the street. Basically, the torque arm will convert the Fox’s four-link design to a three-link type, eliminating the rear upper control arms. In the stock system, rear upper control arms control both axle wind-up and locating the axle side-to-side. The torque arm takes over the job of controlling axle rotation, and MM’s panhard bar takes on the sole job of locating the axle. This allows the lower control arms to take on the primary job of thrusting the car forward under acceleration.

As stated above, the MM panhard bar (MMPBA) provides lateral location of the rear axle. Often referred to as the Mustang’s missing part, the panhard bar was left off of 1979-2004 Mustang models. Installing one on the Fox will provide dramatic and noticeable changes to unstable and unpredictable behavior commonly caused by “rear-steer” or the axle movement that causes the rear of the car to steer itself.

The H&R Super Sport Rear Springs (51650-rear) chosen for the project lowered the Fox to a comfortable height, and will help to reduce brake dive and body roll on the road.

While the Fox isn’t going to be seeing any sharp corners, these springs have lowered the center of gravity to aid handling and quicken steering response as well.

Maximum Motorsports’ adjustable rear lower control arms (MNMRLCA-34.1) work hand-in-hand with the MM rear adjustable swaybar. These control arms will comfortably handle up to 1,000 lb-ft of torque at the rear wheels, and will be able to handle even more power given the inclusion of the torque arm. It will also provide the ride height adjustability for the ultimate launch off the line, and is robust enough to handle that power when we finally replace the current drag radials with slicks. Chris installed the urethane end caps into both ends of the control arms before bolting it onto the chassis.

The stock swaybar mounts to the lower control arms, but the MM Adjustable Rear Swaybar (MMRSB-6.1) mounts to the axle to act directly on the chassis through end links made of spherical rod ends. We’ll be able to make adjustments in the swaybar rate by simply changing the position of the end links on the arm of the swaybar, increasing it to about 900% stiffer. It measures 1.25- x 0.25-inch and is 800% stiffer than the stock early Mustang swaybar when set on full soft.

Maximum Motorsports full-length subframe connectors (MMFL-5PC) were welded in to stiffen the Fox’s chassis and allow for improved ride quality and performance. The subframe connectors tie the front and rear subframe together to keep high amounts of torque from twisting the unibody. They fit flawlessly under the body, and will help to keep the body straight and solid with the amount of power that we’ll be putting to the ground.

We had our Maximum Motorsports six-point drag race roll bar (MMRB-2) powder coated in textured black to fit with the theme of the car. We removed the interior panels, seats, and carpet to bolt in the NHRA-legal bar, complete with harness brace and swing-out bars (perfect for those street drivers).

We brought the Fox out to the 2016 NMRA World Finals at Bowling Green, Kentucky and rain kept me from getting any practice runs in before qualifying. When we finally got her on the track, braking issues caused us to launch from idle, but the Fox went straight as an arrow down the track, felt solid and stable, and trapped a 10.6-second quarter-mile at 128 mph. With a smaller pulley, a bit more boost, and a good clean launch this season; we can’t wait to see how the Maximum Motorsports Launch Box handles whatever we throw at it.