Chassis Flex Is A Thing Of The Past In Project ’70 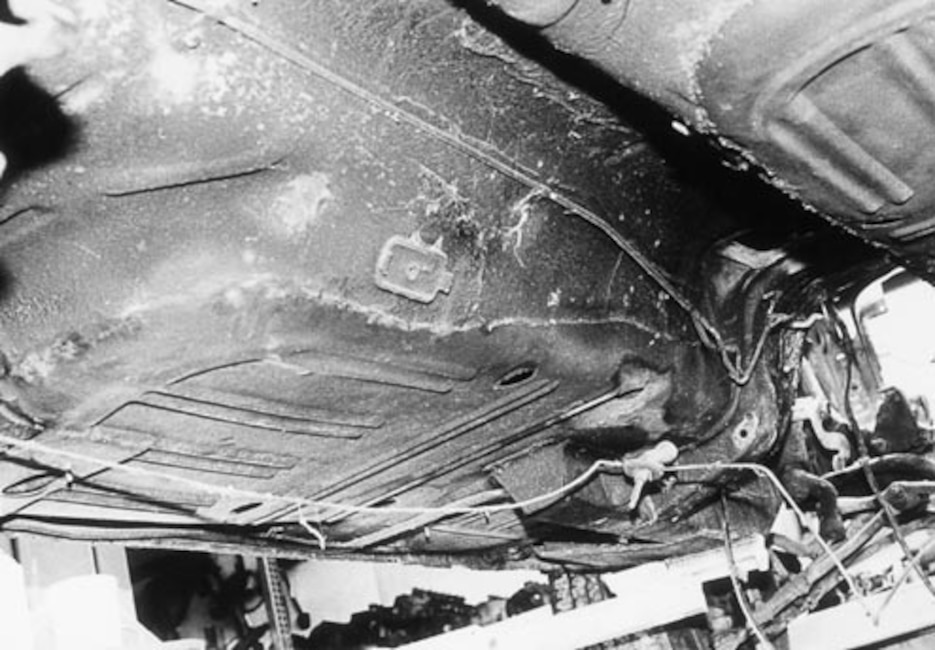 Here you see the object of our affection, from underneath. Look closely. Can you see the welds from where the floorpans were replaced? Would you want to spoil these floorpans by cutting them? Well, we wouldn’t either. 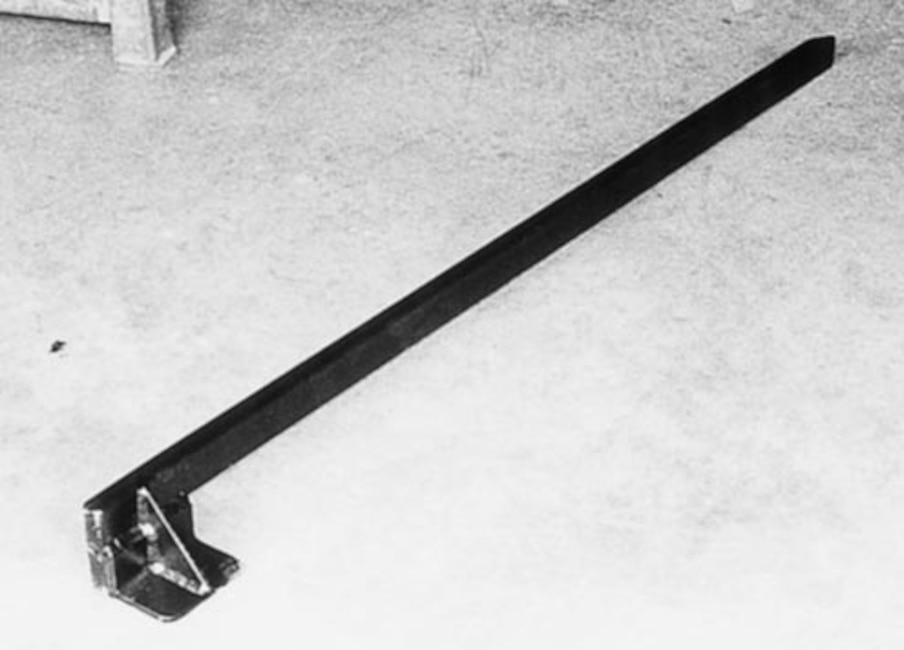 This is what the rail looks like after it’s been readied for the car. It appears to be well made and is quite a handsome piece of work. The welds are very neat and the gusset appears to be well braced and sturdy. It has been painted black for protection from rust and for appearance’s sake. This is the driver-side rail. There is one for the passenger side also. 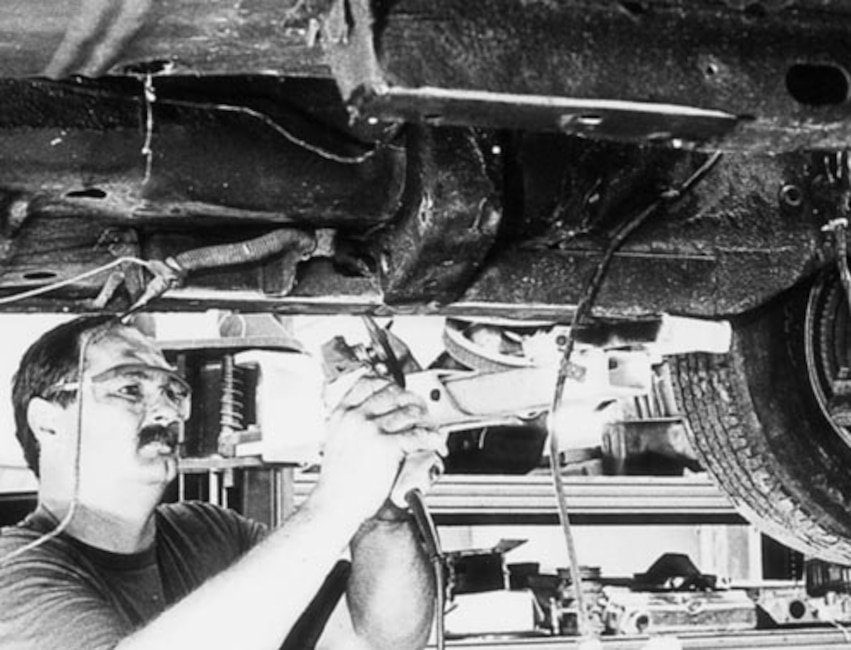 Allen Shepley is cleaning the driver-side front subframe. He will clean it to bare metal for about 16 inches, since the rail will extend over the subframe by that amount. It’s important to clean these areas well, and we’ll show you why later. 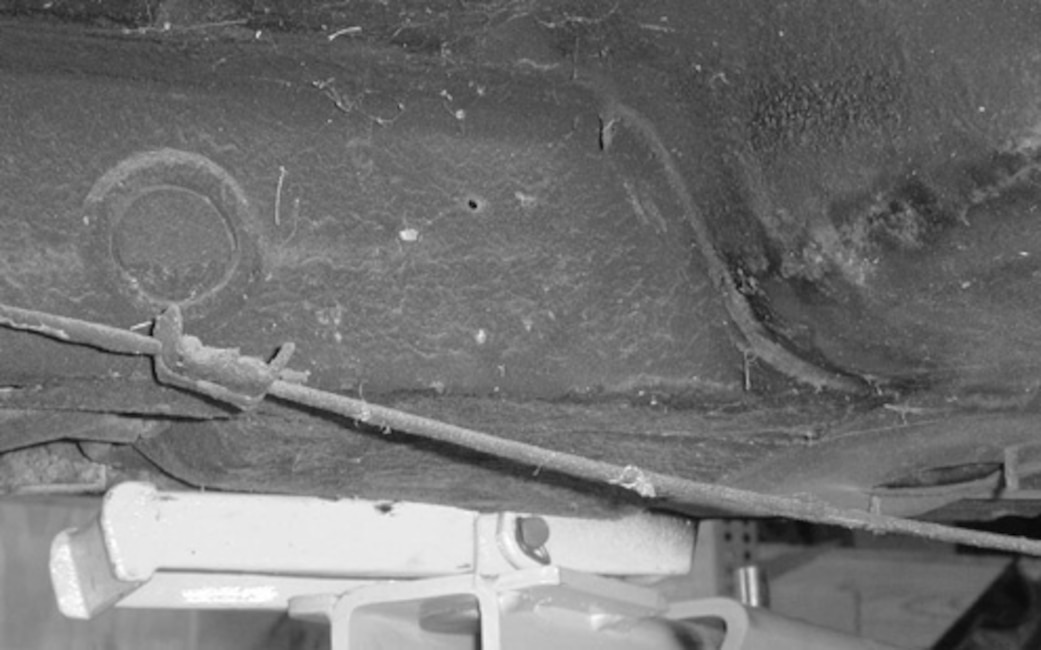 This is the area where the rear (or gusset) part of the rail will be welded in—between the grommet and the floorpan. Remove the grommet, because the heat from welding will ruin it. You can put it back once everything has cooled. This area will be cleaned to bare metal as well and sprayed with 3M Weld- Thru Coating.

We stressed the point about cleaning the areas to be welded. Shepley recommends that you apply 3M Weld-Thru Coating (he swears by it) to the areas that were cleaned. A liberal coating should be applied to all the cleaned areas to help prevent rust and corrosion. 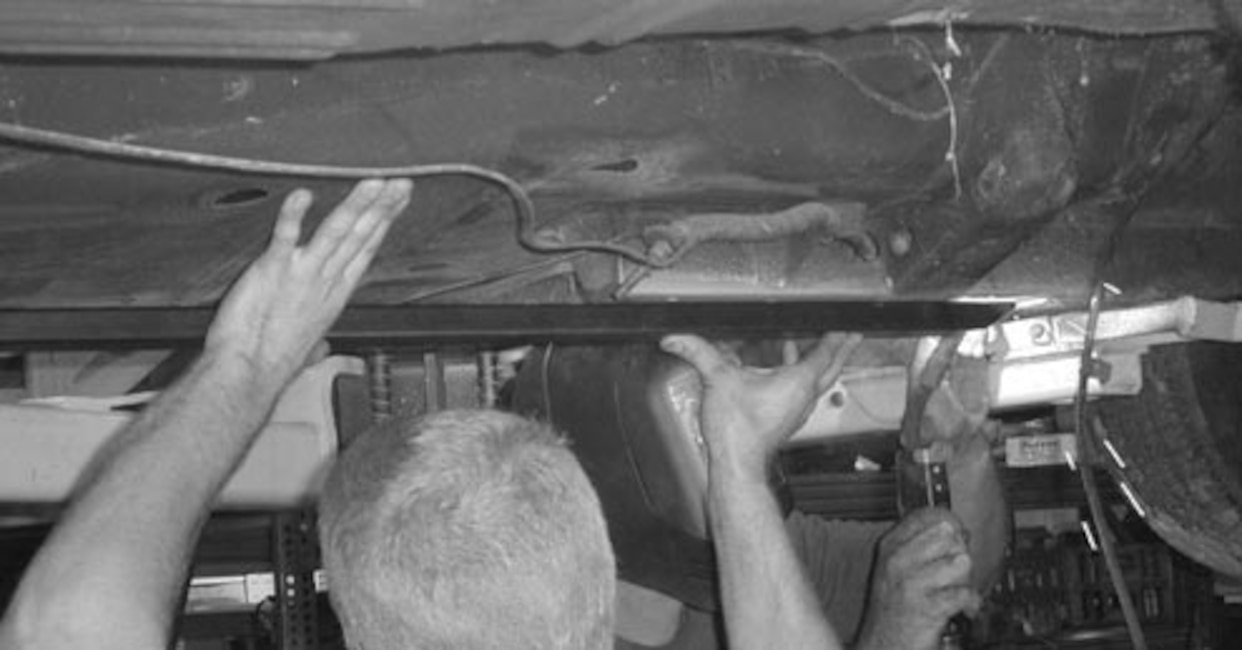 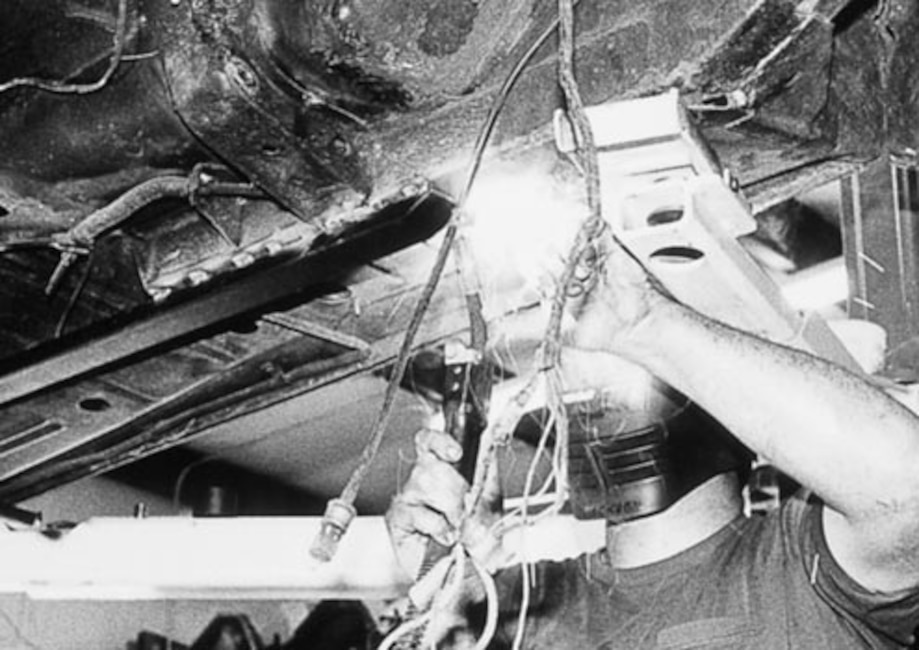 Once everything has been aligned and the placement has been checked, the front tip of the rail is tacked in place. With a little upward pressure, the rear gusset is then tacked in place to hold it up and keep it steady. The front is then welded every few inches on both sides. As you can see, there is plenty of contact area for strength. 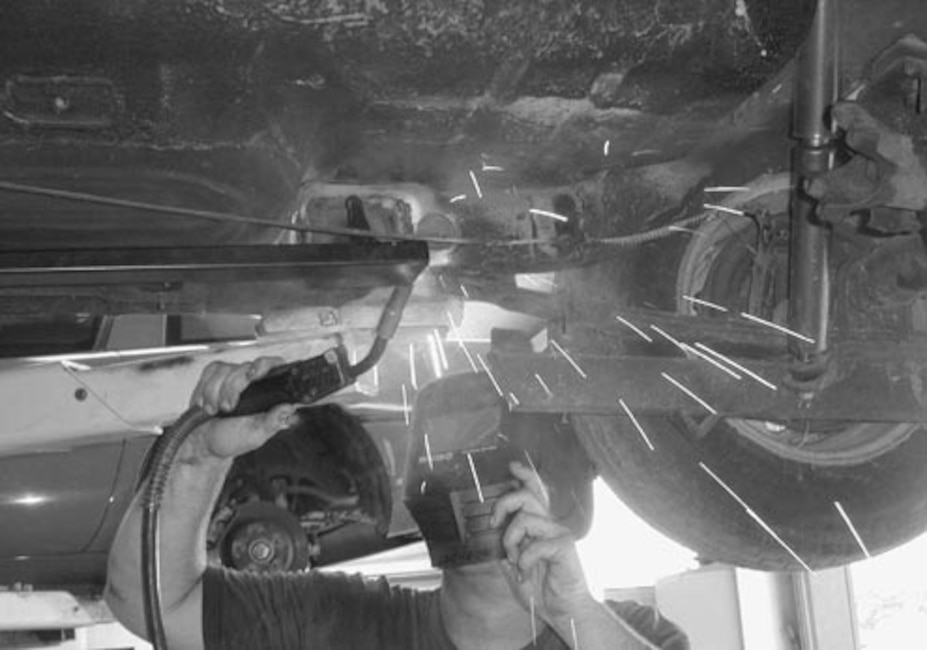 Welding the gusset can be a rather tight squeeze, but Shepley is very meticulous and determined to do it correctly. 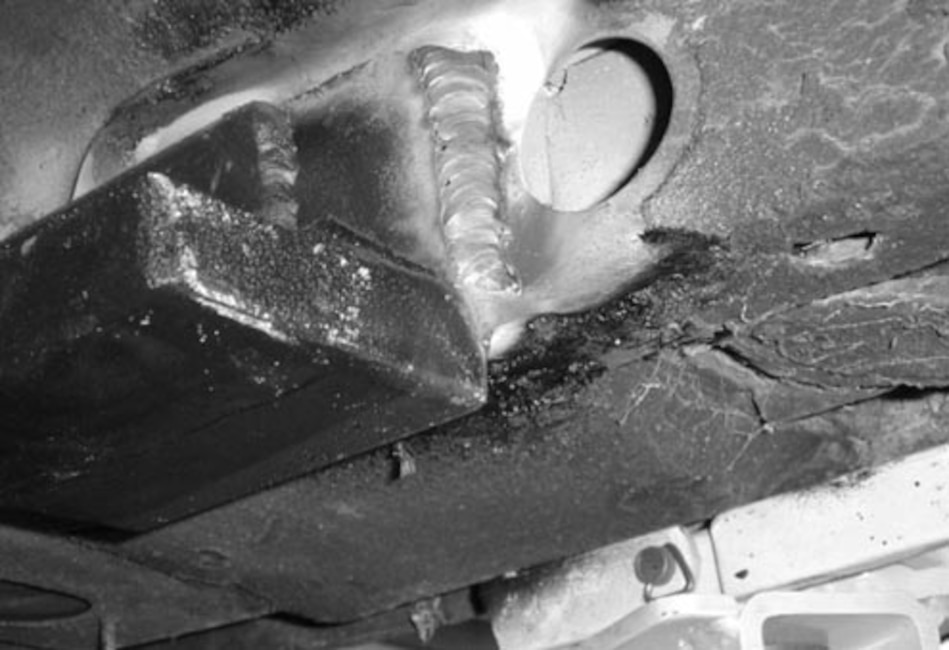 Notice the placement of the gusset and the location of the hole in the frame. Shepley allowed enough clearance for the grommet to be replaced. We believe that the weld will hold. 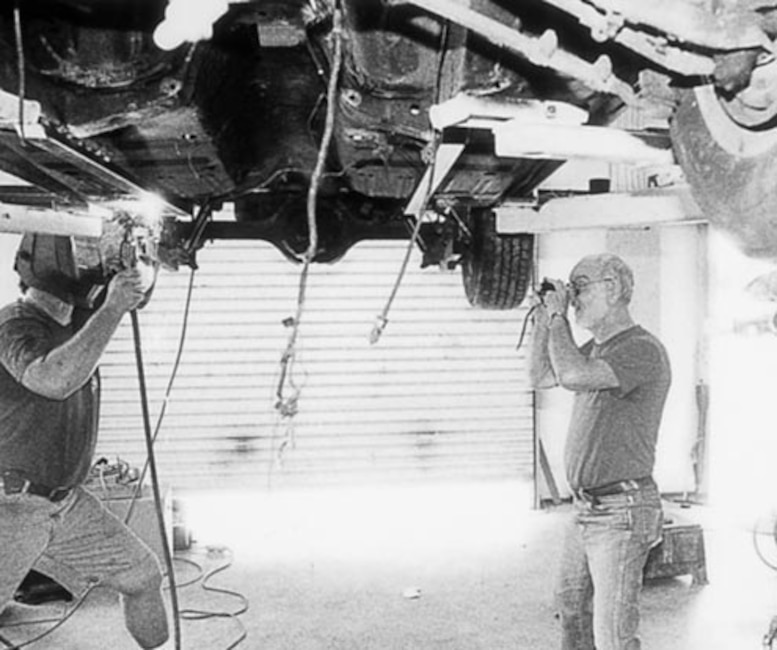 Here is the last bit of welding on the rear gusset. I’m sorry, but I couldn’t resist this shot of Shepley and Bill Ford. The posture and concentration of both of them were too much to resist. 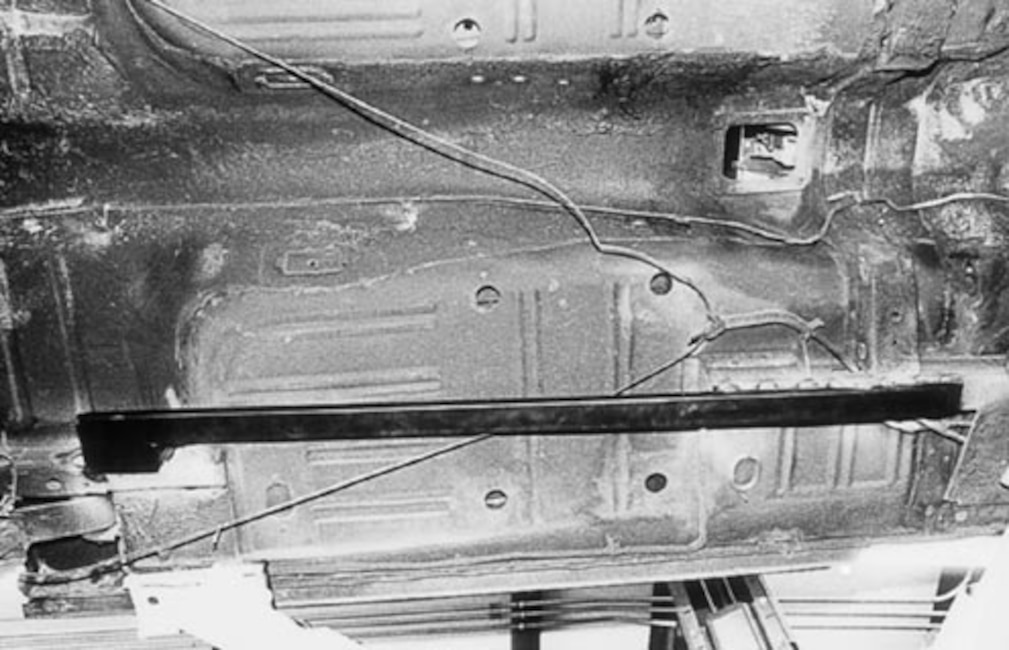 Here is a good view of the driver-side rail installed. Of course, there is one identical to it on the other side. 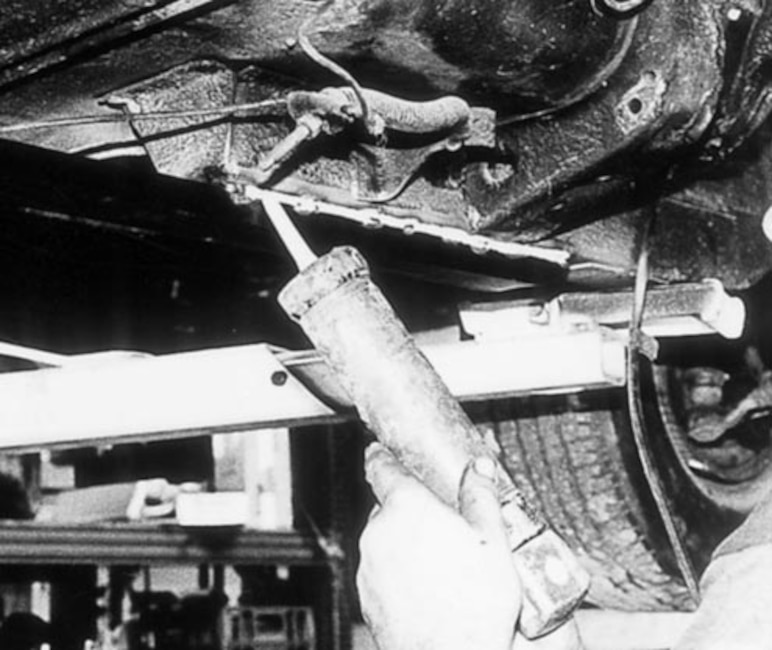 After a short break to let the welds (and Shepley) cool down (it was a very hot day), Shepley begins to caulk the front part of the rail. He uses a body-and-seam caulk by 3M, but most of the better-known brands would work as well. 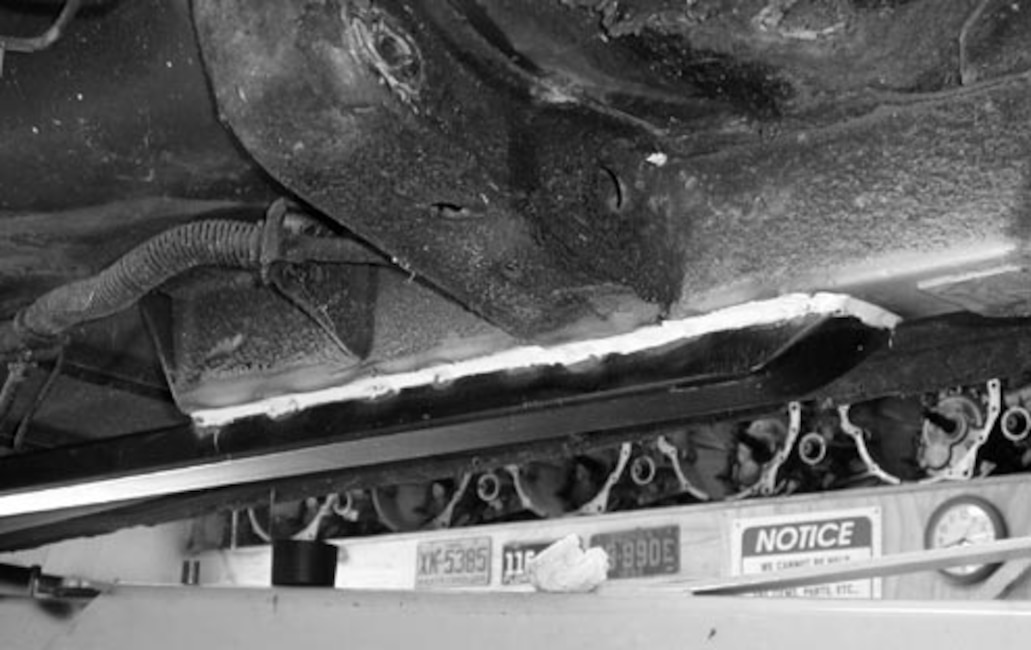 It’s starting to look good! The caulking helps to seal the open spaces between the welds, and obviously, it improves the appearance of the job. 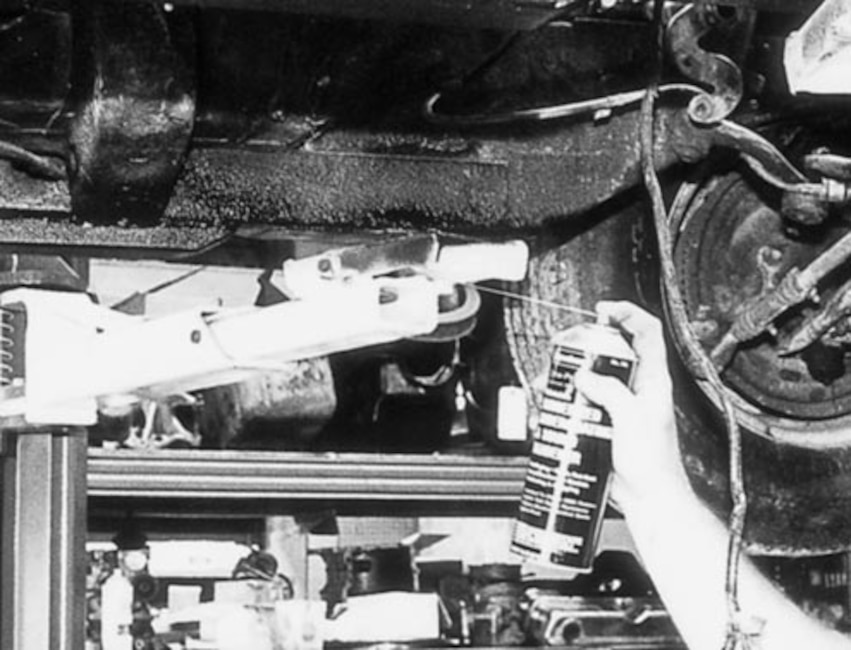 Another product tip from Shepley. As a final touch, he recommends the application of Dynatron Rubberized Under- coating and Sound Deadener to all the welded parts. We all know that fresh welds will turn a nice, rusty red in short order, and this product will help protect all that pretty work you just did. A good alternate would be to use Mar-Hyde Black Satin Trim Coating. 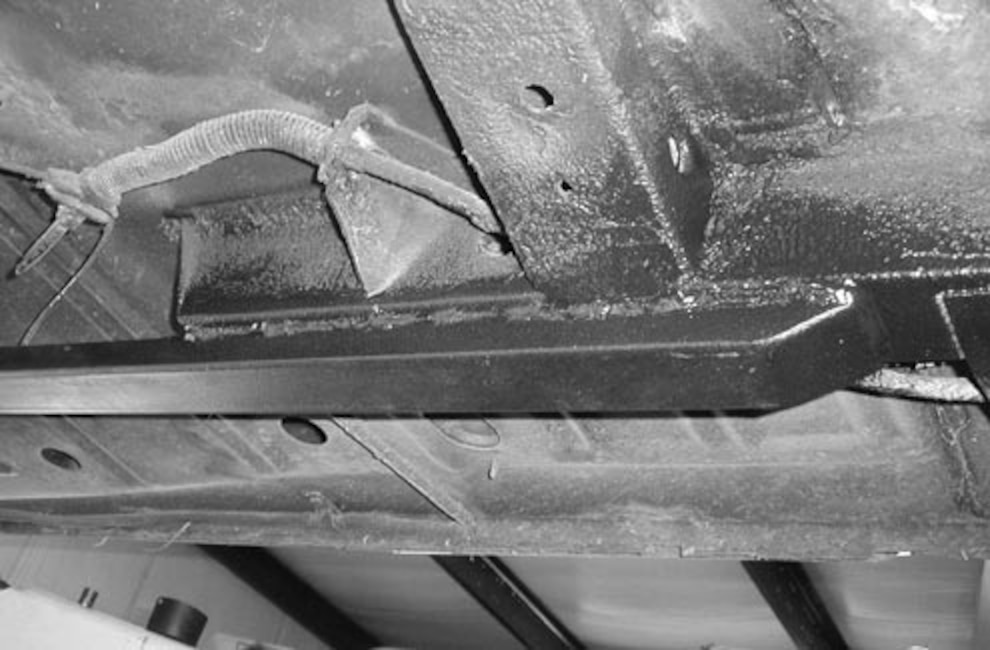 There now. This rail almost looks like it belongs on the Pony—blending in the way it does. These rails are really unobtrusive, installed up tightly, and out of sight! 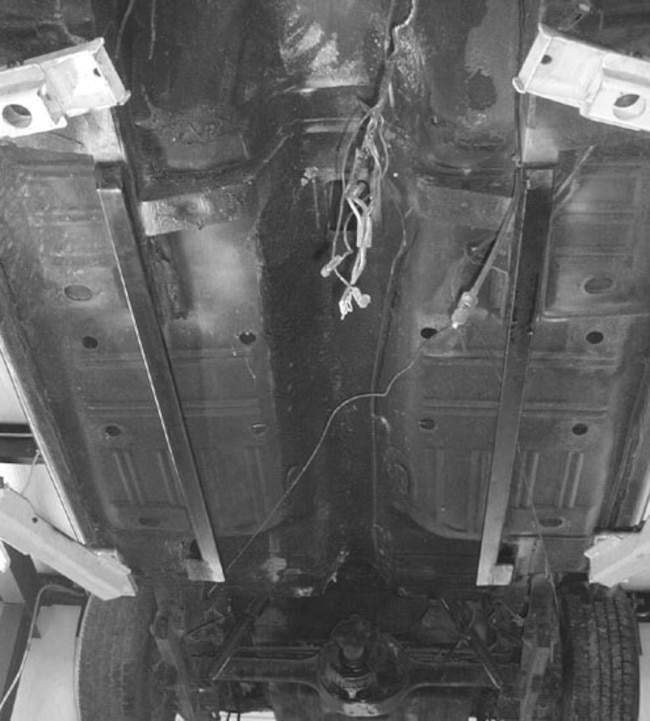 The final touches are applied, and this is how the rails look from the bottom. This is a very neat and tidy solution to a very common problem. These rails should go a long way toward eliminating those pesky torque-induced cracks in the floorpans when you just can’t resist doing those smoky burnouts.

Lordy! What was that? It shook the whole place—big time! Startled, I look over at Allen Shepley, who has this big, silly grin on his face. Then I remembered the man whom Shepley was talking to when we first drove up. I just know the guy in the F-15 is the same guy whom Shepley introduced us to: an Air Force F-15 test pilot from Robins Air Force Base. He owns a gorgeous red Mustang. The sonic boom was just his way of saying howdy to us. Somehow it seems appropriate: F-15s and Mustangs. But that’s another story.

Shepley starts off this little project by showing us the subframe connectors that he has fabricated for our Project ’70 Mach 1. They are constructed in his shop from 1x2-inch 11-gauge, rectangular, mild steel tubing. The front of the rail is wedged down and sealed to prevent snagging and to keep out moisture. The rear of the piece is also sealed and has a hefty 4½-inch gusset made from a ¼-inch mild steel plate. Ride height is hardly affected, because the connectors are only 1 inch lower than the original front subframes.

His approach is a little different from most we’ve seen, because his subframe connectors require no modifications to the car at all, no cutting of the floorpans, and no drilling. Bolt-ons cannot provide the rigidity needed, and if you’ve already installed new floorpans in your precious Pony (as we have), cutting them most likely would not be an option; however, it does require welding. Shepley used a MIG welder, but a “buzz box” could also perform the job. The price is right at $125 for the connectors and $75 for the installation. Or you can give the man $200, and he’ll do all the work. Shepley would like about 4 or 5 days of lead time for fabrication—so be nice, OK?