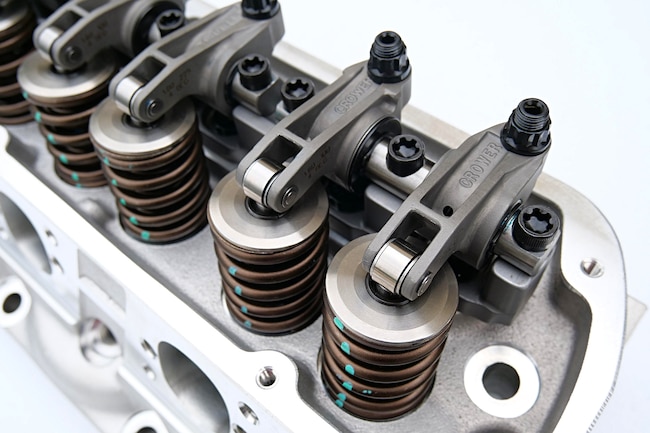 In racing, the valvetrain is one of the most highly stressed engine systems. High valve lift, high engine speed, and high spring pressures exponentially increase their demands on the lifters, pushrods, rockers, and springs. At 7,200 rpm, each valve opens and closes sixty times a second! The forces at play in the valvetrain are mind-boggling.

The rocker arms are a critical link in the valvetrain, as they transfer the pushrod's upward movement to push open the valves. Many early overhead valve engines used shaft rockers, but manufacturers soon found out that stud-mount rockers were cheaper to produce. These have their place, but when it comes to high performance applications, it's hard to beat a premium shaft-mount rocker setup.

Because of the geometry of today's high-performance engines, the studs can flex quite a bit. High-angle valve heads and higher spring pressures can cause the studs to flex before the valve even opens. If you already invested in stud-mount rockers, a stud girdle is an effective band-aid to spread the loads across all the studs—but if you're starting from scratch, a high-quality shaft-mount rocker setup is the way to go.

When building a race engine, a shaft-mount rocker system increases power and durability. The shaft system adds a stable foundation for the rockers, which greatly reduces flex. This means less of the camshaft lobe's lift is wasted moving parts around, and more lift opens the valves.

For an upcoming build, we chose Crower's shaft-mount rockers. While slightly more costly than a stud-mount setup and a girdle, we knew the benefits were worth the extra cash. Crower offers shaft-mount rocker systems in stainless steel for maximum durability and we opted for needle bearing tips to further reduce friction.

Because the shaft keeps the rocker arms aligned, pushrod guide plates (another source of friction) are eliminated.

When our race engine is buzzing through the speed traps, this Crower shaft-mounted rocker system is one less thing we will worry about.

Shaft-mounted rocker arm conversion kits, such as this setup from Crower, reduce valvetrain flex, friction, and increase durability. All this adds up to more power.
Shaft rockers reduce friction by reducing flex and increasing rocker length. The steel mounting base is dramatically more rigid than a stud, and the rocker pivot is offset toward the pushrod to increase the rocker arm's radius, reducing rocker tip scrub across the valve.
The rocker arm shaft keeps the arms aligned, eliminating the need for push rod guide plates. These stainless steel shaft rockers use an adjustable pushrod cup to set valve lash.
Crower includes this handy tool for setting up the proper rocker shaft height for the given total valve lift.
The rocker shaft height is adjusted with included shims that install between the head and the mounting base.
Crower uses Torx-head bolts to fasten the rocker shafts to the base.
Crower shaft-mount rockers are available for a wide variety of cylinder heads, including these TFS High Port race heads.
The mounting base bolts to the heads using the existing stud mount provisions, so extra machine work isn't required.
To further reduce friction, Crower offers a needle-bearing roller tip option to further reduce friction and valve guide wear. Note how the rocker arms are offset for the intake and exhaust valves on these cylinder heads.
The Crower stainless-steel shaft rocker arms are clearance for large valve spring retainers as well.